A Walk Along the Credit Tightrope 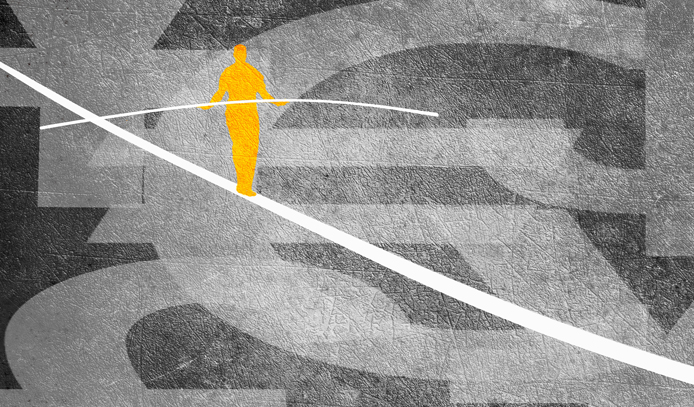 Post the financial crisis of 2008/2009, a combination of ultra-low interest rates and Quantitative Easing (QE), has triggered a huge appetite for yield. As investors have chased higher income-producing securities, the yield spread between government bonds and investment-grade securities, as well as that between corporate bonds of varying credit quality, has compressed towards pre-crisis levels.

However, the factor that is far less publicized is the effect of legislation on prospective liquidity in fixed income (FI) markets. In response to regulations such as the Volcker Rule in the US and Basel III in Europe, banks have rapidly de-risked their operations and raised capital levels by selling bond holdings, in addition to curtailing their previously substantial role in bond trading and market making. Rather worryingly, the ownership of large amounts of FI securities appears to have shifted to retail investors via indirect ownership through mutual funds and ETFs. A further concern is that corporate bond issuance has surged, as companies have sought additional lines of credit because banks have been more interested in shoring-up their balance sheets than lending.

Clearly, the actions of both monetary policy-makers and regulators in the aftermath of 2008 have been directed towards insulating the banking sector from systemic risk. However, in the same way that leverage has been shifted from the private to the public sector, it could just be that the threat of systemic risk has been moved from the banking sector to a component of the asset management industry, which is effectively acting as a ‘shadow banking clearing house’ for companies seeking credit and investors hunting yield.

Echoes of 2008
As such, according to a number of sources the Fed has been giving some thought to the implementation of exit fees on mutual funds and ETFs to potentially stem outflows. While we feel strongly that some form of policy intervention is required to avert a potential 2008-type scenario, we are not sure that this is the answer. Exit fees would effectively tell investors that anybody in their right mind would be selling if they did not have to pay for the privilege to do so. In our view, short-term measures, like exit fees, will do nothing to avert the ultimate scramble for the exit in the event of materially higher interest rates.

Scared money
While the fact of high retail ownership and historically low yields presents a case for exiting credit markets, a powerful rationale for maintaining exposure to the asset class is that capital is likely to flow rapidly towards assets which are perceived to be of ‘lower risk’ should geopolitical tensions continue to escalate. In such an environment, government bonds benefit most from their perceived ‘safe haven’ status. Invariably, prices and yields get distorted, as rising uncertainty means that investors become more concerned with the return of their money, rather than the return on it. We have already seen examples of investors paying a premium for ‘safe haven’ government bonds in recent years when yields on US and German short-term government securities turned negative on a couple of occasions.

Walking the credit tightrope
It is not our intention to be alarmist, or indeed to suggest that investors steer clear of the fixed-income markets altogether; it is simply the case that we want to convey a number of the factors we consider in portfolio construction.

Moreover, we fully understand that investors would not wish to jump off the merry-go-round while the music is still playing, and hesitant central banking policies, with opaque ‘forward guidance’ in the US and UK, and the potential of QE in the Eurozone, provide a rationale to believe there is still ample time before we are likely to see any intense market reaction.

The hunt for yield has created some major distortions in the pricing of fixed-income securities that will have to be corrected at some point in the future. Moreover, the initial catalyst for such a correction is likely to be a shift in monetary policy. However, the timing of the policy shift and the speed at which policy is ‘normalized’ are questions that nobody knows the answers to; ‘forward guidance’ has thus far proved more apt to mystify than clarify.

Nevertheless, we still retain the ability to construct our portfolios in a way to ensure that they demonstrate resilience in the face of certain key scenarios, even if we are unclear on timings. For example, we know that monetary policy will ultimately become less accommodating.

Monetary normalization
In theory, the path to normalization could begin through QE reversal (the central banks selling the assets they have purchased), rather than raising interest rates. However, the reason that rate hikes are widely anticipated is that these should help to cool overheating housing markets. Conversely, reversing QE would simply raise long-term borrowing costs for businesses and governments alike. Consequently, this may benefit low-duration investments that we view as less sensitive to rising interest rates than typical fixed-income strategies.

Central bank awareness
Similarly, our market observation is that we are unconstrained in terms of geographies and segments of the credit spectrum. Given that we are aware of the extent of retail ownership in US credit markets, the perception is that the Fed is being complacent in this respect and the probability that measures such as exit fees will ultimately prove ineffective.

Conversely, where the Fed may be considered complacent, the ECB appears fully aware of the extent of the issue. In its May Financial Stability report, the bank cited ‘an abrupt reversal of the global search for yield, amid pockets of illiquidity and likely asset price misalignment’ as the number one risk to the financial stability of the Eurozone.

While the ECB’s rhetoric has thus far proved more substantive than its policies, the need for further monetary accommodation is genuinely appreciated and reflected in both Draghi’s Jackson Hole Speech and the 4 September rate cut. Consequently, we have increased our exposure to Europe.

Credit premium redefined
In terms of positioning within the credit spectrum, we are wary of the potential risks facing the high-yield segment. We are entering the stage of the economic cycle that typically favours high-yield, because a tightening of monetary policy is usually a portent of better economic times and lower defaults, while high-yielding securities are logically less sensitive to rising interest rates. However, we are concerned that the default rate has been artificially compressed by ultra-low interest rates for many years, and that the beginning of a return to ‘normalization’ could actually be the catalyst for defaults to spike. In addition, high-yield securities seem certain to be more sensitive to rising interest rates this time around, simply because the yield premium on offer is so much lower than the historical average. From the opposite perspective, we feel that, since leverage has progressively been shifted from the private to the public sector since 2009, the yield premium that IG (IG: Euro Corporate Bonds) corporates offer over government securities is effectively a risk-free bonus. Thus, we believe that the prospect of default on the part of a heavily indebted government is potentially greater than that of an IG corporation with a robust balance sheet. As such, we are finding a higher number of compelling opportunities in IG compared to other segments of the credit spectrum.

In summary, we believe that the most effective way to balance the implications of years and years of unconventional monetary policy, and its ultimate reversal, is to take an idiosyncratic approach to portfolio construction, bringing a risk-adjusted perspective to every single investment decision.

Jon Mawby joined Man GLG in September 2012 to run the Global Corporate and Strategic Bond portfolios. Prior to that he spent almost seven years at ECM Asset Management, where he was lead portfolio manager focusing on multi-asset class credit funds and a member of the investment, sector strategy and peer group review committees.

Andy Li joined Man GLG in May 2014 to co-manage two major long-only credit strategies. Prior to joining Man GLG, he spent over six years at ECM Asset Management, where he was a lead portfolio manager for a European financials fund, and co-managed the global Absolute Return Credit fund.