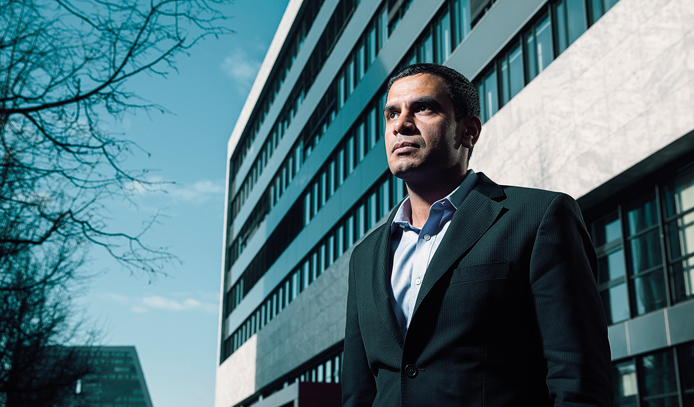 Deepak Gulati is one of The Hedge Fund Journal’s “Tomorrow’s Titans” in the 2014 survey, which was sponsored by EY. Many in the survey spent years yearning to break away from larger organizations, but Gulati would have been perfectly happy to remain in the role of global head of proprietary trading at J.P. Morgan that he held between 2008 and 2013, had the Volcker Rule not forced the group’s closure. His team was distinguished not only by investment performance but also because it was the last prop group remaining in any US bank. Gulati’s team focused purely on proprietary trading, with no flow-driven or market-making activity, as J.P. Morgan’s franchise business had been completely segregated, and in separate buildings, since Gulati took the helm.

Gulati views ultra-low volatility as anomalous, and he finds plenty of other quirks in the volatility markets. Why might these inefficiencies exist, and persist? Gulati views volatility in late 2014 as akin to the cratering oil market – with “a large imbalance between supply of, and demand for, volatility by end users”. Supply of volatility has increased, particularly due to structured products selling optionality, especially in Asia. As fixed income yields have collapsed, this is all part of the hunt for yield, and Gulati judges it is “perverse and dangerous, just like adding portfolio leverage, which results in lop-sided and mispriced risk/reward very similar to what we saw in 2007.”

Meanwhile demand for volatility has actually decreased, mostly because investment banks, hampered by the very same regulations that forced Gulati to set up Argentière, cannot hold as much inventory, and so have far less need to hedge their books.

Gulati holds the conviction that owning protection at current levels could do very well – and, more surprisingly, “if nothing happens you can still do very well.” Consequently, Argentière’s positioning is very similar to the late 2007 and early 2008 stance, which preceded Gulati’s banner year in 2008. But, he stresses, “This is not motivated by a macro view that equities will crash, but is really due to the pricing of volatility and the profile you can build given the levels of volatility now.” Gulati’s top-down view is very close to that of Allianz chief economic adviser, Mohamed El Erian, who argues that the October 2014 spike in volatility is a sign of things to come. El Erian cautions that the equilibrium is fragile and that central banks cannot always be relied upon to step in and stabilize markets.

Gulati opines that “the cycle of the past five years is coming to an end, and we are starting to see divergences between central bank policies, adding to uncertainty and volatility.” Amongst developed markets, the UK and US seem set to normalize monetary policy, whereas Japan and the Eurozone are still expanding their QE purchases. As Argentière trades volatility globally, the manager can also take advantage of volatility around monetary policy cycles in other markets such as China, which recently cut interest rates, and where the local equity market has in late 2014 crashed upwards, with a 60% trough-to-peak rally.

Argentière’s investment approach would expect to capitalize substantially on events such as the “tech meltdown” or the 1987 stock-market crash – “Black Monday”. So while Argentière is clearly long volatility, nobody should assume that Gulati is simply buying options and sitting on them, because that entails paying away time decay, and that has caused a slow bleeding death for some volatility funds. That Gulati’s team continued to generate money from their core volatility strategy, even as volatility collapsed between 2009 and 2012, is partly explained by trade structuring and risk management – the second and third stages of the Argentière investment process, which are designated greater importance than the initial idea generation.

Over the years Gulati has worked with most of the risk management software systems; Argentière spent over a year reviewing a wide range of packages, before choosing one that was “the most customizable and easy to integrate with all of the internal tools we have built over the years.” The clear implication here is that even the best off-the-shelf systems have to be complemented with Argentière’s own bespoke risk techniques.

Structuring and risk management paramount
On structuring Gulati says, “Various arbitrages can be used to finance time decay. Arbitrages can exist between the VIX, variance swaps and volatility swaps. Dislocations across term structure and skews can also provide opportunities.” Thinking laterally, Gulati also puts on relative value trades between equity and currency volatility, or between credit and equity volatility. Correlation and dispersion trades are another sub-strategy that Argentière can make occasional excursions into. Yet 15 years of experience have taught Gulati that none of these approaches alone will necessarily work all the time. Hence, “we size each one appropriately so we don’t get blown out of the water,” he cautions, and that process includes “understanding other participants’ positioning and the key trigger points.”

So, the big picture is simply a market flooded with a surfeit of volatility – and the sheer volume of open interest in the VIX, reaching records each month, adds to the quantum of opportunities. There are also more technical reasons behind some specific arbitrages. Market segmentation is one angle here: Gulati claims that “90% of those who trade the VIX are not end users, but rather retail or pension investors who are not professional volatility experts and who use the VIX as a hedge.” As such, these participants may not always be paying attention to the nuances of relative valuation between volatility instruments.

Another obstacle to eliminating pricing anomalies is that, even amongst the professional volatility community, not all market makers have enough ISDAs in place to access sufficient liquidity in the over-the-counter (OTC) space. Gulati has first-hand experience of OTC trading, having started his career in 2000-2002 as a market maker in Switzerland, and he recalls this was “valuable experience to understand pricing, liquidity, and slowly growing risk bit by bit.” Textbook theories about replicating variance swaps with forward volatilityproducts are perfectly accurate in an abstract sense, but in practice the need for a spectrum of ISDAs constitutes a barrier to entry that delays the re-convergence mechanism. The majority of what Argentière trades is exchange-traded, but the manager does have a basket of ISDAs in place to facilitate shopping around for keener prices on OTC trades. This matters because regulators have not yet migrated all volatility trading onto exchanges.

The term structure of volatility can also provide opportunities. Just as bond managers pick up “roll down” returns from the yield curve, so too volatility traders can extract “roll down” returns from the term structure of volatility. The term structure and skews in the US are very steep because heavy exposure to equities creates demand for buying protection, making puts more expensive, while corporates such as Microsoft often sell call options on their own stock, cheapening them. In the US there is not enough supply and demand on the other side of these trades, Gulati reckons.

But he observes that Asia provides different types of structural inefficiencies: “Asia has the opposite patterns. Instead of buying puts Asians tend to sell longer-dated puts for yield enhancement, which depresses the curve, resulting in a shallow curve with low skew. And instead of corporates selling calls, retail investors in Korea are buying short-dated calls, which flattens skews and term structures.” Asia in general can account for as much as half of Argentière’s volatility book, which opportunistically allocates capital globally. There is plenty of liquidity in Asian markets, such as the Nikkei, Kospi and Hang Seng China Enterprises indices. Inter-regional relative value views are also taken, so Argentière might be long or short of Asian versus an opposite position in US volatility. Says head of marketing and investor relations, Barry Thomas, “Europe is logistically the best location for trading global volatility, and some staff come in early to cover part of the Asian session.”

Argentière is named after a ski resort in France near to where Gulati grew up in Switzerland, so the Zug office location is in some ways a homecoming. Argentière, which obtained SEC registration prior to launch, has also in 2014 opened a US office, in Chicago.

In early December Gulati contended that it was possible to structure trades such that “we were getting paid to own protection” – conceptually, the profits from “gamma extraction” or monetizing realized volatility were outweighing time decay, or the cost of the option structures. Gulati had not witnessed implied volatility consistently trading below realized volatility since 2007, and he argues that when this arises, “You just close your eyes and buy.” So Argentière was long of volatility across all regions, but as always the time decay cost was mitigated through careful structuring. Elaborating on his positioning, Gulati states, “We are in effect long protection as well as being uncorrelated with equities and other hedge fund strategies.”

As well as being implicitly short equities, Argentière aims to create a convex pay-off profile that could produce profits from large moves in either direction – so the rare phenomenon of an upwards crash could also be lucrative. Within the volatility book, directional and relative value volatility are the main strategies, but convexity, premium, dividends, correlation and dispersion can also be pursued when opportunities arise. To focus on one of these, dividend futures are a fairly new market, and one of the few markets where Europe offers better liquidity than the US. Argentière has been active in taking both long and short positions. Back in 2012, in the wake of the Euro crisis sell-off, Argentière thought that implied dividends were too high and so shorted them. More recently, in 2014 Argentière took advantage of the October panic to buy into European dividends,which offer the bonus of positive roll-down carry due to a downward-sloping curve. This inefficiency, like so many others, is attributed to structured products, which in this case are long of more distant dividends. The opposite curve shape applies in the US, and Argentière has also traded Nikkei dividends in Japan.

Event and quant equity strategies
If Gulati has sometimes been short dividends, he has never been net short of volatility. While he would “never say never”, his historical experience has been that “if volatility trades at a premium there are probably better opportunities elsewhere. So if it makes sense to sell volatility, that is only a derivative of other opportunities that are probably at far bigger and better discounts than the volatility premium”.

These opportunities could include spreads on merger arbitrage or risk arbitrage deals or other types of event driven trades. In 2014 the allocation to the event book has been relatively small, partly because deal breaks such as AbbVie’s aborted bid for Shire Pharmaceuticals have made the strategy challenging.

In contrast, the quant equity book, run by another old J.P. Morgan colleague, Luis Fernandez, is unusual in being the only Argentière strategy that does not use options – it trades only cash equities. This sleeve also differs from the other Argentière strategies in that for the time being its analytical inputs are purely technical – although fundamental data could be added to the mix later on.

Institutional infrastructure
The speed with which Argentière has reached a critical mass of assets is partly a function of how mature the business was from the outset. Says Thomas, “A big investment in people, technology and infrastructure made us very institutional from day one, setting us apart from other launches.” For instance, Argentière’s investment team already contains nine professionals, with another 10 on the non-investment side.

Assets of $620 million are steadily growing towards an initial target of $1 billion and, based on Argentière’s investment approach, we might speculate that an extreme event in the markets could bring the firm to this target sooner rather than later. In October Argentière would have made more money if volatility had remained at elevated levels, rather than coming round full circle to where it began the month. Argentière has no regrets about having stayed long of volatility throughout October, and Gulati is clearly excited about the outlook for his strategy.