Originally published in the November 2018 issue

Could an equity market correction prolong the nearly decade-long US economic expansion, thus delaying the onset of any recession? It seems like an odd, counterintuitive question but the truth is that a sharp pullback in equities might be exactly what is needed to keep the Federal Reserve from inadvertently throttling the economic expansion with one rate hike too many.

First, the equity market is not always a great indicator of economic recessions. Remember the Great Depression of 1987 and 1988? How about the 1998-99 recession? Or the 2011-12 downturn? If you can’t recall those economic disasters, you’re not alone. They never happened. Sharp selloffs in equity markets, however, did happen: -36% between August 1987 and October 1987; -20% in July and August 1998 and -22% in the summer of 2011. No recession followed on the heels of any of these selloffs. 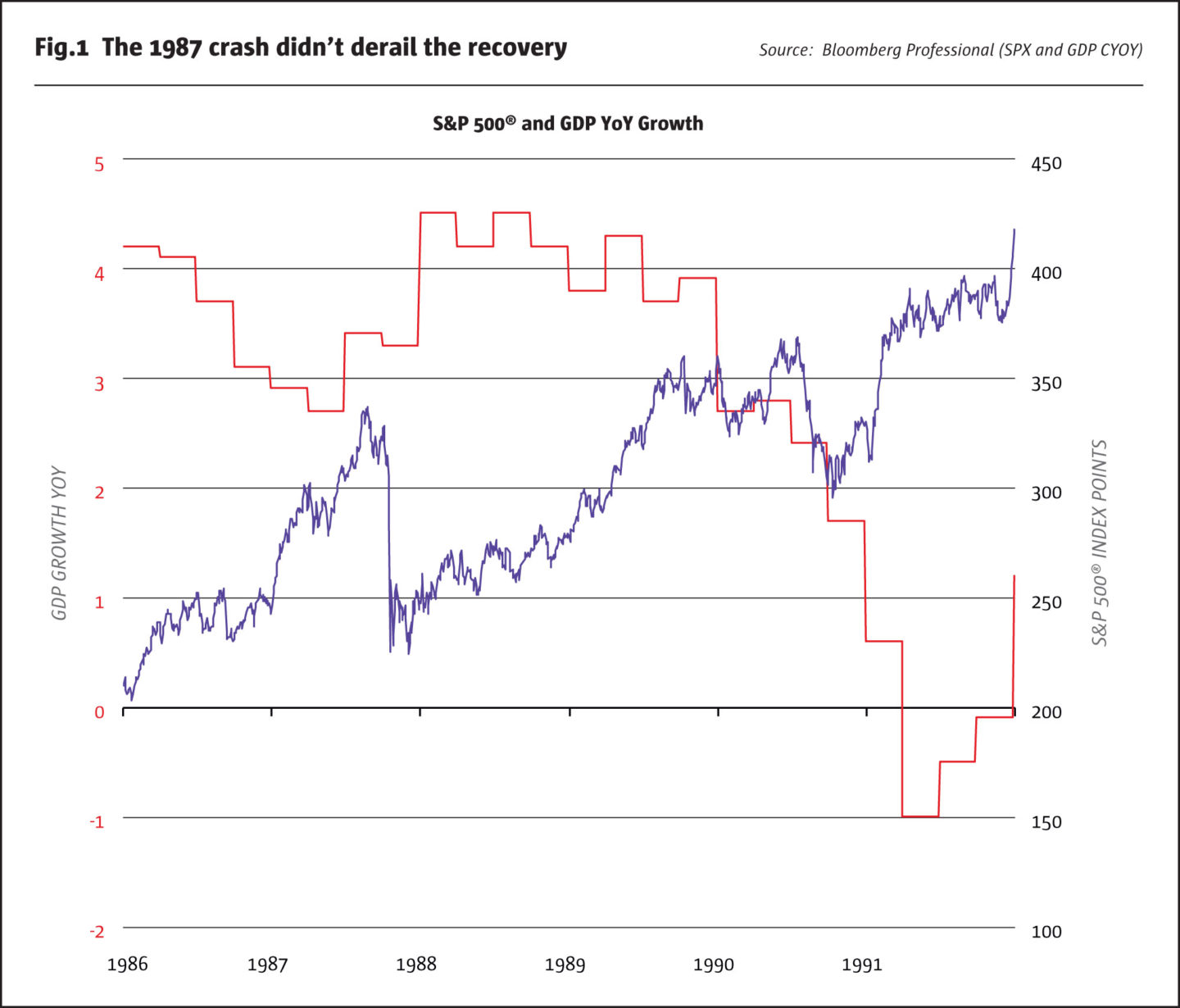 Temporary Fed easing in response to distress on Wall Street sealed the deal. In the months after the October 1987 crash, the Fed cut rates from 7.25% to 6.5% and provided liquidity to the financial system. In 1998, the Fed used the same playbook, organizing the orderly wind down of fund manager LTCM as it cut rates from 5.5% to 4.75%. In both cases, the yield curve steepened temporary. Growth got a boost. 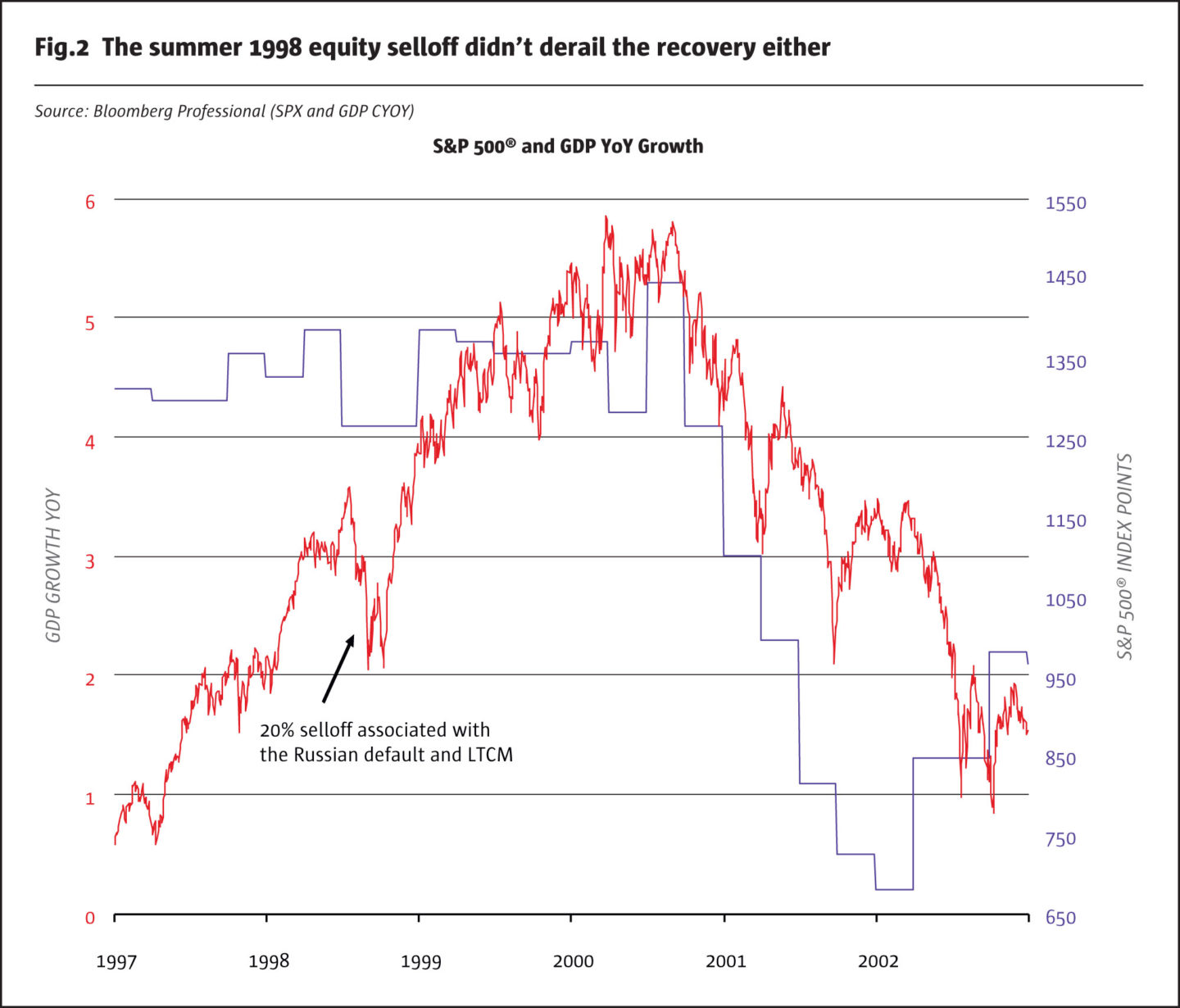 In each case, the economy eventually experienced a recession but only years later and after the Fed resumed tightening. For instance, the Fed began tightening policy in Q2 1988 and had inverted the yield curve by 1989. The economy went into a recession in 1990 and 1991 (Fig.3). Likewise, the Fed began taking back its post-LTCM accommodation in Q3 1999 and inverted the yield curve in 2000. Growth finally ground to a halt in 2001 and 2002 (Fig.4). 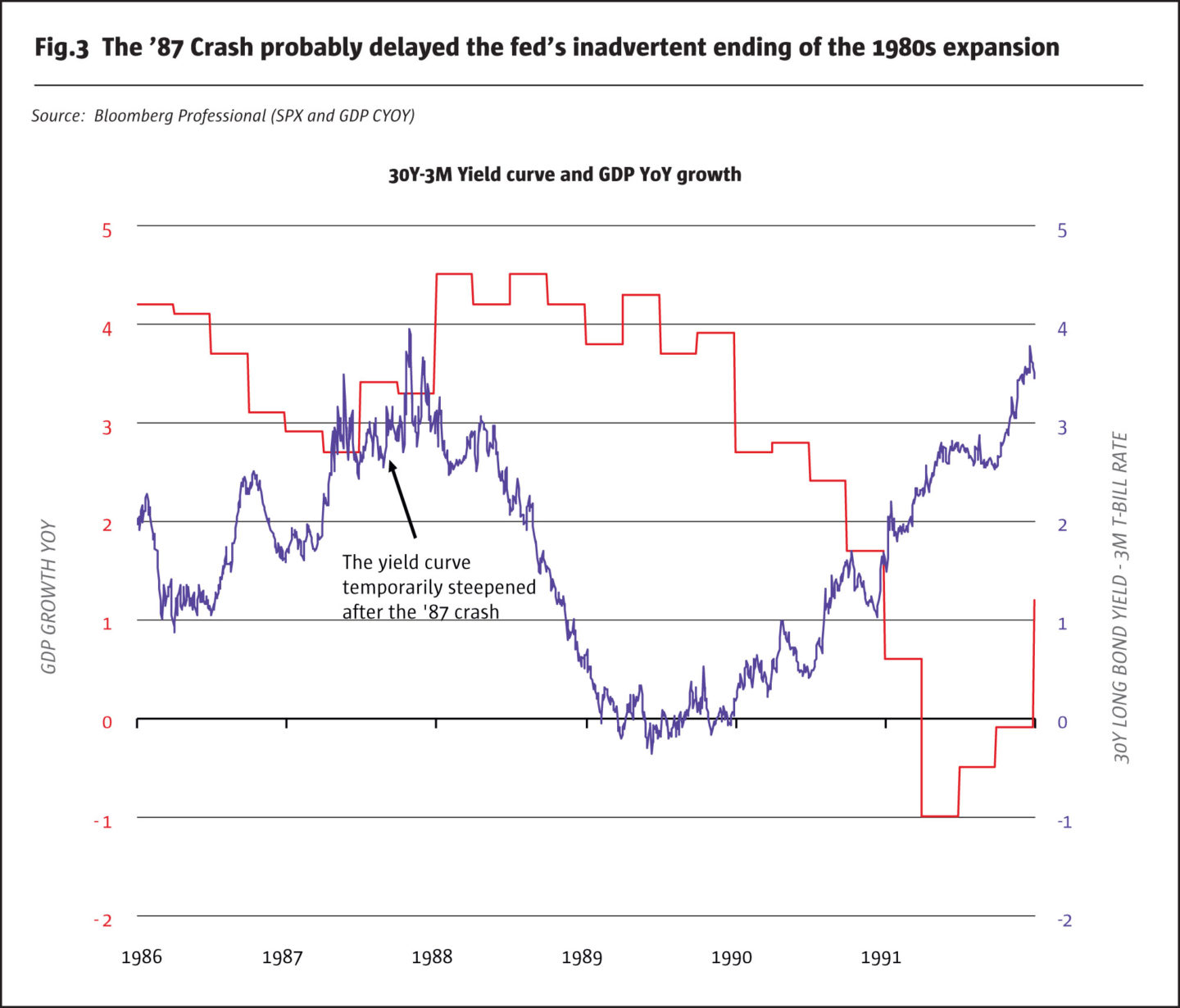 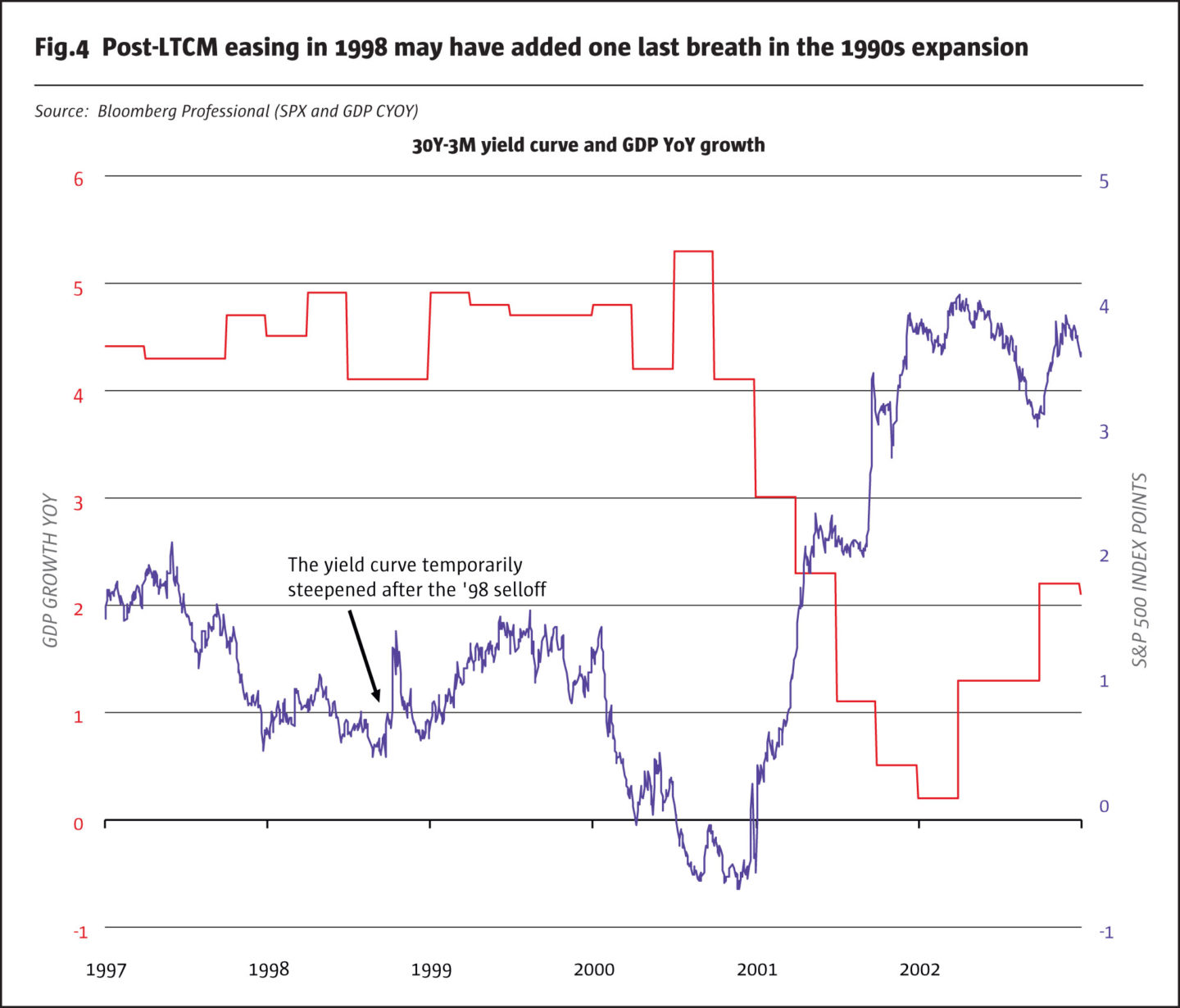 What’s remarkable about the 1990 and 2001 recession is that the equity market didn’t really anticipate either one and only sold off (mildly in the case of the 1990 recession) after the recession was well underway. It was also slow to react to the onset of the subprime mortgage crisis in 2007.

After the correction in the summer of 2011, then Fed Chair Janet Yellen ramped up the third phase of quantitative easing (QE3), which coincided with (although probably didn’t cause) continued economic recovery. Equities continued higher until late 2014, when they had one year of consolidation before continuing higher in 2016 and 2017.

What the current equity market selloff says about the economy will depend in large part on how the Fed responds. The Fed’s “dot plot,” an internal forecast of where the Fed thinks rates might be headed, suggests that the central bank is planning to hike five or six more times between now and 2020; once in December, three times in 2019 and one or twice more in 2020. If the Fed were to hypothetically stick to such a path of hikes even in the face of an equity market selloff, the likelihood is that the yield curve would continue to flatten or invert as the central bank pushed up short-term rates while investors fled equity and credit products for the relative safety of long-term government bonds. Unlike the stock market, whose fluctuations are an unreliable gauge of future economic activity, the shape of the yield curve is a much stronger, albeit still imperfect, one.

The past three Fed Chairs, however, have come with put options. Each one eased policy in response to equity market distress signals. Will the Fed’s new chair, Jerome Powell, do the same? With inflation quiescent and wages rising at only 2.8% per year despite sub-4% unemployment, he could certainly make a case to back off rate increases in the face of a severe spike in volatility. That said, backing off rate increases becomes harder when one is trying to maintain the appearance of independence in the face of public criticism from Administration officials. 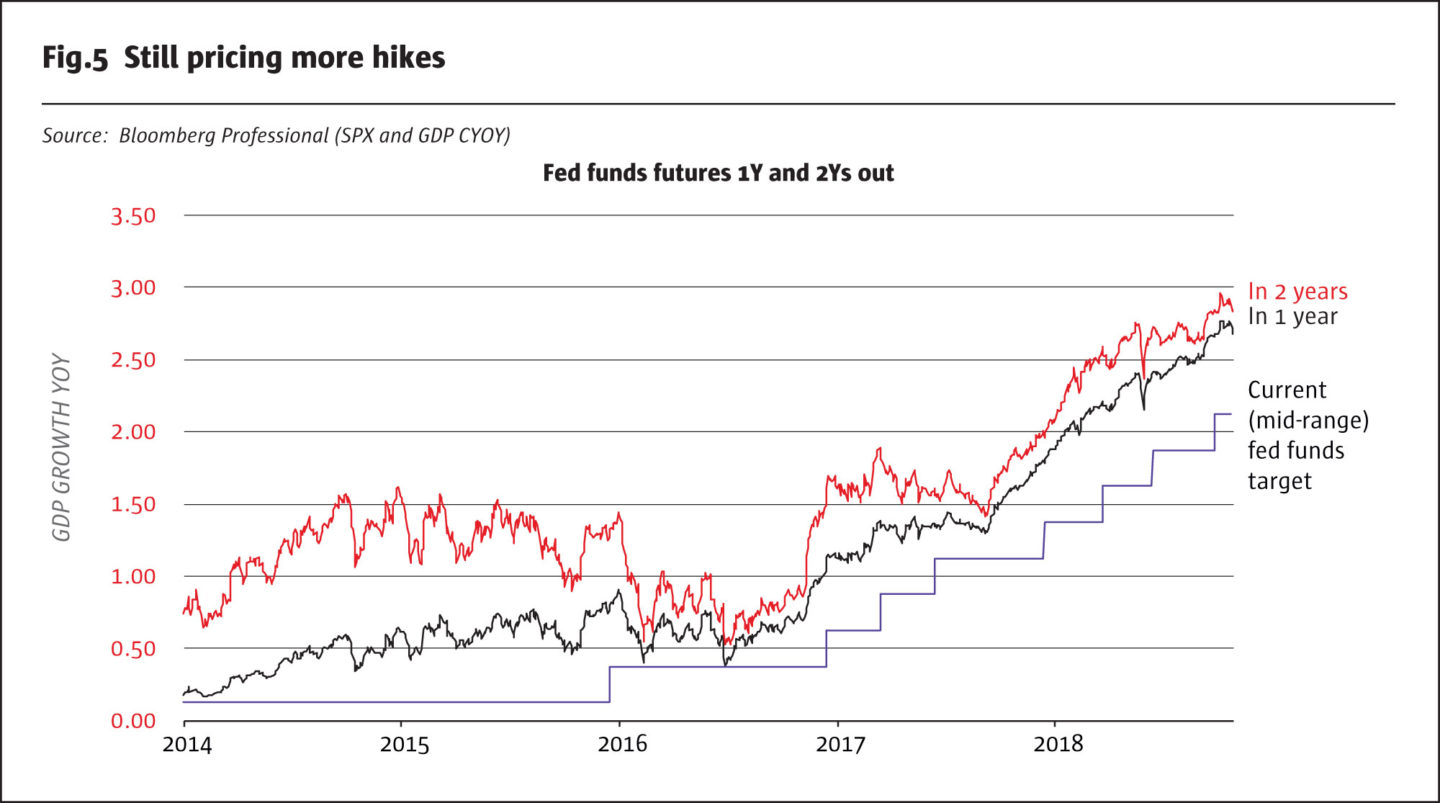 For the moment, the selloff in the equity market hasn’t produced much of a reaction from Fed funds futures markets, which still anticipate further Fed rate hikes (Fig.5) – although fewer than what the Fed’s “dot plot” suggests. If stocks do experience a sharp decline and that forces the Fed to reverse the recent yield curve flattening (Fig.6), that might once again extend the expansion (Fig.7). 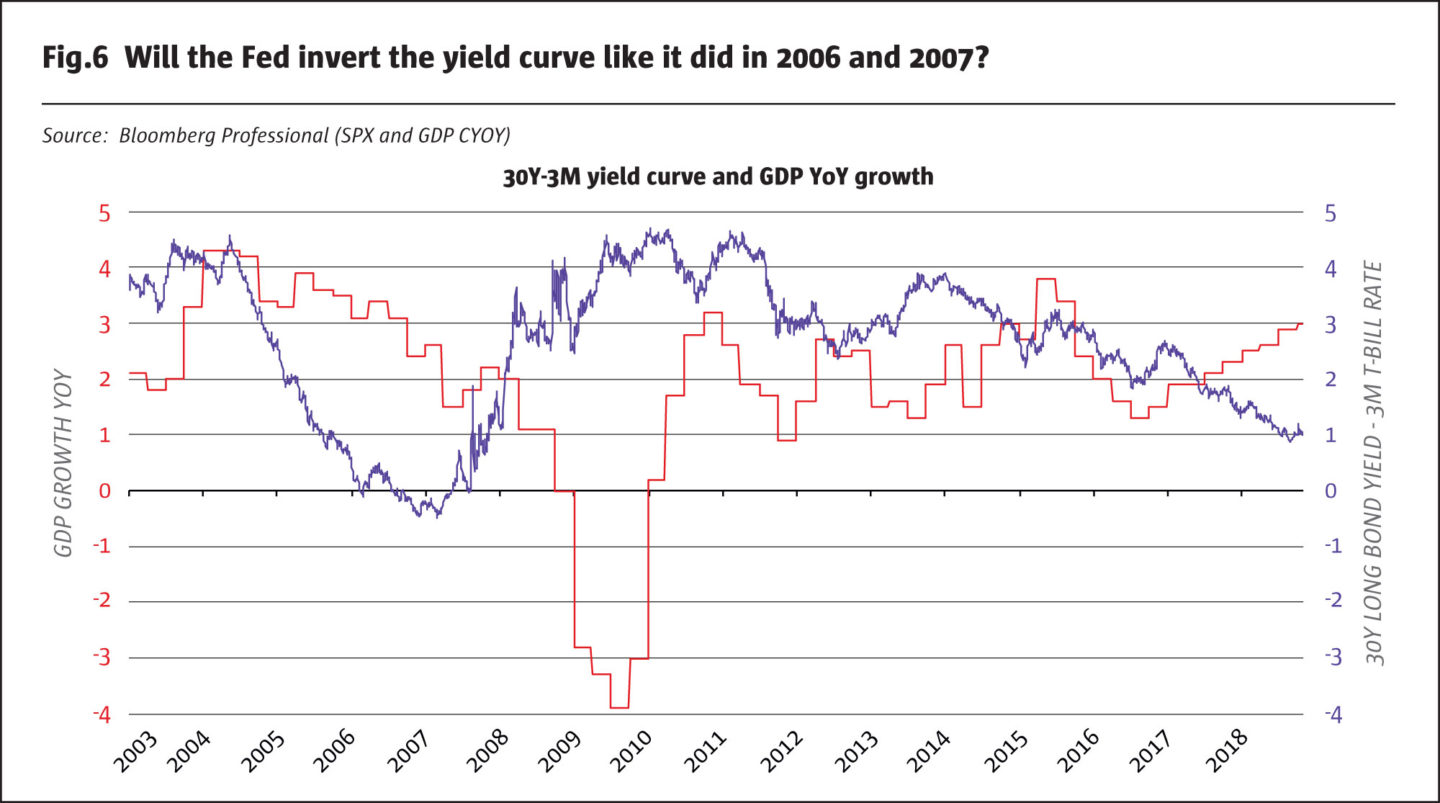 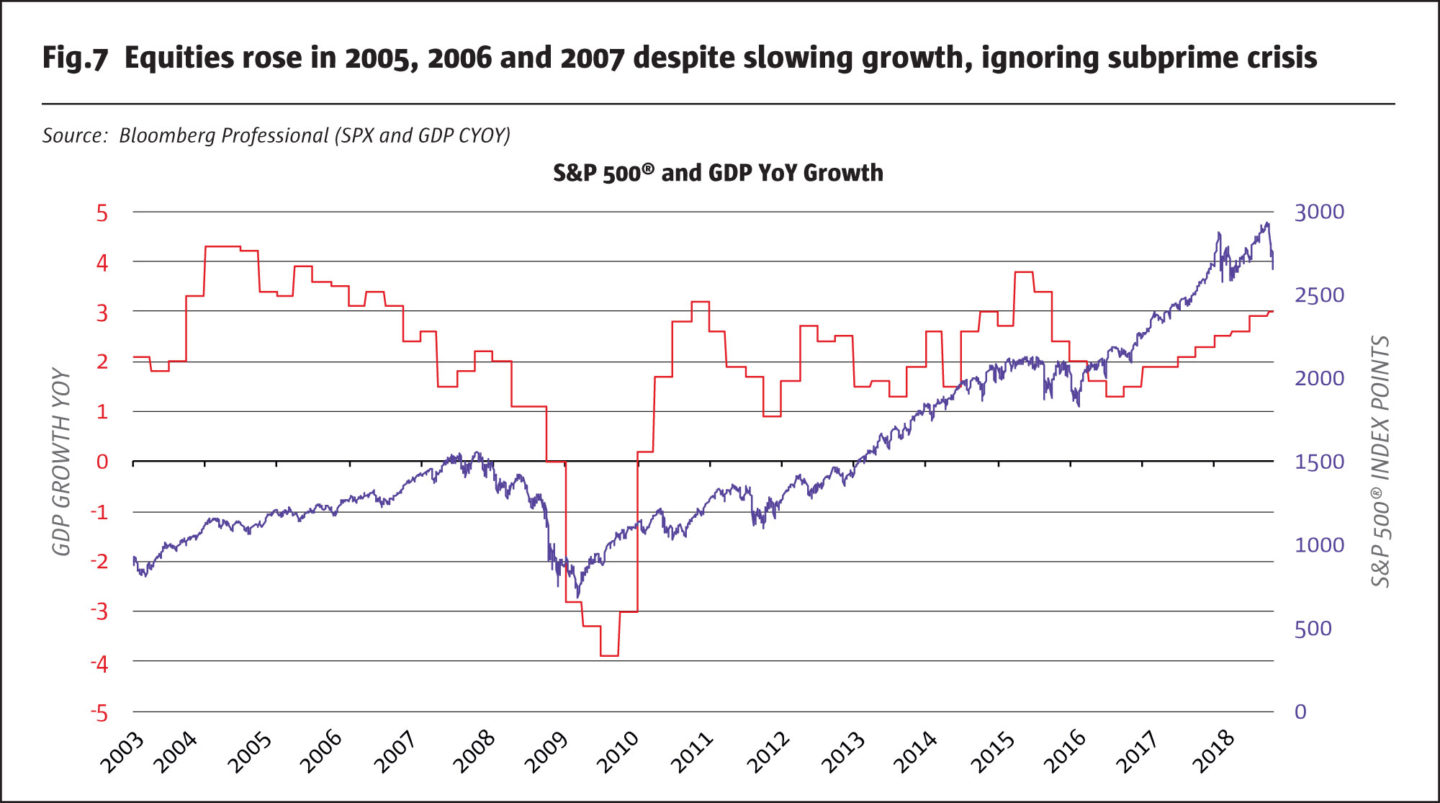