Founded in 2004, San Francisco-based DCI was one of the first firms to run a market neutral credit strategy, which launched in 2007. The firm’s unique systematic investment process, including fundamental, quantitative and statistical elements, dates back to groundbreaking academic research in the 1960s. Multiple innovations have been honed and refined over time but the one constant at DCI has been a focus on idiosyncratic alpha, which distinguishes the company from many peers.

DCI CEO, Tim Kasta, asserts that, “most long/short credit strategies are taking some kind of beta risk; or basis risk such as cash versus CDS; or are looking to pick up illiquidity premia; or they may be taking factor risks, such as small cap, value, growth or momentum. Our return stream is not correlated to any of the beta benchmarks, nor to factors, nor to other managers”. 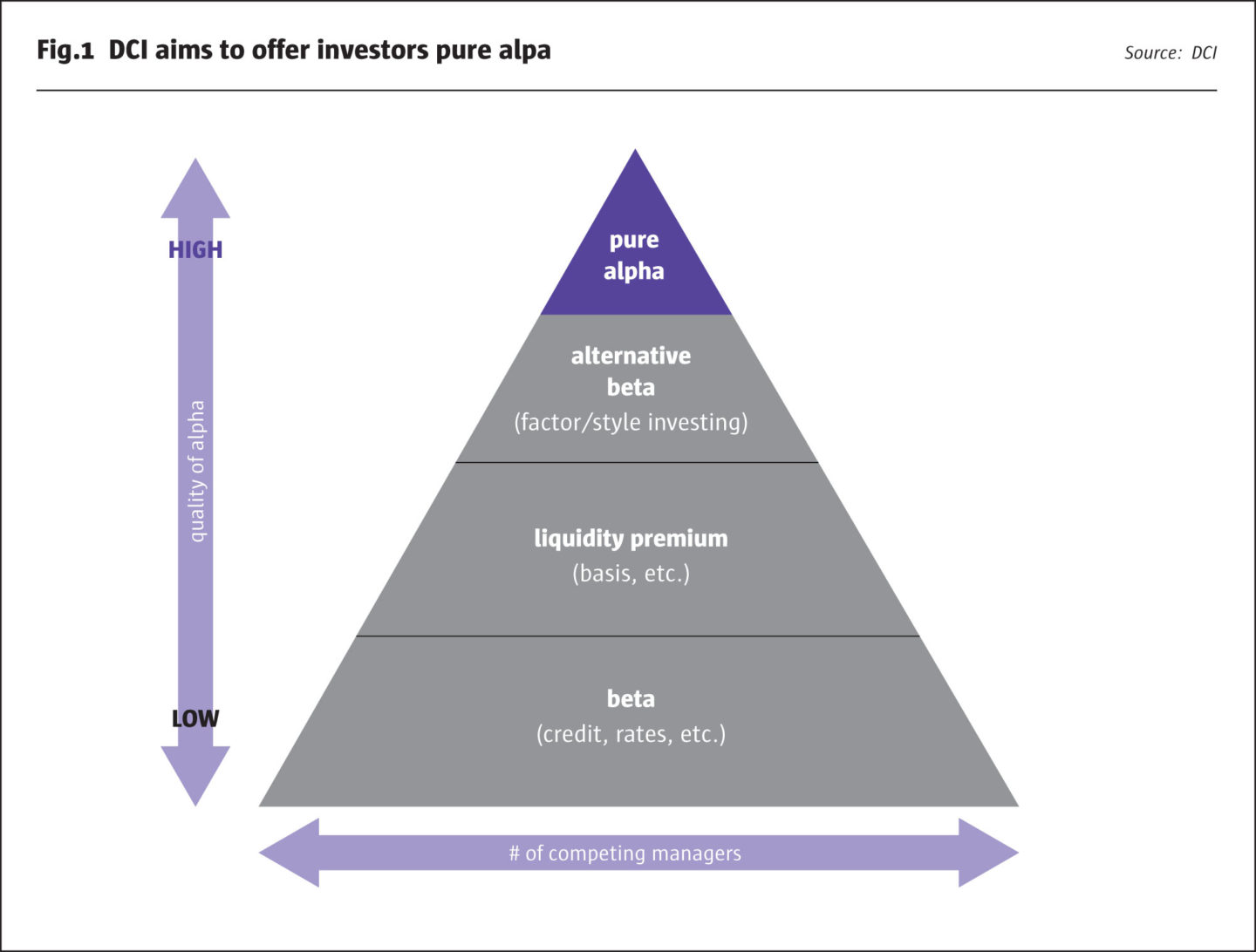 The source of investment returns can be characterised as a pyramid, with beta at the base; liquidity premia at the next level; alternative beta/risk premia/style premia further up, and true alpha at the pinnacle. DCI’s strategy aims to be a purveyor of pure alpha – and moreover to extract it mainly from idiosyncratic single corporate security selection.

Performance attribution analysis (using the back-test of the latest models between April 2006 and June 2016) bears this out: of gross average annual returns of 15.8% since 2006, 10.8% came from single name selection and sector exposures made up most of the rest at 4.3%. “While the strategy is run with various constraints including sector constraints, the strategy is not completely sector neutral because analysis has shown that companies in the same sector will often move in clusters,” says Kasta. There have been consistently near zero, and sometimes slightly negative, correlations to conventional asset classes such as equities, credit, and bonds – and no meaningful correlation to factors such as quality, value, size and momentum.

“The main factor risk is a plus, namely that higher volatility environments typically lead to more mispricing in corporate credit CDS,” he continues.

At first sight, DCI’s UCITS strategy seems simple: the long and short books both trade single name corporate CDS, and both are expected to be profit centres; the short book is not a hedge for the long book, though it is constructed so that the systematic risks of the long and short portfolios offset. The core concept is valuation convergence, which decades of research and pratical experience at DCI suggests that credit spreads of cheaply priced names will narrow while those of richly priced names will widen. But the devil is always in the detail.

Proprietary cleaning of accounting data is needed in a process that has now been almost completely automated (a human eye still checks for the latest adjustments to capital structures or other corporate events). Information gleaned from public equities and derivative markets, and numerous other inputs, help DCI infer default probabilities and thereby fair value credit spreads, using a proprietary, structural default probability and credit valuation model on which the co-founders have been innovating for over three decades.

Our insight was to find volatility in individual names even when aggregate volatility was extremely low.

DCI’s alpha forecasts also incorporate information gleaned from the ongoing dynamics of a firm’s underlying credit quality. This refined approach – which has been employed in its current iteration since mid-2016 – has helped the strategy to perform better in lower volatility climates and is now applied across all strategies at DCI: investment grade credit including long duration/LDI; high yield credit; absolute return credit and long/short credit.

The current CDS investment universe for the DCI Market Neutral Credit UCITS Fund is filtered down to 300-400 unique entities, but excluding private issuers and allowing only the most liquid CDS contracts to be traded. The contracts are cleared at ICE (thereby mitigating counterparty risk). In this context, the CDS spreads traded are viewed as being as close as possible to pure credit risk premia (rather than illiquidity or other valuation premia).

The CDS reference entities traded in the strategy are all based in developed markets, with typically 70-75% in North America and the balance in Europe. Roughly half of the percolated subset is traded at any time, with the long and short books each typically containing about 80 names. “This is enough to diversify the idiosyncratic risk,” says Kasta. “The long and short books are credit beta-matched, and also happen to have broadly comparable credit rating, term, geographic, and sector profiles.”

Average individual position sizes average around 1% – 1.5% notional, with position sizing in proportion to expected return in what is dubbed “maximum convergence”. Trading is subject to the constraint that forecast alpha must cover transaction costs.

Though wagers on individual names are scaled according to their perceived potential, the overall strategy does not time its opportunity set. “The strategy runs near its maximum leverage of 600% gross exposure at all times, and does not attempt to predict or time regimes,” declares Kasta. A scatterplot shows how weekly returns have risen in more volatile climates, but the strategy has still been able to generate some reasonable returns in calmer markets. 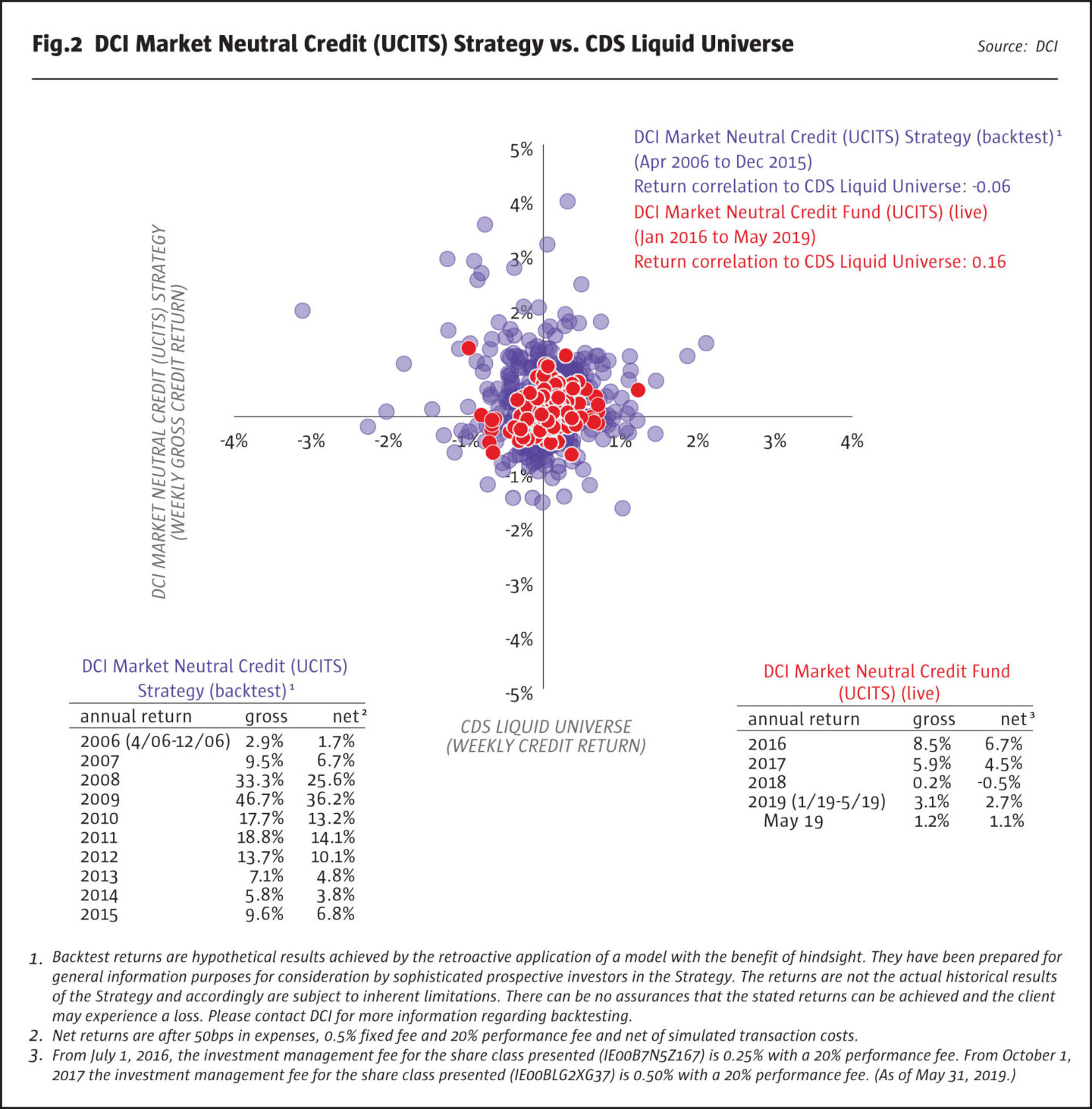 The best environment, based on back-testing, was 2008-2009, which threw up substantial dispersion in credit markets. Then 2010 and 2011 were middling for the opportunity set. With the lowest equity VIX on record, 2017 might have been a poor environment for the strategy but there was in fact a reasonable level of idiosyncratic volatility in credit markets. “Our insight was to find volatility in individual names even when aggregate volatility was extremely low,” says Kasta.

DCI’s approach of targeting essentially constant leverage contrasts with the many systematic and quantitative funds that target constant strategy volatility, and means that the opportunity set governs the quantum of the strategy’s volatility and returns. Recently, both have been in single digits, but they could well surge into double digits in a more volatile climate, judging by the back-test.

In terms of fundamental market drivers, “20 years of data, and 15 years of experience at DCI, shows the strategy works well during the three quarters of the time when default probabilities actually matter, and when there is a normal relationship between equity and credit,” comments Kasta. Roughly one quarter of the time, when default risks are less important and credit fundamentals are not driving credit spreads, the strategy performance is expected to be lower. Such episodes can occur in bull or bear markets: they can take the form of a junk/relief rally that lifts all boats, an illiquidity rally, or indiscriminate spread widening during a risk off phase such as July 2007 or December 2008. Alpha can also be constrained at times when perceived capital structure risk is disproportionately stalking the credit markets. “It is hard to predict these episodes, and they are not long lasting, so we just ride them out. Since the strategy is market neutral, these periods when alpha convergence is lower are not expected to result in any meaningful drawdowns,” he continues.

Though the past two years have not been the best environment for the strategy, it has delivered positive returns, outperformed peers, and received The Hedge Fund Journal’s “UCITS Hedge” award for best performing market neutral corporate credit fund, two years in a row.

Kasta notes that since the DCI Market Neutral Credit UCITS Fund is employed fully in CDS contracts, the Fund’s cash sits entirely in short-term US Treasuries. At current levels of USD interest rates, the treasury return more than covers fixed management fees and expenses, including clearing costs, on the USD and GBP classes. For the EUR and CHF share classes, where local interest rates are negative, the Fund is still expected to generate significantly positive returns even after the share class currency hedges.

The market neutral credit strategy can be accessed through a variety of fund structures. DCI has managed long/short strategies in UCITS format since July 2010 (and had a spell on the GAM platform before bringing the strategy back in house). Kasta is confident that the liquidity of the underlying portfolio is aligned with the five day notice period for daily dealing of the UCITS fund: “the breadth of the liquid single name CDS market has not come down since volumes began being reported since 2010, and there have been some new entrants such as Wells Fargo making markets in CDS,” he says. Even so, this is not an entirely frictionless market and the UCITS does have entry and exit charges so that subscribers and redeemers, rather than other shareholders, bear the transaction costs associated with their inflows and outflows. An “anti-dilution levy” of 0.50% is paid to the fund, to approximately reflect the weighted average bid/offer spread on the underlying leveraged portfolio.

DCI originally ran the market neutral strategy in managed accounts that used more leverage than the UCITS. An Irish AIF launched in 2017 also has higher gross exposure, as well as potential to run a more concentrated book, free from the UCITS diversification constraints. The AIF, which requires 30 days’ notice for monthly dealing, targets returns (10-15%) and expected volatility (4-7%) about 50% higher than the UCITS through a full market cycle; as with the UCITS, these ebb and flow with more and less conducive climates.

The CDS bucket of the AIF matches the UCITS portfolio in terms of names (though position sizes may differ), but the AIF can additionally trade physical bonds on both the long and short sides. This introduces another element of diversification: the physical strategy is quite lowly correlated to the synthetic one, partly because the universes of names have different credit profiles: whereas about two-thirds of the CDS portfolio is investment grade, around two thirds of the cash bond portfolio is high yield.

DCI may add emerging markets (EM) corporate credit to the AIF, and is separately seeking seeding for a long-only EM corporate bond strategy.

DCI also applies its alpha engines and portfolio construction approach to its long only credit strategies, where the shared goal is to add alpha through name selection rather than timing market or interest rate cycles as credit and rate betas are matched to their respective benchmarks. These strategies have been important drivers of asset growth: firm AUM have nearly doubled from $3.2 billion in 2016 to $5.6 billion in 2019 as of May, 2019.

DCI’s analytics has its roots in the seminal 1960s research behind the KMV credit pricing model that was in 2002 sold to ratings agency Moodys: the K in the KMV, Stephen Kealhofer, DCI co-founder, remains as Head of Research at DCI. Research continues to evolve. “Research on forecasting defaults and valuation models for fair value spreads is constantly being refined with new risk models and bond analytics for credit term structures. We have also added a handful of accomplished researchers to work on more innovative projects, developing and enhancing alpha sources. This will include deep dive analysis of the interaction between equity and credit markets; further modelling of market microstructure, transaction costs and liquidity; and research into inventories and new issuance. The core model is also being adapted so that it can apply to a wider universe of credits and therefore increase the scalability of the strategy,” says Kasta.