Europe appears to be on the verge of a political meltdown. German Chancellor Angela Merkel’s coalition government nearly collapsed in the first week of July. Italy is governed by a populist left-right coalition that promises tax cuts and spending increases to the displeasure of bond investors. Spain recently changed the governing coalition without even holding a new election. In Britain, Prime Minister Theresa May has reached several important Brexit agreements by herself but seems unable to win over the backing of her own cabinet much less the Parliament or the European Union. Britain looks like its heading towards a ‘hard’ Brexit – or maybe no Brexit at all.

Despite these concerns and global trade tensions, currency options markets are hardly perturbed. Options volatility is trading at near record lows for all six major currencies versus the U.S. dollar (USD) (Figures 1, 2 and 3). 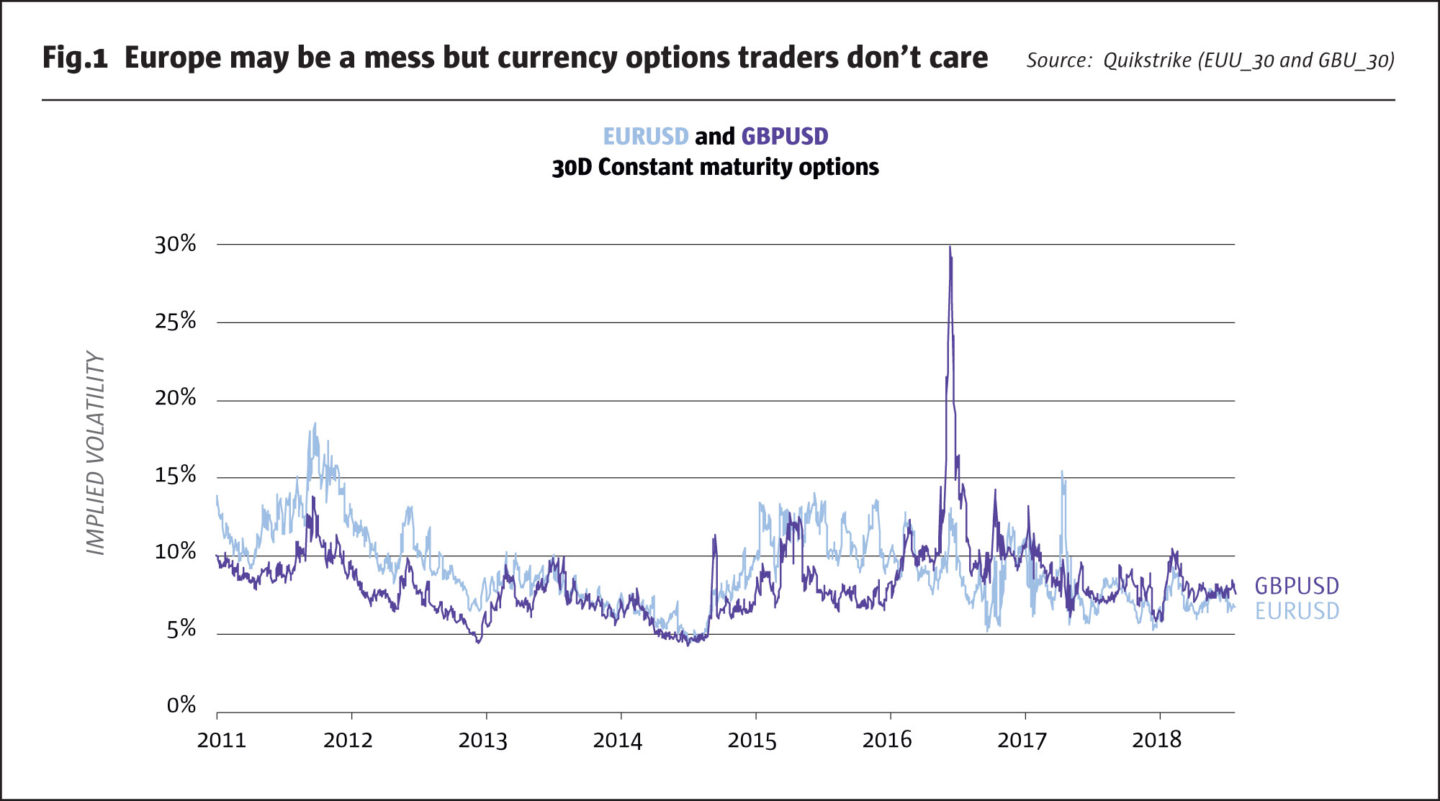 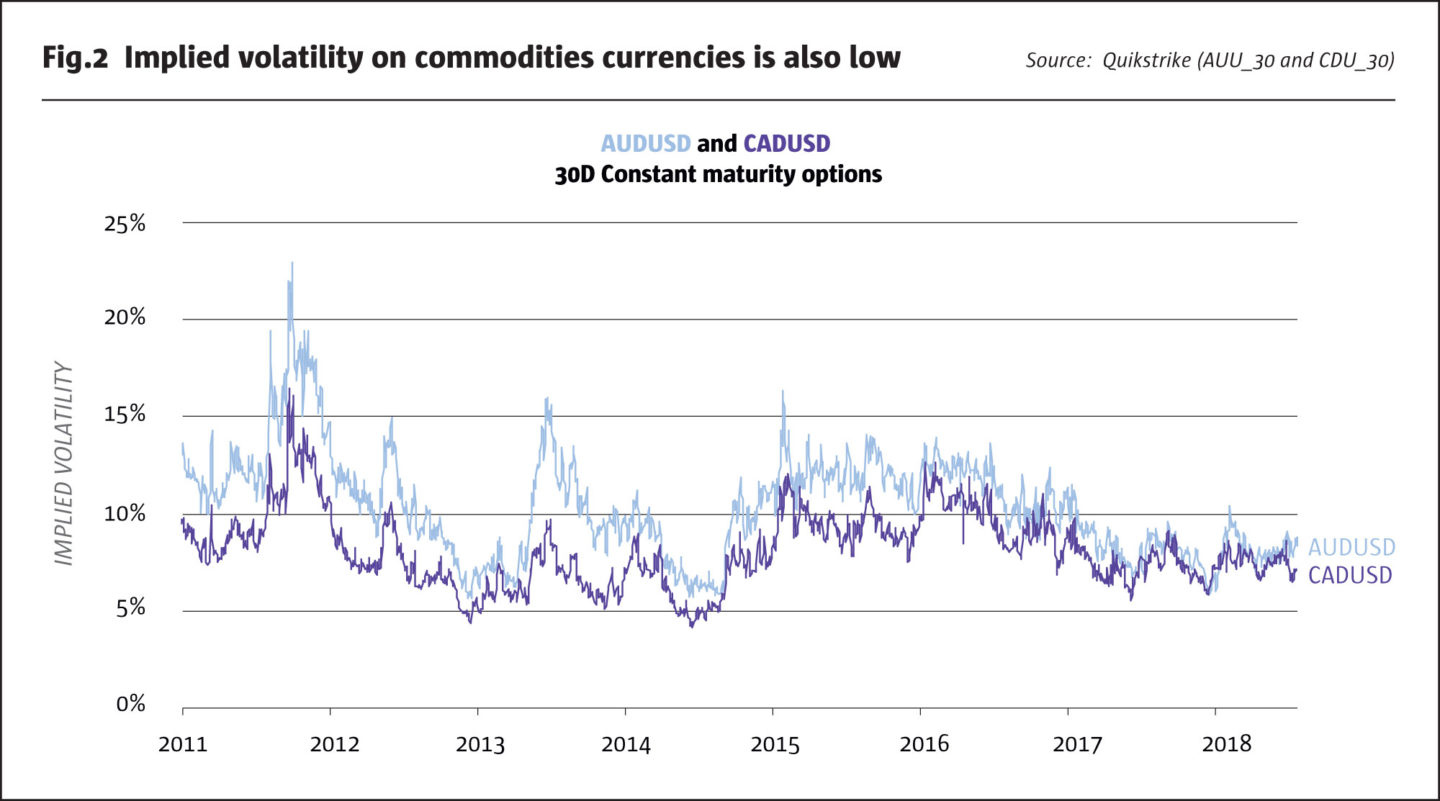 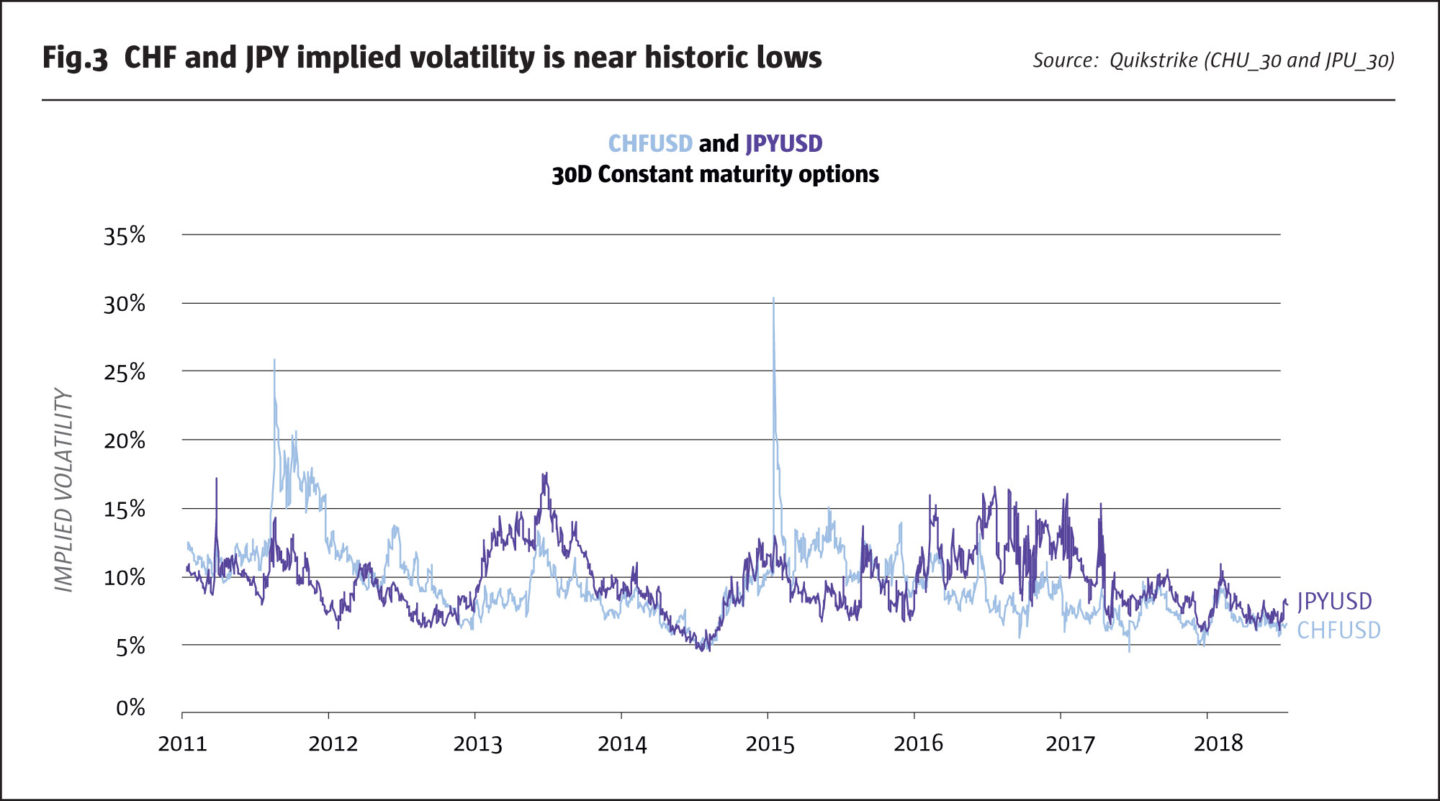 Low realized volatility is a large part of the reason why options on currencies are so cheap. It’s expensive to be long options in markets where prices are moving relatively slowly. That said, several emerging market currencies have seen their prices collapse relatively quickly and their more extreme moves could be a harbinger of volatility among the major reserve currencies. Specifically, the Argentine peso and the Turkish lira have collapsed, while the Brazilian real and the Russian ruble have experienced substantial downside moves. Recently, the renminbi has begun to slide as well (Figure 4), as have the Colombian peso and Indian rupee. These tremors may be signaling an earthquake to come. 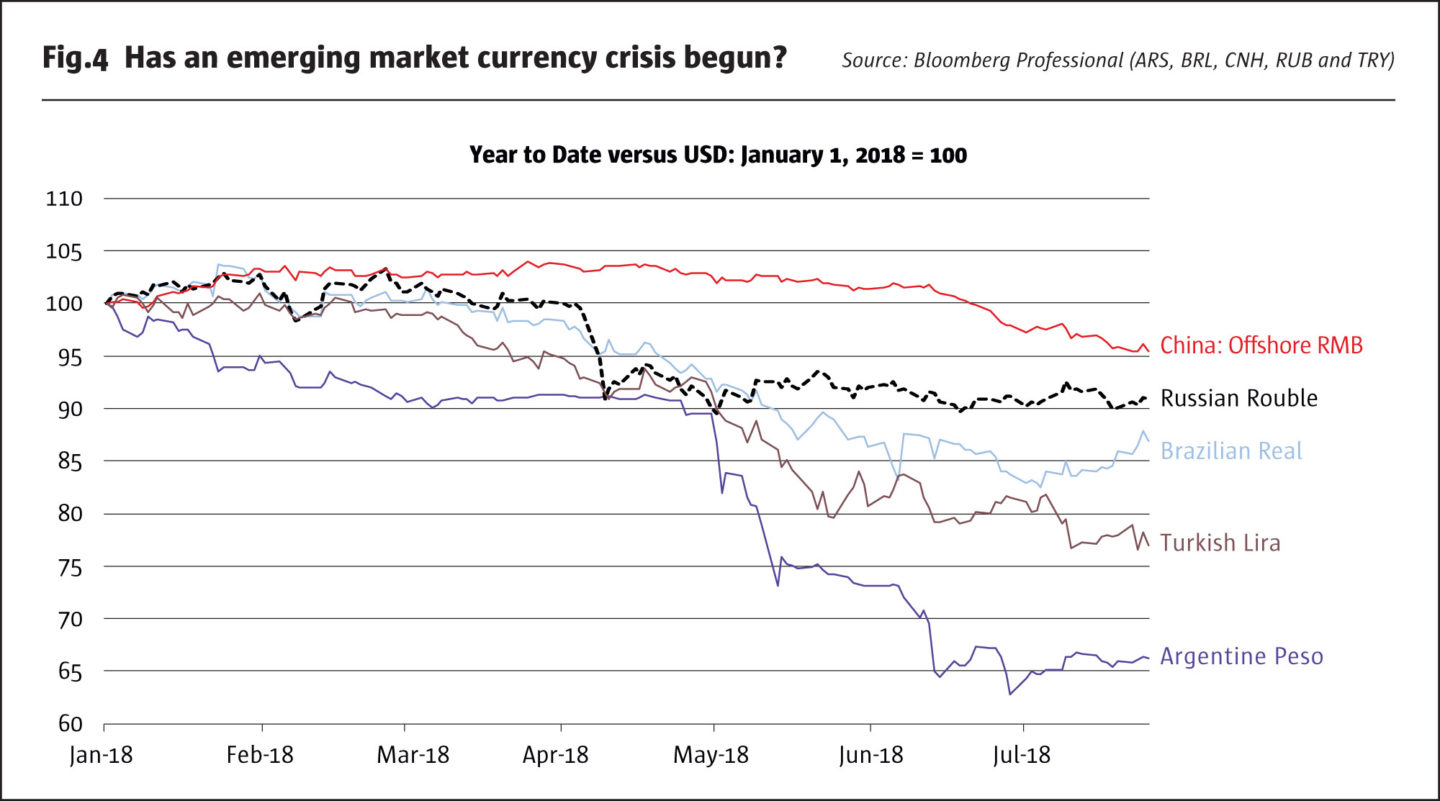 Perhaps. But the currency options market doesn’t appear to be too worried and it’s not alone. Implied volatility is at or near record lows for options on many other assets, including precious metals, bonds and equity index futures (Figures 5-7). What’s more is that currency options appear to be following the same cyclical pattern that we have observed in Treasury bond, equity index and precious metals options markets as well as for credit spreads and unemployment. 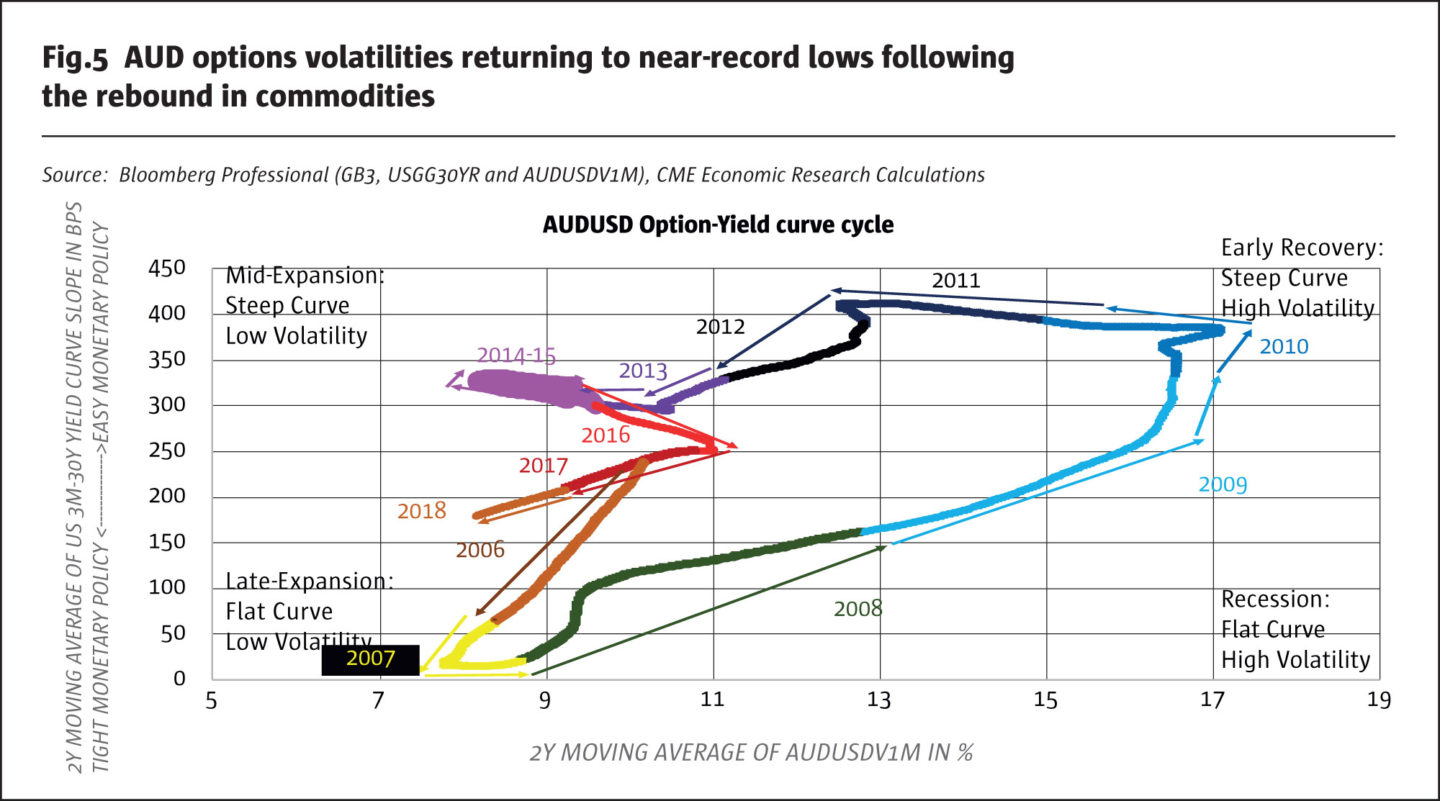 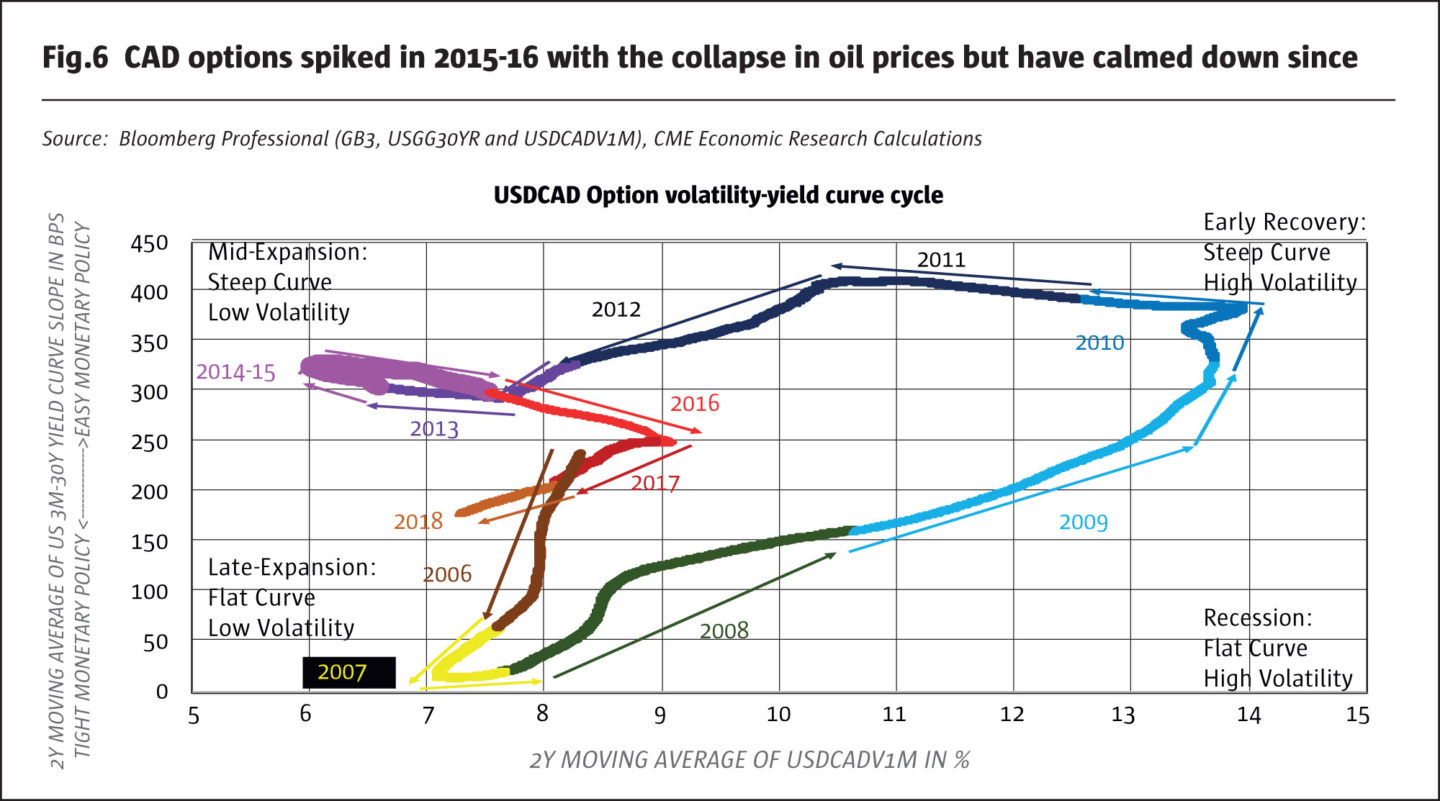 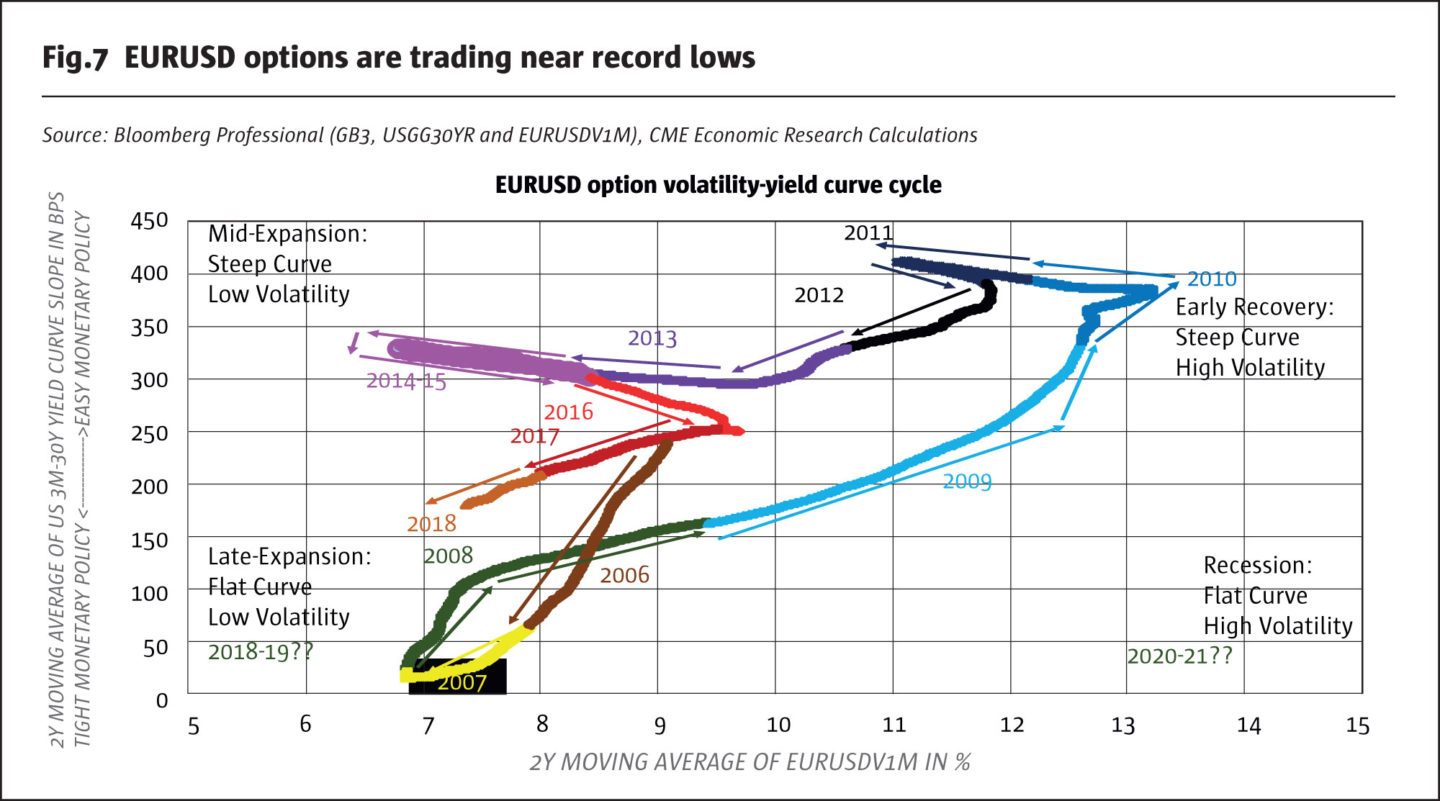 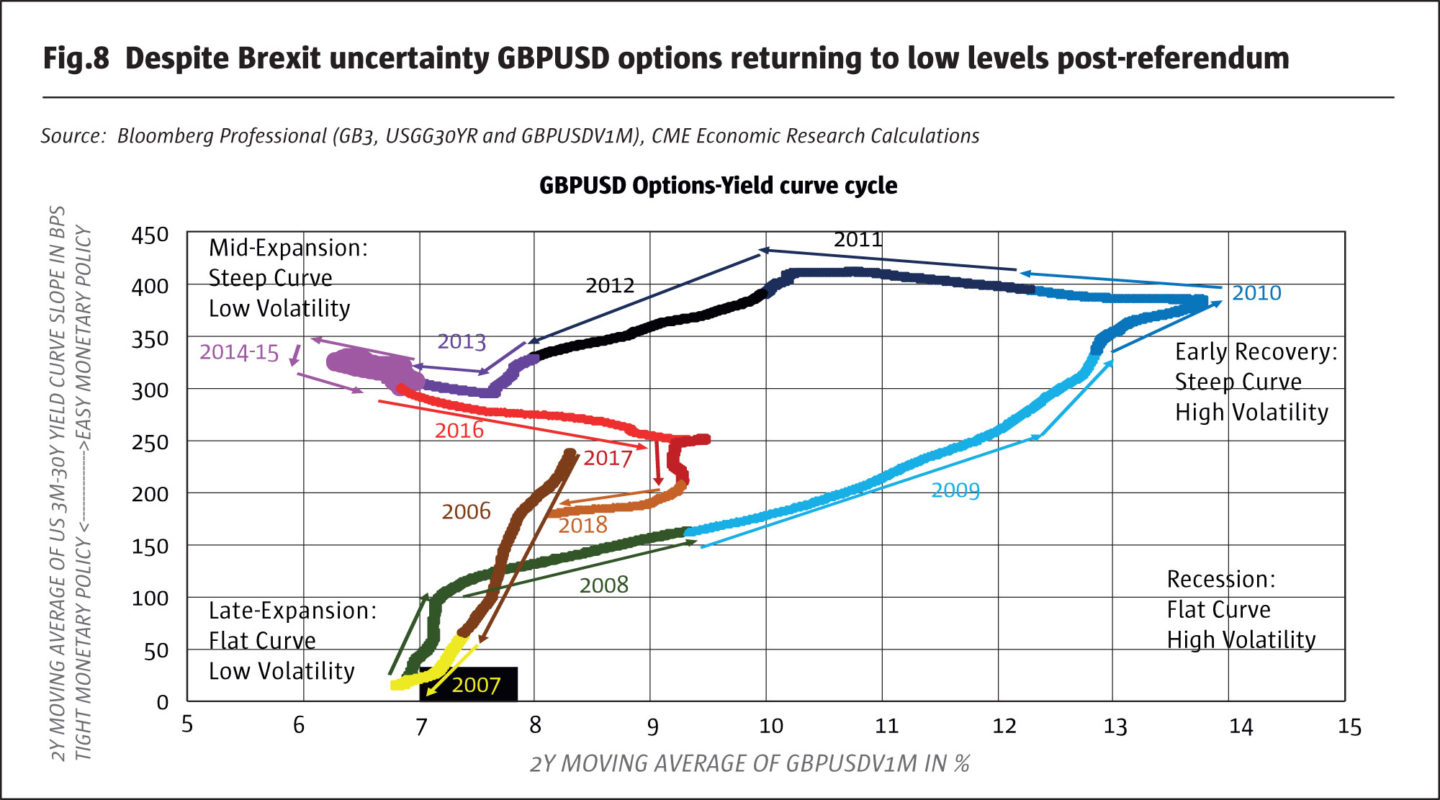 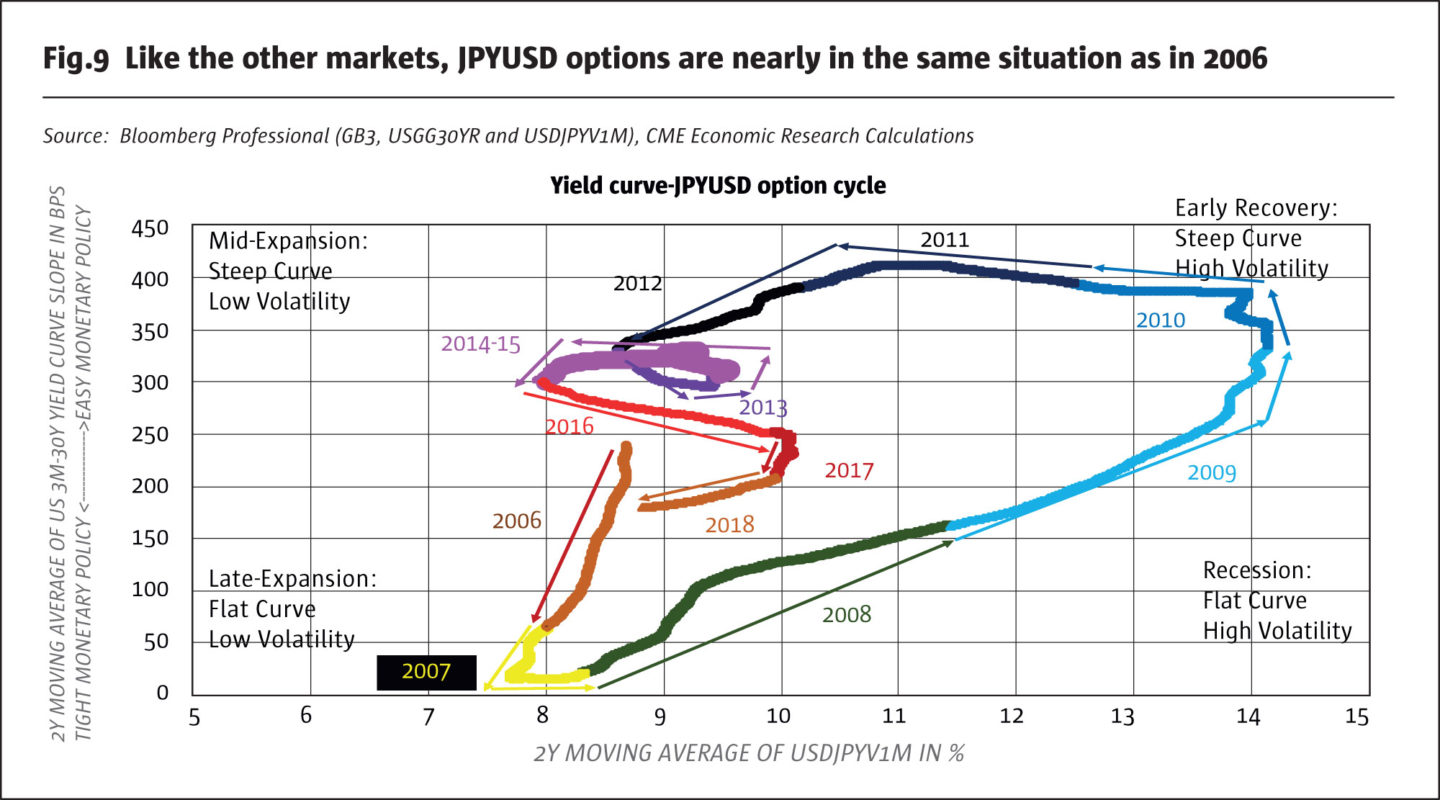 1) Recession: flat yield curve, high implied volatility and wide credit spreads are observed as the economy slips into a recession. This forces the central bank to slash rates and steepen the curve, moving towards the early stages of a recovery.

4) Late-stage recovery: towards the end of an economic expansion the Federal Reserve has hiked rates, the yield curve is flat and volatility is low but is on its way to exploding. When it begins to rise, the move can be both sudden and powerful. Credit spreads also widen and unemployment hits bottom and begins to rise.

Currently, every set of options markets that we track indicates that we are moving from the mid-stage to the late-stage economic recovery. Implied volatility is low, credit spreads are narrow, unemployment is low and may fall further. By the same token, the Fed is deep into a period of interest rate tightening, with seven rate hikes and the beginning of a balance sheet reduction under its belt. Moreover, the Fed has suggested that it intends to hike rates at least once and probably twice in in the second half of 2018, followed by up to three in 2019 and two more in 2020. Even if some of the seven suggested future rate hikes never see the light of day, it is plausible that by the end of 2018 or early 2019 the yield curve will be completely flat if the Fed continues to hike at anything akin to the pace set forth in its “dot plot.”

Even if the yield curve does go to flat, it does not imply that we will see a short-term eruption in implied volatility on FX options or in other options markets. In 1996 and in late 2006/early 2007, yield curves were flat, and markets were mostly calm with only occasional, minor spikes in volatility. That said, as the Fed continues to hike rates, it has lit a fuse that could one day, perhaps in 2019 or more likely in 2020 or 2021, set off a major eruption in financial market volatility with soaring option implied volatility, wider credit spreads and a sharp rise in the unemployment rate.

One could make a “this time it’s different” argument in that the Fed is largely alone in tightening policy. The Bank of Japan (BoJ) and the European Central Bank (ECB) are nowhere even close to raising rates. The Bank of England (BoE) has put rates back to 0.5%, where they spent most of the post-2009 period, reversing a temporary post-Brexit referendum cut to 0.25%. The BoE might raise rates to 0.75% this summer but, in any case, its path towards policy tightening will be a slow one. Only the Bank of Canada (BoC) is following the Fed’s lead and raising rates in earnest. BoC has its yield curve nearly flat, which is a concern given Canada’s high debt levels and possible real estate bubble.

Will the fact that other central banks are maintaining easy monetary policy allow markets to stay calm for longer than they might otherwise? We wouldn’t count on it. According to the Bank of International Settlements (BIS) around 60-65% of foreign currency reserves are still held in USD. A similar share of international trade is also priced in USD. The dollar remains the global reserve currency and the main unit of account for international transactions. Moreover, during the period of low U.S. interest rates, a myriad of carry trades were financed by borrowing, virtually interest-free, in USD and lending to higher interest rate areas of the globe. Now, with the Fed tightening, those carry trades are going pear-shaped and could eventually lead to a widespread emerging market currency crash with profound implications for commodity prices, equity and bond markets.

Since 2006, the cycles in FX options volatility have closely mirrored those in other products. The Australian dollar (AUD), Canadian dollar (CAD), euro (EUR), British pound (GBP) and the Japanese yen (JPY) have followed more-or-less the same cyclical pattern observed in other assets (Figures 5-9). They did experience a bigger rise in volatility during the 2015 and 2016 commodity price crash. GBPUSD also saw a temporary increase around the time of the Brexit referendum in June 2016. Even so, there are two points to note:

1) Implied volatility has since come down to near record lows

One could also make an argument that FX options could see a volatility explosion sooner rather than later. Not only does enormous uncertainty exist with respect to the course of Brexit and the stability of the European Union, things are also brewing in Asia.

Choked by debt, China’s economy also appears to be slowing. The Peoples Bank of China (PBoC) and the Chinese government are taking steps to stabilize growth. The PBoC has lowered its reserve requirement ratio to spur lending, while the government plans to cut taxes in September. If China’s government is unable to contain the slowdown, it is likely that commodity prices will crash again. Already, copper prices are falling sharply and iron ore is sinking. The combination of a commodity-price collapse, like the one in 2015-16, plus the usual volatility eruption that occurs when the Fed over tightens, could produce an enormous rise in FX option volatility later in this decade or early in the next. This could be explosive for FX volatility, especially for AUD and CAD, which exhibit a strong correlation to the Li Keqiang alternative measure of Chinese GDP (Figures 10-13). 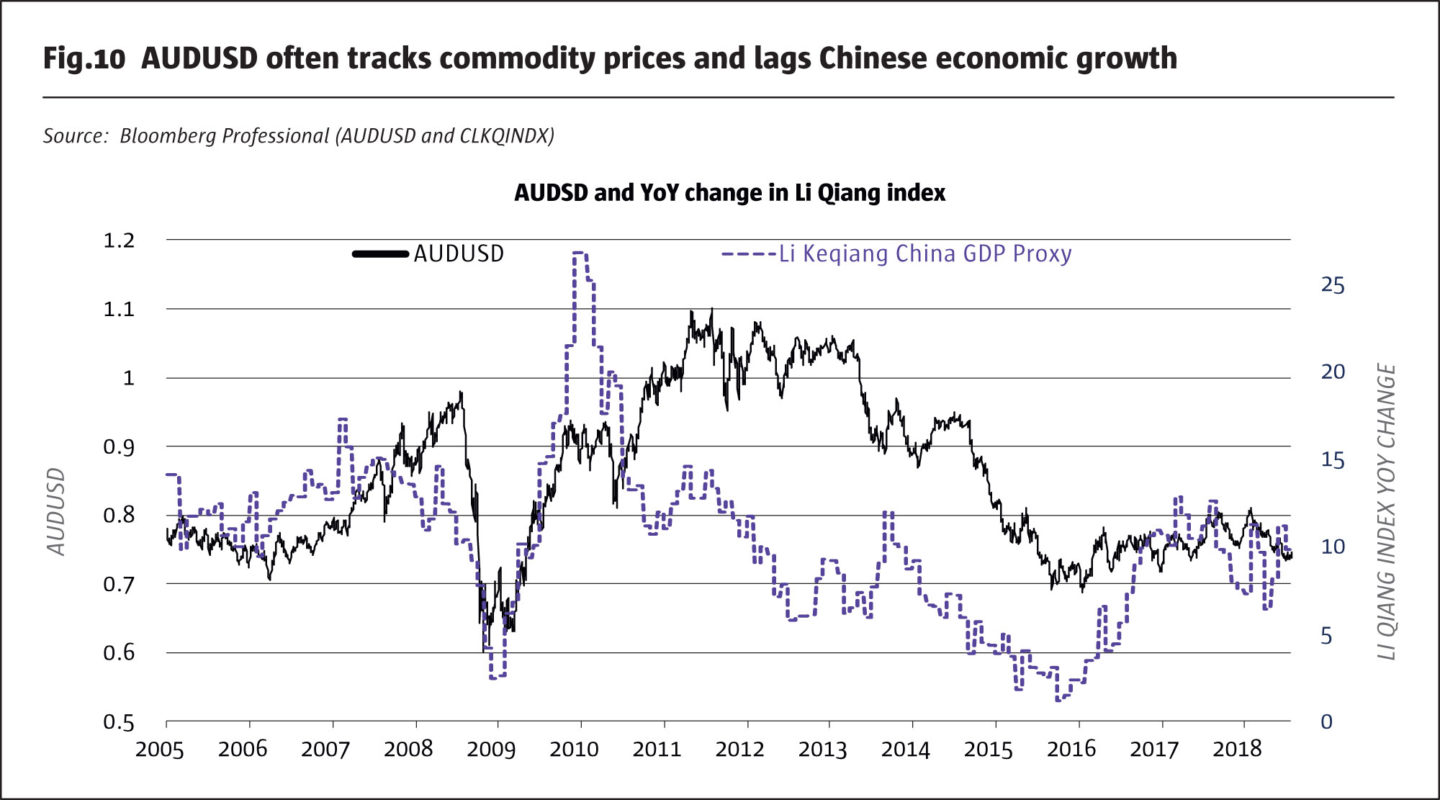 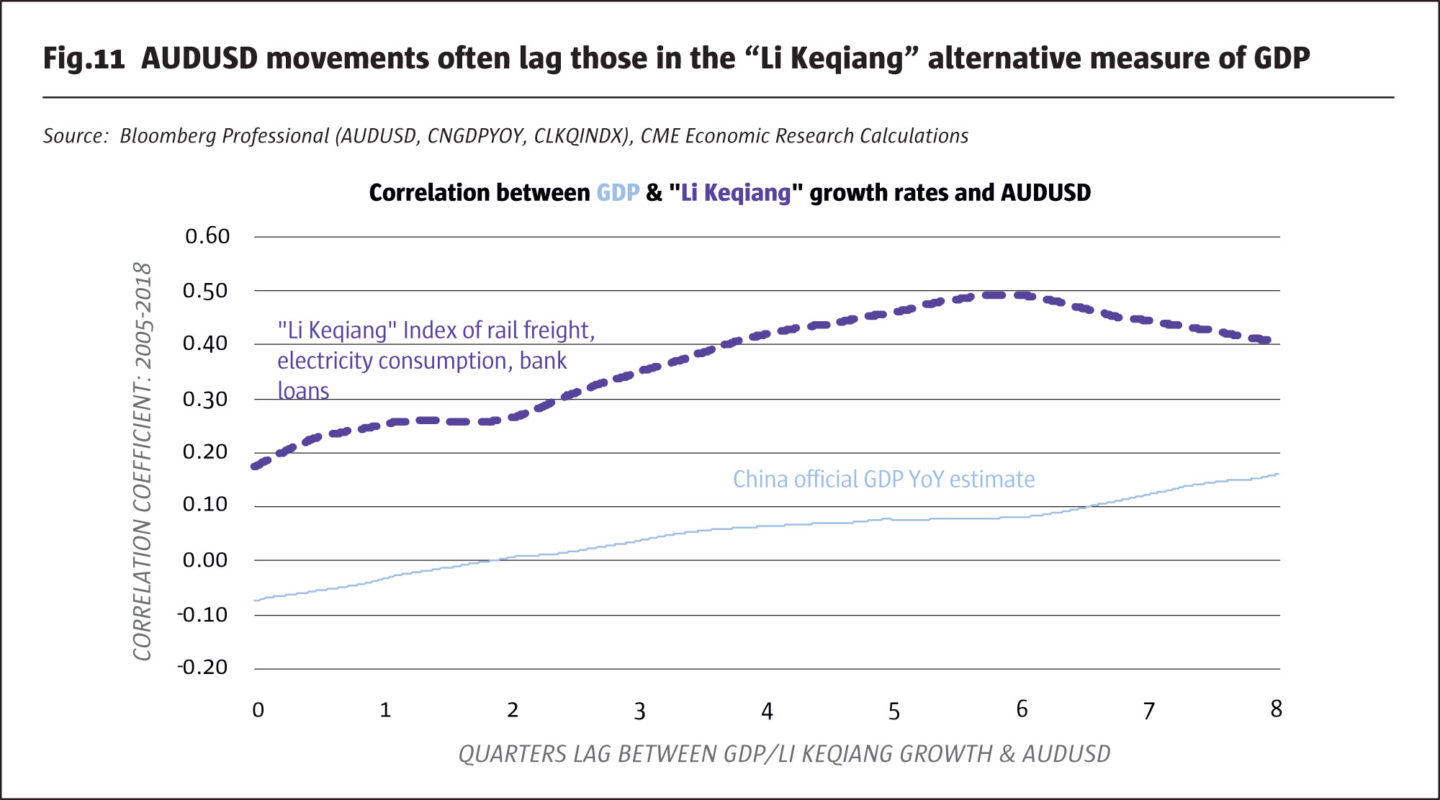 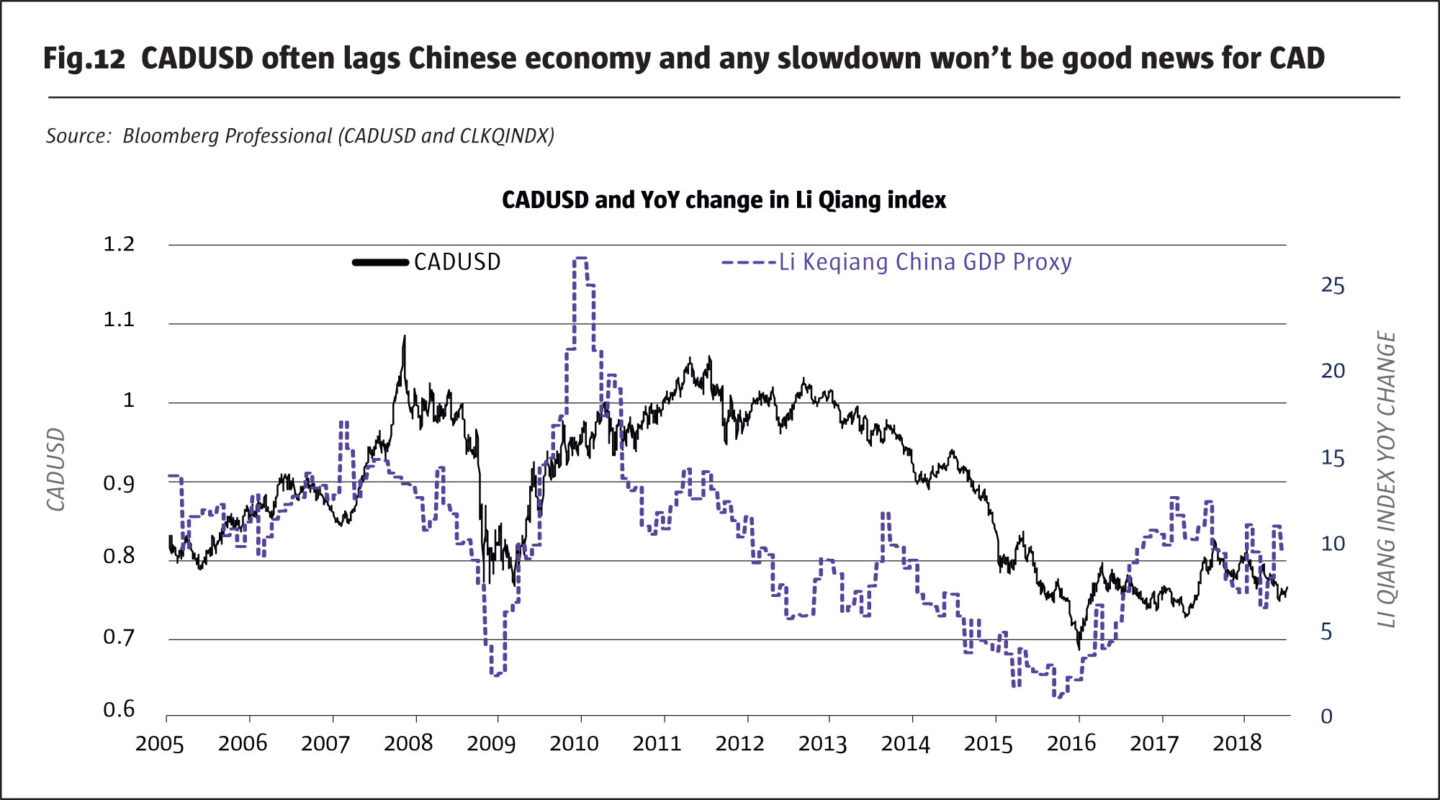