Breaking out of the doldrums

Originally published in the April | May 2017 issue 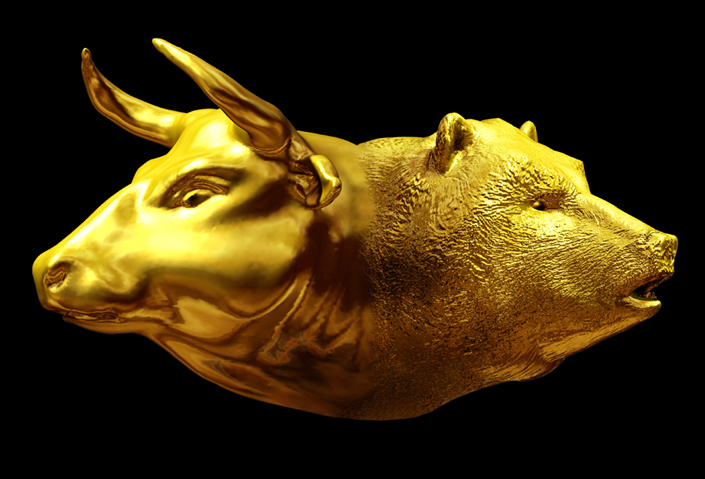 In the one-and-a-half months after the US elections on November 8, gold prices plunged 12% on the assumption that the incoming president’s fiscal stimulus would boost the economy and lead to higher interest rates. However, with the Trump agenda running into numerous roadblocks since then, the yellow metal has rebounded, recouping nearly all its post-election losses. Gold options, meanwhile, have perked up from their recent lows, but with implied volatility at less than 14% they remain historically inexpensive (Fig.1).

Going forward, there are possibilities of big moves to the upside and downside that could reawaken the sleepy options market and lead gold options to significantly higher levels of implied volatility. Although many factors influence gold prices, we see two elements playing a dominant role:

1. Expectations for changes in US monetary policy.
2. Changes in gold mining output.

These two factors exert their influence in very different ways. The first is demand-based and moves gold prices on a day-to-day basis. The second is a supply-based influence that appears to move gold prices on a year-to-year basis. Both factors have the potential to create strong trends in gold prices and impact the implied volatility of gold options.

US monetary policy and gold prices
That US monetary policy would impact gold prices is in some ways counterintuitive. The United States is a relatively inconsequential consumer of gold jewelry. Americans only consumed about 3% of the gold jewelry sold worldwide in 2016. This pales in comparison to the quantities sold in China and India, which totaled 33% and 25% of 2016 global sales, respectively. Europeans, too, love gold jewelry more than Americans, accounting for about 15% of global sales in 2016.

The reason why gold prices are so strongly influenced by US monetary policy is relatively simple: gold is priced in US dollars. Any action that the Federal Reserve (Fed) takes to weaken the US dollar by lowering interest rates or expanding quantitative easing tends to weaken the fiat currency of the United States to the benefit of holders of gold. By contrast, any action the Fed takes to make the ownership of US dollars more attractive, such as curtailing quantitative easing or raising interest rates, tends to send gold prices lower.

This is seen in the strong, negative correlation between day-to-day changes in the spot price of gold and day-to-day changes in the interest rate on Fed Funds Futures (100 minus Fed Funds Futures contract price). If expectations for the Fed to tighten policy increase, gold prices tend to move lower and vice versa. Moreover, gold is much more negatively sensitive to changes in US interest rate expectations than are other precious metals such as silver, platinum and palladium (Fig.2).

Following the US elections, expectations for higher interest rates soared, to the detriment of gold. Since late December 2016, however, expectations for Fed rate hikes have moderated as the Trump agenda hit a series of snags (Fig.3). Essentially, Trump has not been able to get any of his domestic agenda through Congress thus far. Healthcare reform flopped. Tax reform is still on the table. While the Administration has said it will release a tax plan soon, it’s not clear if it will make it through Congress. The Administration continues to advocate increased infrastructure spending but no detailed plan has been put forth and it’s not clear how Congress might react when such a plan materializes.

As such, gold is the ultimate hedge for setbacks in the Trump agenda. If the administration fails to get its plans enacted, gold prices will likely move higher. If the Administration succeeds, gold prices could retest or break their December lows. Although Trump’s presidency appears to be off to a rocky start, don’t count him out: many past Administrations took months or years to accomplish their main objectives.

The bad news for gold is that, for the moment, the Fed seems determined to hike rates further. Fed Chair Janet Yellen and her colleagues have told investors to expect at least one or two more rate moves in 2017 in addition to the one in March. The labor market remains tight, with unemployment down at 4.5% giving the Fed the justification to raise rates further.

The problem for US monetary hawks, and the good news for owners of gold, is that inflationary pressures still aren’t apparent. Headline Consumer Price Index (CPI) is up 2.4% year on year but might be cresting, while core CPI is up 2.0% year on year. Oil prices hit bottom in February 2016 and by June were back to current levels of around $50 per barrel. This will tend to lower the year-on-year rate of headline CPI inflation as Q2 and Q3 inflation data begin to roll out. Moreover, despite the tightening labor markets, wage growth remains modest and there is not yet much evidence of sustained upward pressure on core CPI.

Beyond the intermediate-term issues of labor markets and inflation, there is one major long-term reason to think that the Fed can’t raise rates too aggressively without hurting the US economy: US debt levels remain astronomical. Since the 2008 crisis, there has been no deleveraging. Or more specifically, a modest post-crisis private sector deleveraging has been more than compensated for by a massive levering up in the public sector. Total US debt remains above 250% of GDP (Fig.4). This explains better than any other factor why the Fed Funds target rate is still below 1% despite an unemployment rate of 4.5%. When unemployment was at similar levels in 2007, Fed Funds futures were at 5.25%. If the Fed put rates at that level now, it would risk recreating the 1930s Depression.

Still, one could imagine a scenario where a deregulation of the financial sector could create another upward spiral of private sector debt. If this happens, the Fed might have to raise rates further than it otherwise would, but at the risk of triggering a crisis. This would be bad for gold until the crisis materializes and then it would likely be very bullish. Assuming that this doesn’t happen, the Fed’s current tightening cycle is likely to peter out with a Fed Funds target rate in the 2-3% range. In the short-term, this probably won’t be great news for gold but if the Fed inverts the yield curve, watch out for a recession and a subsequent easing cycle which should be bullish for the yellow metal.

The collapse in gold prices after 2011 did eventually slow the increase in mining output, which may have helped to stabilize prices in 2016. That said, mining output is still growing. It rose 1.4% in 2016 versus 2015. More importantly, mining gold remains profitable. At current prices, consultancy GFMS estimates in its 2017 Gold Survey that at $1,280 per ounce, 97% of the world’s mines are cash-flow positive and 94% of the world’s mines are profitable on an all-in sustaining basis. Moreover, with gold at $1,280 per ounce, the world’s mines are earning operating margins of around 50% — much better than a few years ago when the price had fallen to around $1,050 per ounce (Fig.6).

The fact that gold mining remains profitable does not guarantee that mining output will continue to rise. But it does provide a strong incentive for further investment that may result in rising mining output. If gold mining supply continues to rise, it could be quite bearish for the price of gold given other factors; it could augment the downside for gold if the Fed accelerates the pace of tightening, and dampen the upside if the Fed reverses course and eases monetary policy.

A downward break for gold would likely send options prices soaring. Most commodities and financial instruments experience higher implied volatility on the downside than on the upside. That said, a quick rise in gold prices, like the rally that peaked in September 2011, could also create a spike in options costs. Either way, we wouldn’t count on options prices remaining at or near their record lows given the potential for volatility going forward.