Originally published in the July 2017 issue 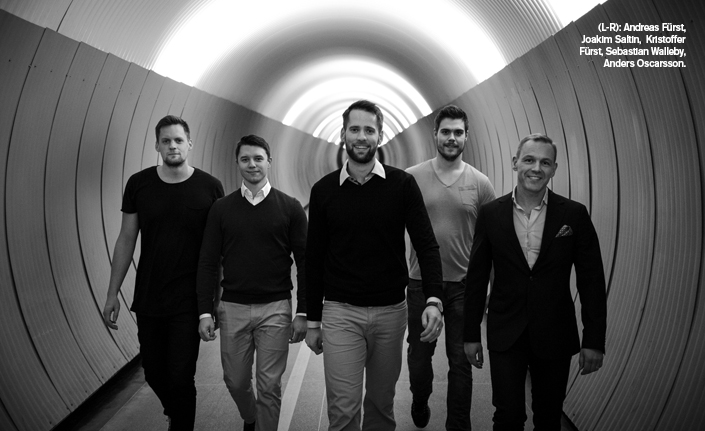 After years of consolidation within and between asset servicing and front to back office (F2B) technology, a new entrant might seem startling. But Limina co-founder and CEO, Kristoffer Fürst, is confident that their newly designed offering not only allows fund managers to reduce costs, but is also more functional in two main ways: user-friendliness and automation.

The passion for automating and improving processes that led to Limina was apparent in Fürst’s first job, trading derivatives for Handelsbanken, where he was shocked that so little automation existed for some trading processes. After broad risk, IT and quantitative experience across various investment strategies at Sweden’s largest hedge fund manager, Brummer & Partners (which belongs to The Hedge Fund Journal’s “Europe 50” ranking), project Limina, named after a village in Sicily, began to crystallize in Africa. Fürst met minds with Limina’s business development head, Jamie McLennon, in vanilla-scented Madagascar, where he was scuba-diving as a marine science officer for an NGO, having worked at Google and Goldman Sachs after studying artificial intelligence. “We found that we both came from a similar educational background in finance and programming,” recalls McLennon who continues “it was immediately clear that this was out of the ordinary; from the first day Kristoffer would sit on the beach coding instead of watching the sunset.”

Limina blossomed further in Kenya, where Fürst and his future wife were doing voluntary work teaching Maths, English and Business to women who had no secondary education. Erratic electricity supplies and 24-hour blackouts tested Fürst’s resourcefulness. But with two laptops, two extra backup batteries, and videoconferencing via a 3G internet connection, he built the first version of a cutting-edge system in six months.

Fürst invested many hours of “sweat equity” developing the nascent business with a small initial team which has now grown to a sizable 14, driving the early growth phase. All staff have notable achievements. For instance, Lead DevOps Engineer, Virgil Rochette, ran Orange’s telecom infrastructure with zero downtime demands. Financial software engineer, An Phung, won the Vietnamese National Olympics of programming twice, later studied in South Korea and worked on real time technologies in Japan before relocating to Limina’s Sweden HQ. Typically for a tech firm, four staff are remote: two in Vietnam’s Ho Chi Minh city, one in Bangladesh’s Dhaka and one in India’s Pune.

Integration and internet
At first sight, Limina’s proposition echoes those of multiple technology companies and service providers: a “one stop shop” is less expensive than six or more separate licenses. But Fürst argues there are intangible differences “we simply want to offer a pleasant client experience, something that is harder than it seems”.

Limina reckon license costs could often be cut by 40-50%, going up to as much as 90%. And as fragmented configurations of systems can consume more energy to integrate than operate, companies may reduce internal costs of ownership – and/or be able to redeploy staff towards more profitable activities. Furthermore, as some asset servicers offer the option of similar bundles of outsourced F2B services, the arithmetic could factor in lower cost fund administration.

But the primary inspiration for Limina was not cost cutting. “Limina’s USP is that it is really a technology company based on extremely demanding e-commerce clientele,” explains Fürst. “In e-commerce the demands on uptime, security, and fast response times are actually much higher”.

Fürst was spurred by widespread frustration – from his, the team’s, and their network’s own experience of multiple vendor packages – that many technology systems are outdated and not optimally designed for the modern and evolving technology ecosystem. “Administration and prime brokerage services generally work well I find. And many front, middle and back office systems, such as those for portfolio management, risk management and order management, may all excel at something but they are built for a world that is different from today’s world and are a real hassle to work with,” contends Fürst, who claims “the core of pre-millennium systems is built for a world not run on the internet, but we can make things a lot simpler now”.

Lego or spaghetti?
Limina has conceived a micro-service architecture to facilitate faster and more flexible evolution. “Most systems are like a monolithic spaghetti junction or a ball of rubber bands whereby if the rubber band in the middle is dried out you can’t replace it,” says Fürst.

Acknowledging their Nordic neighbours in Denmark, Limina is conceptually analogous to Lego. “We have already replaced and thrown away parts. The trick is to use small, replaceable pieces to stay nimble in the future as well. This could have avoided the traps whereby changing the API of one piece could affect the other nineteen,” Fürst says. Indeed, the pilot that Limina tested at global macro fund Canosa in 2015, has already been utterly superseded. “Not one single line of code in the pilot is in today’s system. We love to throw away and rebuild – if it’s not broken then it can probably still be done in a better way” explains Fürst. This Japanese “kaizen” approach is streamlined by automated regression testing to iron out bugs: “nothing is tested manually and we have an ‘immune system’ of tests that becomes stronger and stronger with more tests over time,” explains Fürst.

Clients can also adapt Limina to their developing needs. “To stay cost-efficient we can’t offer internal customisation, but clients can configure the system to perform any task outside of the core system – such as processing a trade or doing swaption-valuation. The REST API is clean, simple and agnostic on programming language,” Fürst explains. “This, together with being configurable to a high degree, makes the system able to function as if it was customised – but with the price tag of a mass market product.”

Fürst dislikes “black box” systems and argues that the future necessarily holds more demands on transparency. Limina’s product Captron lets users lift up the bonnet of the risk engine and instantly see all of the moving parts. “You can click on a swap, and pull apart a discounted cash flow calculation to see which discount factors and cash-flows are beingused. You can see where the floating rates come from and which yield curves are used for forward rates. You can drill down, calibrate and recalibrate to see the reasons behind the figures,” he details.

Transparency also allows clients to decipher what “real time risk management” actually means. This ubiquitous phrase is open to different definitions and interpretations. “Every vendor claims this but sometimes you find that exposure numbers twice a day is being labelled as real-time risk,” Fürst has seen.

The target market
Indeed, hedge fund strategies span a wide spectrum of complexity that Fürst witnessed at Brummer, which runs at least ten strategies. Some of the simplest and most inexpensive systems might be adequate for plain vanilla long/short equity strategies whereas “all singing, all dancing” systems catering for all strategies may be prohibitively expensive. Limina is not trying to be all things to all people, but aims to cover traditional, and most hedge fund, strategies at reasonable cost. “We can handle a level of complexity from a normal UCITS going up to global macro strategies that are still somewhat standardised, but not further than that,” Fürst explains.

At Canosa, Fürst dealt with “CDSs, vanilla swaptions and second generation FX-exotics such as digital, barrier and double-triggers”. However, Limina considers fixed income relative value arbitrage strategies, such as Brummer’s Nektar, to be too few or niche to create a standardised product for.

Smaller and medium sized asset managers are the sweet spot and most hedge fund managers fit into this group. Fürst envisages Limina servicing firms with between three and 20 staff. Fürst recognises the expense of regulatory burdens and wants to help foster continued innovation in investment management. “We want to make it easier for smaller funds to continue to operate and to make easier to launch new strategies,” he says.

VC but no moon-shooting
Though the potential market may be huge, Limina’s business plan pragmatically seeks growth at a measured and digestible pace. Limina is first and foremost a technology company, but Sweden is culturally very different from California, where Fürst had a stint as CTO of Vint to find out why so many successful technology start-ups emanate from Silicon Valley. He observed the moon-shoot culture where the imagination of enormously creative people knows no bounds. “People think they could colonise Mars and sometimes they can, but 99% of the time they are wrong and there was no viable product or market,” he recalls, “but the optimism is really inspiring”.

Limina’s ambitions are far more down to earth. Fürst does not want to sign up more than ten clients in total this year. “It is a slow sales cycle and we want to take care of these clients really well before adding new ones, as great client experience is the entire idea behind the company,” he explains. Since most prospects are locked into existing contracts for months if not years, modular on-boarding is a practical approach. “We can roll out one piece at a time, so the initial commitment is small, and clients can get comfortable with the product and team before moving onto other modules. We are not meant to run as an add-on but can be during the transition period,” Fürst explains.

Limina is in no desperate hurry to add clients partly due to venture capital backing from Mats Berglund, who was active in the 1990s hedge fund industry. He shared some insights into what he looks for in new companies: “with a long background in financial and industrial quality assurance and as an angel investor, an investment for me is always about people, the team, skills, scalability and business platforms”. Limina ticks all of Berglund’s boxes. “In the case of Limina Financial Systems I felt that I met all these competence criteria, including possible scalability. The complete environment of fund management, with a highly competent educated team in Limina with everybody knowing the business area extremely well, is very interesting”. Berglund thinks that Limina has a compelling proposition: “The possibility to offer a technology platform and lower the administration costs significantly, of an old traditional market segment, is extremely challenging and gives every fund manager functionality and cost savings that I believe will attract and be adopted by every economical and operational responsible person in charge”.

Limina’s first client, signed on in February 2017, is a managed futures or CTA fund and was joined by a billion dollar UCITS fund in March. The third client, signed in April, is a fixed income credit fund, trading corporate bonds and credit default swaps, run by Granit Fonder; the fund was founded by Sean George.

Limina business partners
Limina is exploring potential cooperation with other service providers, including brokers and administrators that work with newer and smaller funds, and already has five partners. The alliances are partly motivated by a desire to avoid hidden cost surprises, which most commonly arise from market data or implementation in Fürst’s experience.

On market data, Limina has tied up with Morningstar to offer market data for exchange-traded instruments at a fixed fee. In terms of terminals, Limina has an agreement with Infront that can allow for execution and sending orders back and forth. Meanwhile, Interactive Brokers allows access to pre-integrated FIX Protocol feeds, and some automated portfolio reconciliations.

The architecture remains open so none of these alliances preclude working with big prime brokers, other data providers or terminals.

Future modules
As part of the OMS, “algorithmic execution capabilities are being built out so that clients can execute from the system in a more proprietary way,” says Fürst. “We also timestamp and audit everything, which we can build on for regulatory demands and more”. As the system evolves, more modules may be added as well as introducing new features in current modules.

In a world of fast changing and disruptive technology, there may well be space for a new entrant doing something different.