Seeking to ride the next wave of growth

Originally published in the March 2009 issue 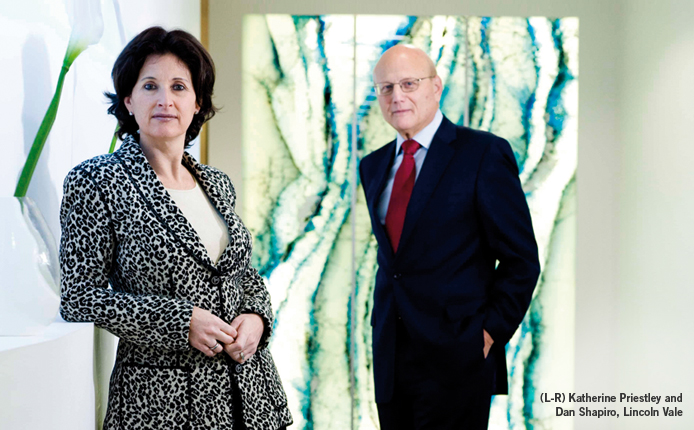 With many hedge fund firms reeling from the extraordinary events of 2008, it is reassuring to find others are still engaged in expanding business platforms, launching new funds and positioning themselves to catch the next wave of the industry’s growth. Lincoln Vale, an alternative asset manager based in London, Boston and San Diego is one such firm.

In September, it scored a coup with the recruitment of Dan Shapiro, the London partner of leading hedge fund law firm Schulte, Roth & Zabel. Shapiro brings over three decades of investment management legal and business experience to Lincoln Vale in his new role as Partner. That piece of team building followed a deal in early 2008 that saw ING Investment Management Americas, the US asset management arm of ING Group, acquire a minority stake in the firm. ING is to allocate substantial amounts of capital to Lincoln Vale fund launches and is a primary distributor of its specialty hedge and private equity funds.

The impetus for the start-up was to create a new operating platform in the alternative investment fund sector. This meant developing a multi-fund business with all the functions and backing that an alternative investment group would need in one place: from funding and risk management to operations, trading and marketing, and legal and compliance. The firm’s inaugural offering, the LV European Partners Fund, a constructive activist equity hedge fund targeting European small-and mid-cap publicly traded equities, launched in 2006. Last year, two funds opened: the LV Adaptive Strategy Fund, a highly liquid fund, which uses technology developed in the field of evolutionary biology and adaptive systems to trade S&P 500 futures; and the LV Shipping Opportunities Fund, which buys, sells and operates ships. A number of new products are scheduled to launch over the next few months: an energy and environment fund, an Asian macro offering and a diversified series of products from the Adaptive Strategy team, including Asian and European Funds as well as a global product.

Like many other leading firms, Lincoln Vale has also recognised the changing and challenging environment to distribute its products and is therefore broadening its capability to distribute beyond the traditional Cayman-based funds to managed accounts, managed platforms (particularly through European banks), and UCITS structures. It is also drawing on the experience and vision of the senior management of the firm to offer investor solutions to key clients.

Creating next generation funds
“If you want to invest in alternatives, where do you go now for the next generation of product that is going to generate the 15%-plus returns that investors had enjoyed over the last 10 years, and now also provide transparency, liquidity and true risk control that investors are rightfully demanding?” asks Priestley during an interview at Lincoln Vale’s light-filled offices adjacent to Chelsea’s Sloane Square. “The idea of the firm was to create product that could be described like that. This is quite challenging. We are constantly looking for visionary and sophisticated investors and investment managers; people with a progressive attitude to investing. That is the philosophy of the firm and our thinking.”

Priestley’s earlier responsibilities at a family office for asset allocation, portfolio construction and risk management give her a unique vantage point to assess the alternative asset sector. “As a buyer of alternative assets for 10 years, what is inescapable is that the industry has continually been evolving and maturing; this has good and bad aspects to it,” she says. “The traditional alternative strategies became overcrowded and we saw a lot of style drift into illiquid assets in search of return. This coupled with some poor risk management led to the decline of performance across many funds that we have seen in 2008. The evolution of our industry is very healthy; the best products have and will continue to adapt and perform, and offer investors an ever more vital part of their asset allocation.”

One timely cornerstone of governance at Lincoln Vale is a centralised approach to risk management. It was designed from inception as a purely independent function. Making the risk function a service to funds ensures the independence of risk that has a critical direct line of communication to the top of the firm. Risk control decisions are taken within the total fund management process, but in extreme cases, outside of the fund at firm level. The message is clear: investment management and risk management are integral, complimentary and of equal importance.

The risk mandates and controls vary across the funds. Since each fund has different risk issues, risk parameters vary too. The Adaptive Strategy Fund, for example, has two formats in response to investor requirements. The more recent product is designed with a higher volatility range and a correspondingly higher potential return. All funds have taken measures to guard against excessive downside risk and principal exposure.

“Our model has stood us in good stead over the past two years,” Priestley says. “I see more firms adopting an independent risk structure since lots of risk mistakes have been made and I think this is very good for the industry and our investors. The extremely high volatility in the equity markets and randomness of market action at times meant it was necessary occasionally in 2008 to overlay risk measures. Since our risk management sits outside the fund, we have the risk team and the investment management team review and determine together how best to control risk. Our process works. The structure of the firm was unusual at the time and might be unusual going forward, but we believe it is one of the strengths of the firm.”

Shapiro plays dual role
Since the firm already has in-house counsel, Shapiro is one step removed from doing straight legal work. Shapiro has helped with corporate governance, compliance, tax planning for investors, structuring new funds and working on equity plans for managers joining the Lincoln Vale group. He is also closely involved with business development, opening doors for the firm’s marketing team to court significant hedge fund investors as well as screening fund management teams that might join the firm. “It is an open plan,” Shapiro says of his role. “I am involved with issues that come up in a company that has every facet of investment management.”

Shapiro has remained a partner with SRZ, a firm that has grown alongside the hedge fund industry for over 40 years. Michael Steinhart was one of its early clients and SRZ advised Julian Robertson and many subsequent ‘Tiger Cub’ funds, as well as George Soros. More recently the fund practice became half institutional and half entrepreneurial as banks were busy setting up offerings in the alternative investment sector. SRZ now has over 80 lawyers working primarily on hedge funds, making it by some distance the US market leader. Shapiro started as a tax lawyer but spent so much time on structuring investment vehicles that he morphed into a lawyer for hedge funds.

In 2002, SRZ looked at opening in London, recognising that US hedge funds had begun to open offices in London and the development of European based hedge funds. Shapiro, who had studied in London three decades before as a Fulbright scholar, says he “leapt” at the chance to return and open an office.

In 2006, Priestley and Cooper approached him to discuss their alternative investment management venture. Shapiro’s considerable experience at SRZ of seed capital transactions for start-up firms – he had done about 30 such deals over the past six years – offered immediate benefits for a quickly developing firm like Lincoln Vale. His contacts with a variety of established seeders, such as Thames River Capital and Michael Dell-backed Skybridge Capital, and others who provided funding to Schulte start ups, looked especially attractive to a young alternative investment platform.

“I did say to them that I was very committed to continuing to build Schulte’s London office,” Shapiro says of his initial discussions with Priestley and Cooper. “We had done a lot of interesting work,” he adds, citing clients like The Children’s Investment Fund, New Smith Capital and Deutsche Bank spinoff Arrowgrass. “I didn’t want to sever my ties with SRZ.” Shapiro balances things by spending several hours each day at both Lincoln Vale and SRZ and observes that the proximity of Sloane Square to the Savile Row office of SRZ helps to facilitate this.

“I like my advisory role on the legal side,” Shapiro says about SRZ. “I don’t see any inconsistencies with that and continuing to do all the things I’m doing at Lincoln Vale. I have called all the clients I work with and they know exactly what I’m doing. I am very transparent with the fact I’m on both sides and everyone seems quite comfortable with that.”

Market turmoil won’t stop fund creation
Experience is a valuable commodity and all the more so at a time when business models have struggled and markets have endured unprecedented volatility. It is, to say the least, a challenging time to be building a new absolute return platform. Not only have investors suffered from poor performance, they have also been hit by the liquidity traps of many hedge funds and the knock on problems occasioned by gates and suspensions on redemptions.

“I think there is still an interest, and I sense this with institutions and in particular family offices, to invest with the best managers who can protect them on the downside as well as doing well on the upside. And while some of that protection wasn’t obvious last year, if you look at what happened in January 2009, for example, hedge funds were on average up 1.0-1.5%, but non-hedge fund invested vehicles were 9-10% down.”

What’s more, the motivation for the best mangers to set up hedge funds remains crystal clear. Obviously the investment flexibility is one draw, the ability to short in down markets another. And now a third factor is in play: bank prop desks are slimming and fat pay packets for those remaining look a rather distant prospect.

“I’ve worked with many of the managers who have left major firms like Goldman Sachs and others,” Shapiro says.

“There is a just a great incentive for them to do that now. Is there money for them to start hedge funds? The answer is that there is a lot of seed capital out there even if seeders are pulling back a bit to figure out who to sponsor.”

“My own perception is that the industry is changing but there are still plenty of opportunities for good managers,” he says. “People say that the best and the brightest have gone into the hedge fund business. There will still be opportunities but it will be more difficult to secure the necessary start-up backing.”

In this environment, the opening for Lincoln Vale is clear. The firm can bring funds onto its platform and work with managers to secure backing. “We say ‘Come in: we’re going to work with you, we’re going to risk manage and handle your trading’,” says Shapiro. “People who invest with Lincoln Vale will know they are not just giving their money to a fund of funds to be allocated to lots of other funds, but to a group that is going to have much more control and involvement in the management of the money. This model is a sensible place for people to put money.” He says Lincoln Vale is more than just a platform: “It is really a full service multi-product alternative investment management business both to help funds get started and to assist them as they grow.”

Adds Priestley: “The opportunities have never been greater. We are very excited about the next year or two. We are under no illusions – these are hard times. But there is a lot more appetite for the way we think about non-correlation and differentiation, and what we are doing to create progressive fund products.”