How the market dynamics have changed

Originally published in the May 2018 issue

Oil prices are rising, driven by strong global growth and the reemergence of a Mideast risk premium. The market dynamics of this round of oil price increases, however, are strikingly different from recent episodes, such as in 2008 or 2012-2013. There are two key differences this time around that deserve our focus: (1) shale oil supply may respond more rapidly to price incentives than older technologies, and (2) the US is now an oil exporter (as well as importer). As we explore these two topics, we will see some special nuances and caveats, too. 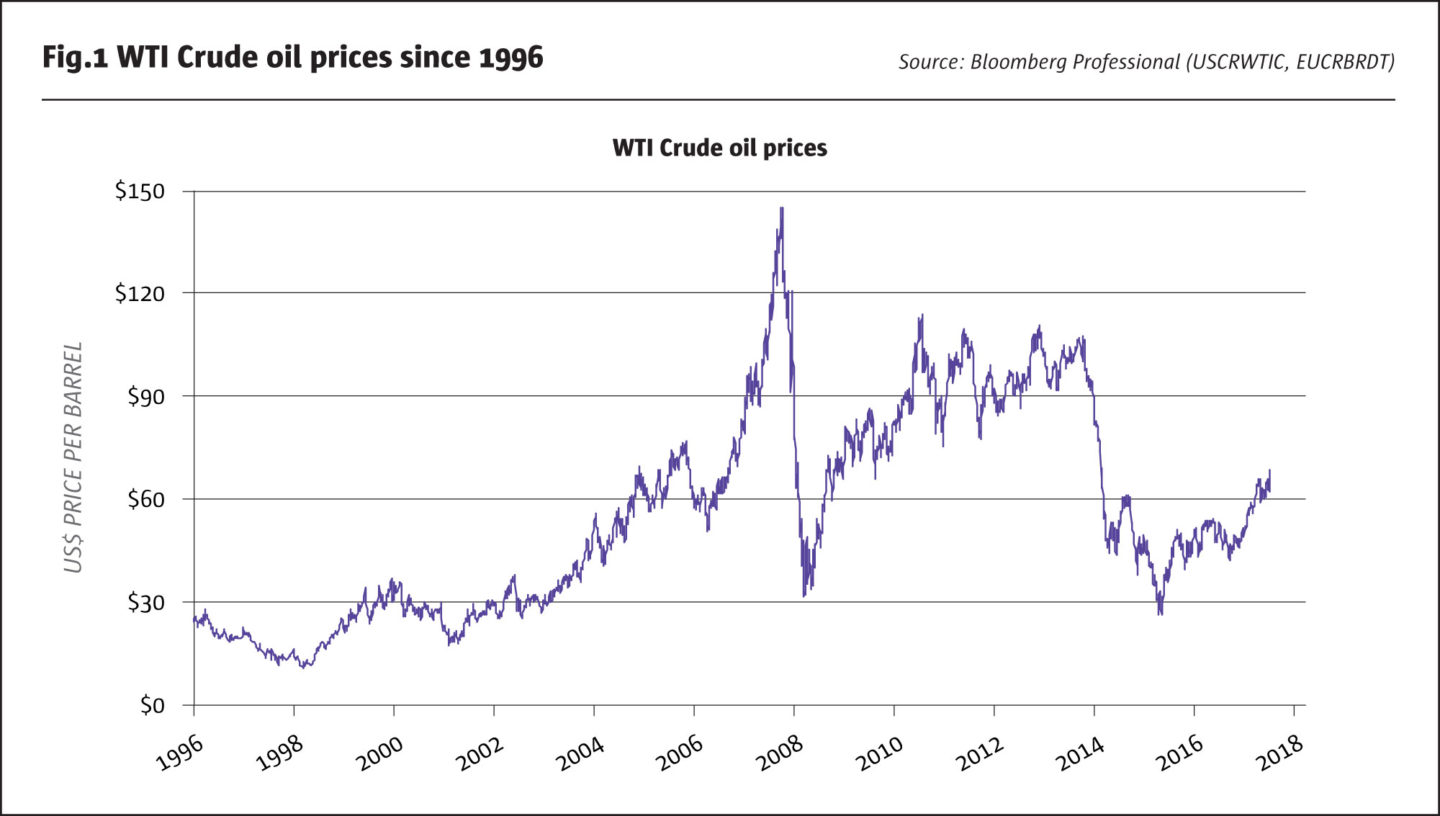 The collapse in the price of oil that began in the fourth quarter of 2014 and hit its trough in February 2016 was a delayed response to the massive increase in supply brought about by the US shale oil revolution. The first stage of the price recovery during 2016 into the $40 to $55/barrel range was mostly an unwinding of the price, having been driven considerably below the marginal cost at which US shale producers could profitably extract oil. During the oil price slide, there was selling by institutional pension and endowment funds, mostly through third-party managers, as these funds cut their asset allocation to commodities in general and oil in particular. There were also forced liquidations due to financial distress among certain oil market participants. Once the asset allocators had rebalanced and the financial distress selling had ended, the oil price drifted back up to better reflect the supply economics of the shale extractors who were emerging as the swing producers to challenge OPEC in the global market.

We are now in a second stage of price increases taking the range up toward $60 – $85/barrel. This time around the drivers are, first, the faster pace of global growth and secondly, the arrival of a Mideast risk premium due to rising tensions between Iran and Saudi Arabia, major oil exporters. (See CME Group Senior Economist Erik Norland’s research report from March 21, 2018, “Oil: Could Iran Risk Reverse Options’ Bearish Signal?”. Both the global growth and Mideast risk premium price drivers are expected to remain in play for the rest of 2018 and into 2019, keeping upward pressure on the price of oil. There are, however, mitigating factors, too. 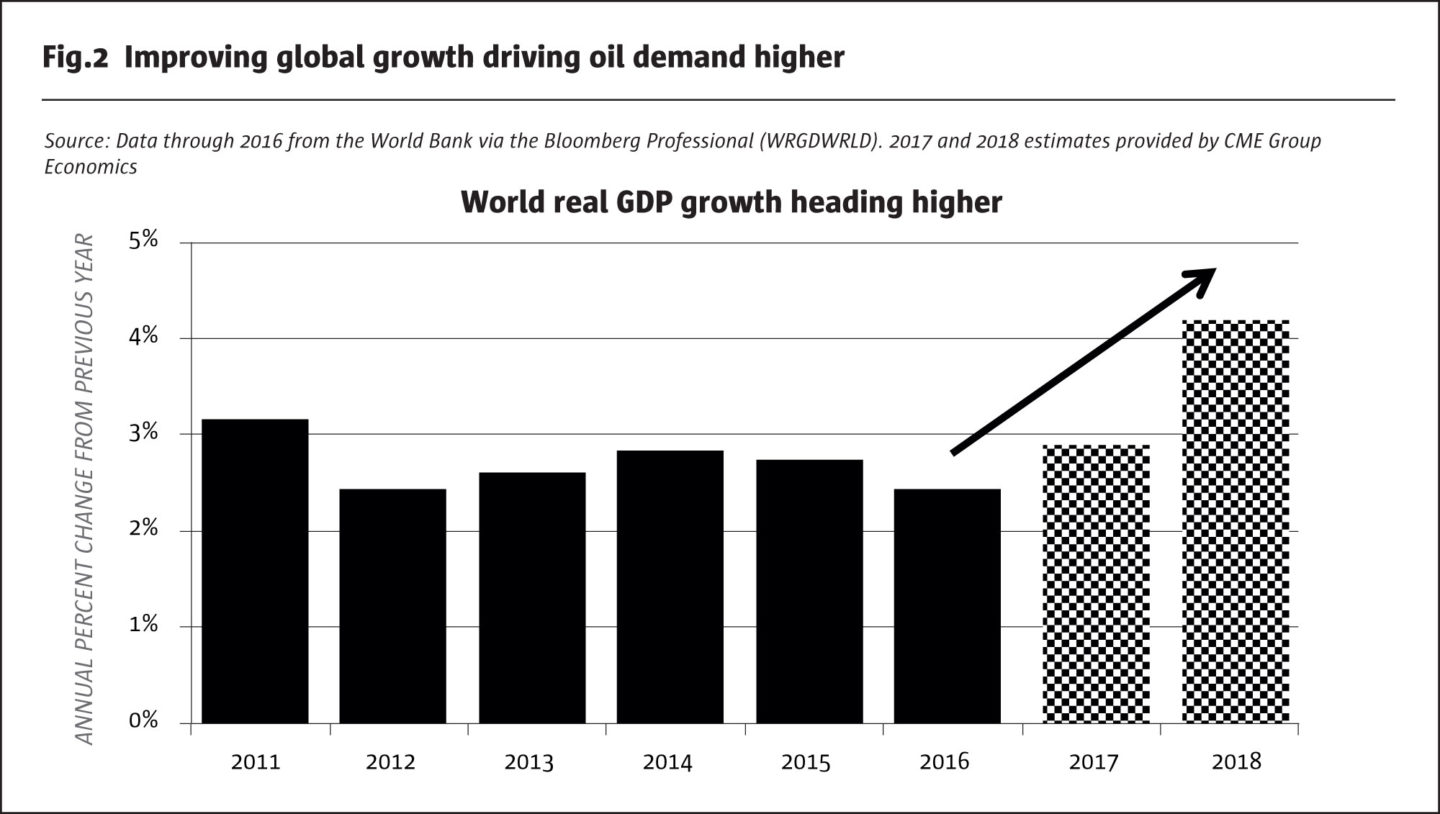 With US shale oil producers able to lift production more rapidly than more traditional extraction technologies, oil supply may be more elastic, at least over a 6-to-18-month time horizon than during past episodes of oil price rises. OPEC, or we should say Saudi Arabia and Russia, may also stop curbing production as prices rise closer to their target range.

In addition, at the end of 2015, the US lifted its ban on oil exports, and since then the US has become an important oil exporter on the world scene even as the US continues to import oil. The importance of the US being a meaningful oil exporter does not so much impact the level of prices as it does to forge a tighter linkage between competing benchmarks, especially West Texas Intermediate (WTI) and North Sea oil or Brent. Let’s turn first to the increased supply elasticity factor and then to the links between WTI and Brent.

When a commodity has a relatively fixed or inelastic supply, then for given changes in demand the impact on prices is magnified compared to a commodity with highly flexible or elastic supply. Natural gas is an example of a commodity in which supply responses to higher or lower prices are highly constrained in the short and even medium term. Not surprisingly then, natural gas exhibits considerable price volatility due to demand swings, often driven by changing weather patterns.

Even before shale oil, crude oil production was always more elastic and responsive to price changes than natural gas. Short-term demand changes may be met by adding to or withdrawing from inventories. Also, Saudi Arabia often acted as the swing producer, feeling that it was in its long-term interest to have a less volatile price of oil. If upward price pressures persist and are perceived as long lasting, then both US shale producers and OPEC may implement plans to increase long-term production.

Clearly, shale oil has changed the calculus for medium-term supply responses. Shale wells can be drilled and completed much more rapidly than traditional wells. With shale, the oil production peaks after 3 or 4 months and then declines towards zero in 18 to 24 months. What this means is that if the oil price rises considerably above the marginal cost of completing a new shale well, then shale oil producers can respond relatively rapidly to higher oil prices. Since the shale production occurs over an 18-to-24-month time span, the impact on supply will dissipate naturally if the price falls and removes the incentive to put more shale wells into production. We also note, that shale producers are more likely to use risk management techniques, especially strips of oil futures contracts, to hedge price risk, since the flow of production from a shale oil well is reasonably predictable over its 18-to-24-month life. This means that the production pattern from that well will be unaffected by any subsequent price changes. Oil production six to 12 months out, however, still will depend on new shale wells going into production, which will be a function of price, as well as many other constraining factors.

While the estimated marginal cost of putting new shale wells into production is a key metric, a sole focus on marginal costs will tend to over-estimate the supply response to higher prices. Not all shale oil rigs are created equal. Modern rigs can maximize output with sophisticated drilling sensors and more precise geological mapping. As supply ramps up, some older, less efficient rigs may enter production, too. Rigs also require skilled workers, who may be in short supply as production rises. Inputs into the hydraulic fracturing process may also hit constraints, such as the supply of sand to mix with water and pump into the wells. We note that while financing is generally available, there can be delays in arranging financing for capital projects and rising interest rates are raising financing costs. Finally, one needs to consider that from time to time, there may be limits of the quantities of certain types of oil that refineries can easily accommodate, which could limit shale’s production temporarily. 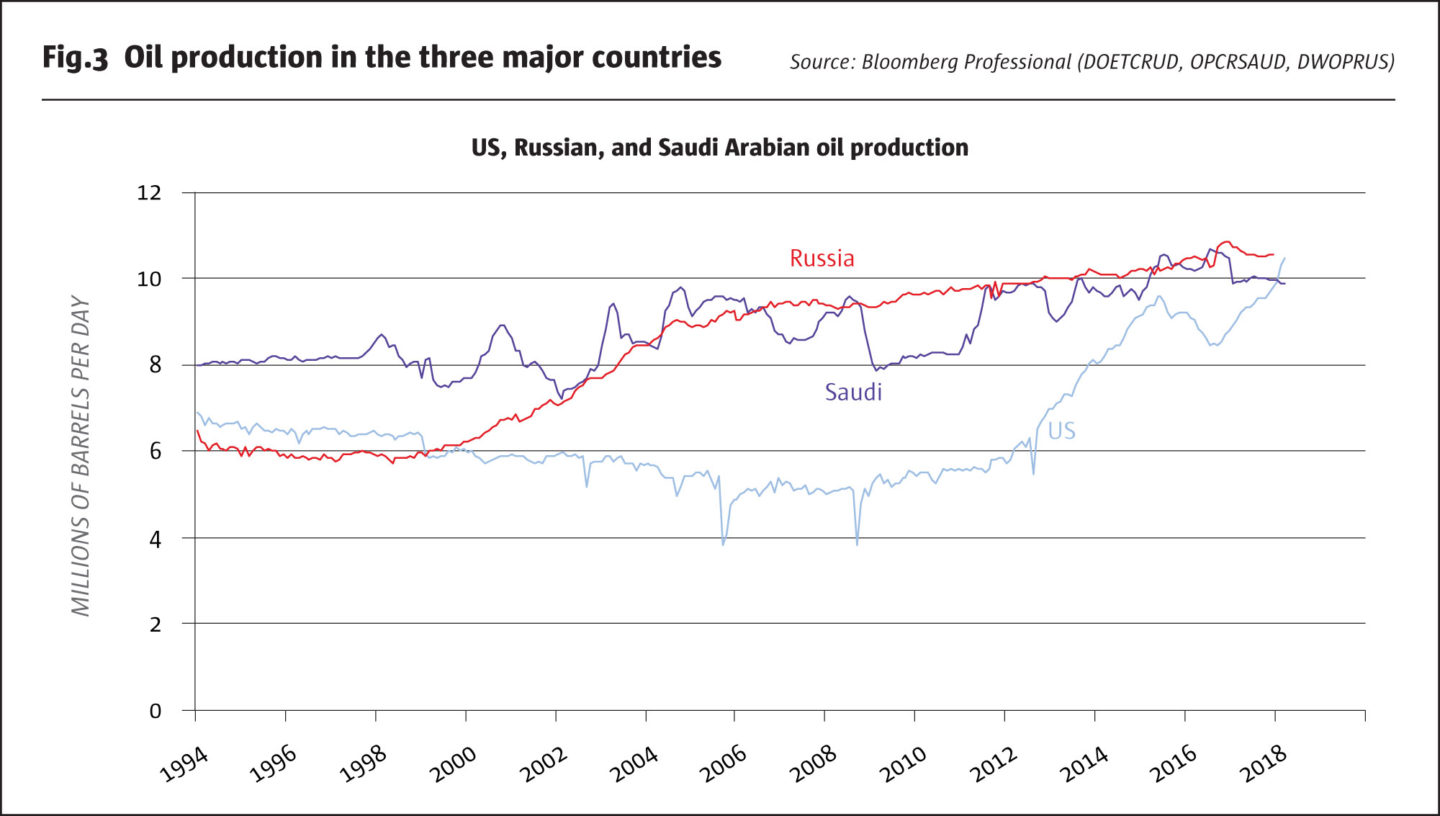 None of these constraining factors are going to stop the rise of shale oil production in the US as oil prices rise and remain above $60/barrel. We want to caution that the estimating a supply response to higher prices is much more complex than simply looking at the spread of the oil maturity curve versus the expected costs of production.

This time around, with oil prices above $60/barrel and rising with global growth and Mideast tensions, the production increases in the second half of 2018 and into 2019 are likely to take US oil production toward 12 million barrels per day in 2019. This compares with current Russian production of around 11 million barrels per day and Saudi Arabian production of about 10 million. One must remember that just before cutting production, both Saudi Arabia and Russia bumped production up close to their limits to make the cuts look bigger. Still, if we are correct that OPEC may roll back its production restraints, then as much as 1.5 million additional barrels a day of Saudi oil may be coming to market in 2019 and possibly 0.5 million barrels a day of Russian oil.

This amount of new production would put a cap on oil prices even with growing global demand if it was not for the Mideast risk factor. To estimate the current Mideast oil premium, we want to examine the oil price futures maturity curve. The oil curve is in backwardation as of mid-April 2018, with WTI nearby month prices over $65/barrel, while the 24-month futures price is close to $57/barrel. There are other factors influencing the maturity curve than the Mideast risk premium, but as recently as October 31, 2017, the curve was flat in the mid-$50s territory. We estimate that a $7/barrel risk premium may already be priced into the market and a $10 to $12/barrel premium is possible if Saudi-Iranian tension continues to escalate. 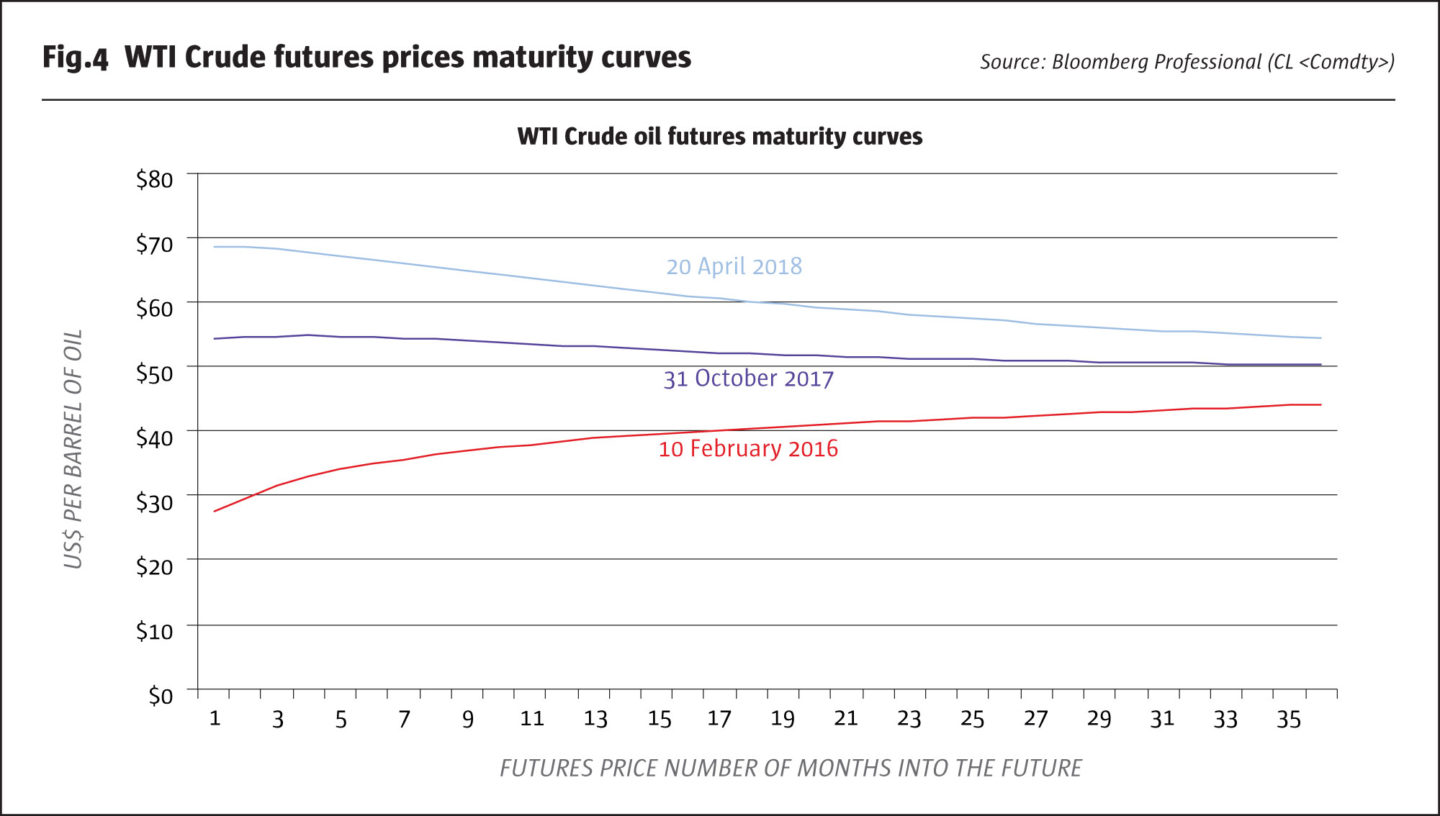 The shape of the maturity curve also has a big impact on the willingness of shale oil producers to expand production. The spot price is the headline grabber, but the 6-to-24-month futures curve represents prices at which future production from a completed shale oil well can be hedged. And the 6-to-24-month futures price range is still below $60/barrel. That is high enough to incent more production, yet again we are sounding the warning not to get too excited about future US oil production going through the roof – steady growth though, seems highly likely.

US Oil exports and the Brent-WTI price spread

What matters to the Brent-WTI price spread is the connection point around the world. Back in the early stages of the shale oil production ramp-up, oil production overwhelmed the pipeline infrastructure and the Brent-WTI spot price spread widened to $20/barrel or more. Then, railroads came into play and massively increased capacity to bring Bakken oil to the East Coast refineries, where it could compete with Brent, or Brent substitutes, being shipped from Europe and the Mideast. That drove the spread closer to $10/barrel, or more or less the cost of railroad transport. As the pipeline infrastructure was improved the price spread narrowed further. And with the US now an oil exporter, the global connection price is partly determined by shipping costs. 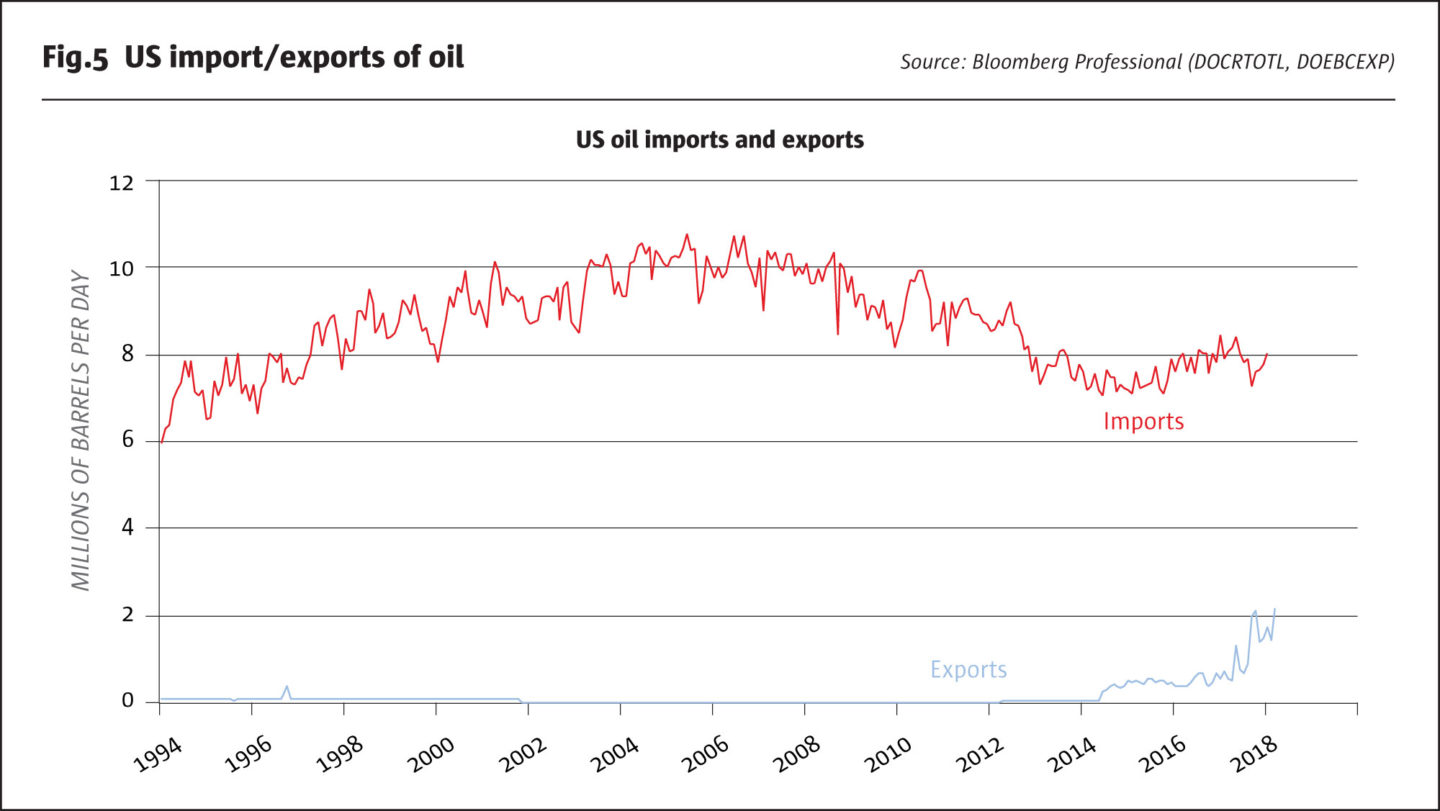 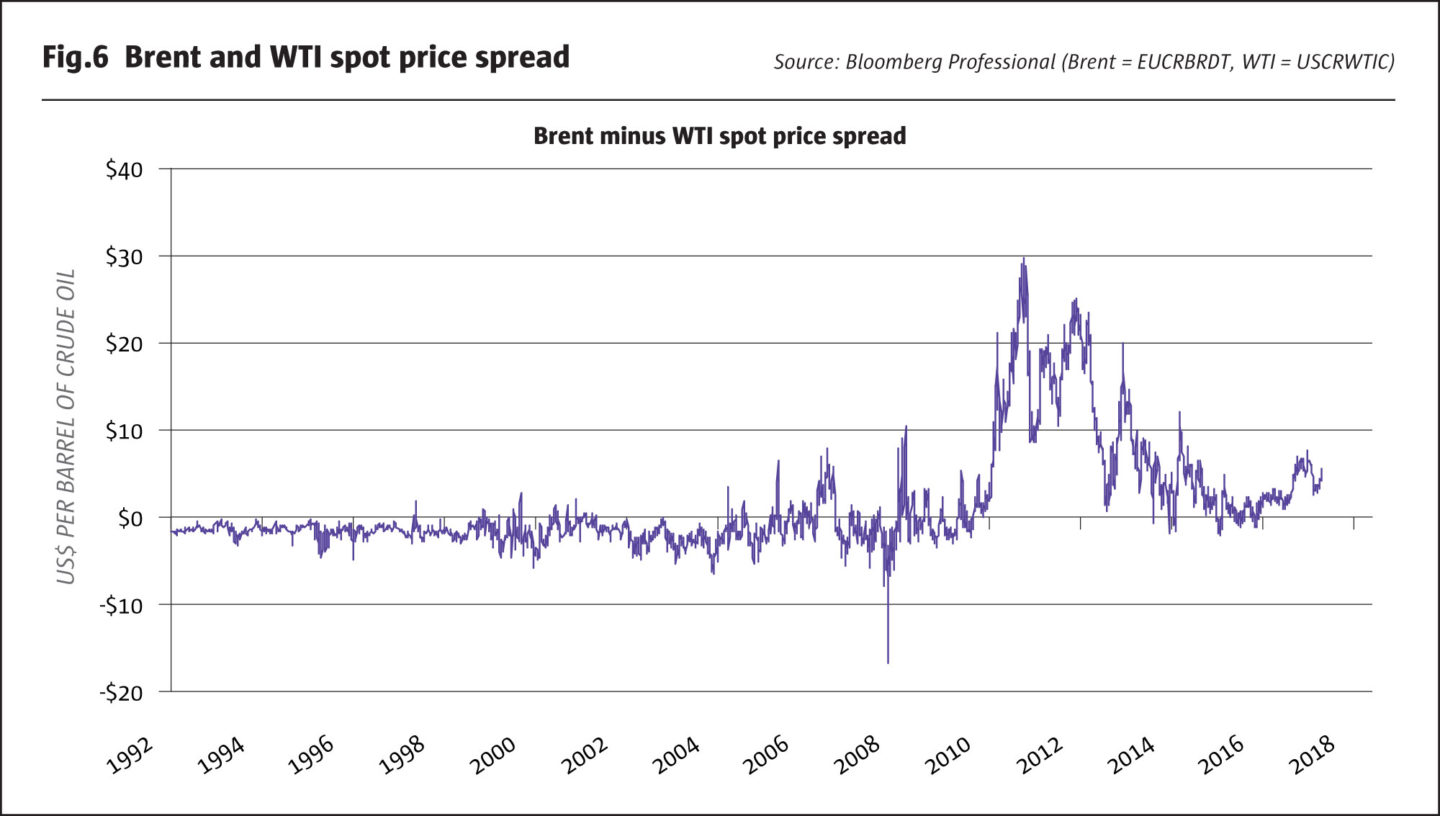 Shipping costs are a moving target, due to different vessel sizes, different contract terms (spot or term contracts for multiple shipments), fuel costs, etc. Nevertheless, somewhere in the $4 to $5-plus range, a tanker full of US crude can leave the US Gulf of Mexico and head for Europe or China. As more and more US shale oil production comes on line, some of it will find its way to export facilities in the Gulf of Mexico and thus serve as a key link in the Brent-WTI price spread determination process.