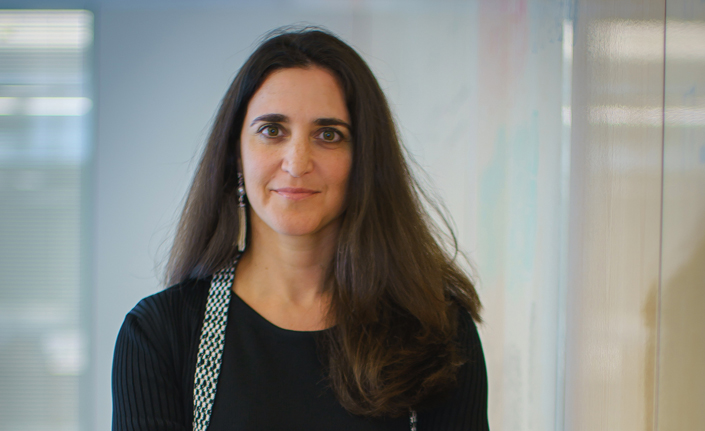 Elif Aktug has featured in The Hedge Fund Journal’s biennial 2016 ‘Tomorrow’s Titans’ survey of ‘rising star’ hedge fund managers, and in our biennial 2017 ’50 Leading Women in Hedge Funds’ survey, both of which were published in association with EY.

Aktug is lead fund manager of Pictet Asset Management’s Agora, a European equity market neutral strategy running USD 2.3 billion that has received multiple awards. For example, the USD 1.4bn PTR-Agora, the 2014-launched UCITS vehicle of the strategy, is a multiple winner of The Hedge Fund Journal’s UCITS Hedge award for best performing fund in the equity market neutral (Europe) – discretionary category. The Agora team also manages assets in a Cayman vehicle, launched in 2011, as well as sleeves of some multi-strategy offerings (such as Pictet TR Diversified Alpha) at Pictet. Unlike some UCITS that are modified versions of a flagship strategy, all Agora strategy accounts are run pari passu. Agora strategy assets are close to the intended capacity level and the team likes to keep the strategy capacity-constrained as their main focus is on performance rather than asset gathering.

The Sharpe ratio has been around 1.5 with a correlation to MSCI Europe of 0.2 and correlation to S&P 500 of -0.1, and this limited market sensitivity has been a result of the team’s focus on stock selection as the key driver of performance. “Ultimately, stock specific catalysts are what we want to capture, whether it would be around merger activity, corporate restructurings, change of management, divergent earnings expectations etc. We keep the strategy market neutral by construction, hedging out unintended risks,” says Aktug. The focus on downside protection is demonstrated by Agora having held steady with flat performance over the worst months for the MSCI Europe. “We like to avoid situations where the risk/reward is too binary. We aim for asymmetric risk/reward with more upside than downside,” Aktug points out.

She has been managing Pictet Agora for more than six years but has been pursuing a similar investment approach in her previous role. Aktug ran the European long/short book (but not the volatility, macro or capital structure arbitrage books) at Goldman Sachs Principal Strategies (GSPS) in London before the Volcker Rule forced Goldman to cease proprietary trading in 2010. Pictet offered Aktug the opportunity to recreate the catalyst-driven, European large-cap, market neutral strategy. Aktug had confidence that Pictet’s strong back and middle office infrastructure, including trading and compliance, would let her focus on stock-picking, and was also able to hire her own, dedicated team of five, which is at full complement. “Having a small, cohesive team is a key part of our philosophy of managing money and keeps our focus on generating alpha. This is important as intra-team dynamics can hamper some funds over the long run,” she says.

The team, Pictet and Geneva
The Agora investment team contains three risk takers and two analysts. The risk takers split coverage of the investment universe by sector. “Each sector has a ‘captain’ and a ‘backup’. The captainwill be one of the risk takers with most knowledge, from their investment banking work, career, or key relationships with companies. The sector backup is intended to play a devil’s advocate role and react to news-flow if the captain is travelling or not at their screen,” Aktug says.

“We build our own earnings models, levering relationships with companies,” she goes on. Aktug and her colleagues are multi-lingual. Aktug’s high school studies and first degree at Sciences Po, in Paris, were in French, while her MBA at Stanford was taught in English. Other team members are fluent in German, Spanish and French in addition to English. All of these languages can be used in dialogue with companies. Aktug was positively surprised by the quality of Pictet’s corporate access partly because companies know that the venerable Pictet is a long-term investor. In particular she finds that “when management teams come to Geneva there is less competition for their time.” Aktug believes the Agora process is also distinguished by “its ability to connect the dots. We compare what a CEO says today with what they said six months ago, at another time in their career, and with what competitors are saying. We look at boards and management teams and compare what they are doing with what they are saying; and we try to put ourselves in management’s shoes and anticipate changes to company strategy.”

Aktug also finds the Geneva location advantageous in terms of “being away from the London and New York herd mentality of crowded trades,” and likes to hear those with an opposite view. The Agora team makes some use of sell side research, partly to gauge what is already factored into consensus opinion – and what could be contrarian, and therefore offer upside.

Synergies with other Pictet investment teams are a key benefit of the culture. “The depth and width of the business lets me interact with teams in other asset classes during our weekly meeting across all risk takers, portfolio managers, strategists and economists globally. Hearing about emerging market debt flows, high yield, emerging market equity, bond yields, and currency positioning can have an impact on our investment thinking.” (The Agora team, strategy and process are quite separate from other total return strategies at Pictet. The Corto team, led by Phillippe Sarreau, for example, focuses on a different investment universe with access to small and mid-cap stocks and some directionality.)

The Agora strategy: catalyst- and alpha-driven investing
The Agora strategy “leverages the team’s history of relationships and knowledge at the company level in European large caps, based on our backgrounds in investment banking and private equity,” Aktug explains.

European equities are perceived to be a relatively inefficient asset class, so Aktug finds that markets dominated by macro drivers can throw up opportunities for stock-pickers: “Recently, there has been too much focus on monetary policy, macro, FX, politics, asset class flows and positioning. During periods such as 2016 and 2017, consensus longs and shorts were hit much more. Passive investment is also creating opportunities.”

“We aim to anticipate stock-specific events to capture inefficiencies that are not reflected in share prices. Timing is everything and we thrive on that. The focus on catalysts is key to our long and short books. Of course, we also want valuation upside for longs and valuation downside for shorts. But as we have a relative value approach, what matters is what will make longs outperform our shorts (and vice versa if our investment thesis is on the short side), based on earnings or valuation multiples or both, over the next three, six or nine months. We build a risk/reward analysis assessing our investment case across upside, base and downside scenarios,” says Aktug.

Agora has a high conviction portfolio of 35 core catalyst-focused ‘strategies’ (and up to 50 or 60 strategies in total). Each strategy, and thus the portfolio overall, is market neutral by construction. A ‘strategy’ contains at least two components – a long and a short – and may sometimes be a pair trade but may have multiple legs to hedge various risk factors. There might be one long position with two or three shorts for instance. “The objective is to isolate the idiosyncratic, stock-specific risk, and hedge out unintended or unwanted risks, to extract the alpha,” states Aktug. The undesirable risks can include sector risk, where this is not part of the thesis, market risk, or other risk factors – such as currency, country, and bond yield sensitivity. Position sizing and associated hedges are adjusted dynamically, to reflect shifting risk/reward, positioning and news-flow.

Stock-specific risk
Whereas some equity market neutral strategies are systematic and quantitative, Agora is discretionary and fundamental. Whereas long only ‘smart beta’, and market neutral ‘alternative risk premia’ and ‘style premia’, strategies explicitly offer exposure to styles or factors such as growth, value, momentum, quality and so on, Agora aims to avoid exposure to such factors at most times.

“The first quarter of 2014 was a wake-up call around style and we pay much attention to these factors,” says Aktug. “Our approach to trade construction naturally dampens style risk. We would look to combine a long and a short with similar market sensitivity, typically within the same sector,” says Aktug.

“Over the long-term, the vast majority of Agora returns are attributable to single stock risk, with limited impact of country, sector and factor exposures.”

Tactical risk management
The Agora team is alert to adverse market climates and stays liquid enough to swiftly expand and contract the book. “Gross exposure is our primary risk management tool. If headwinds are expected to make stock selection difficult, we would rather decrease gross exposure than try to hedge. In late 2011 at the height of the European sovereign crisis when there were risks of Germany exiting the Eurozone, we cut gross exposure from 150% to 8% in a week. This might only happen every five or seven years, but you do not get a warning, so liquidity must always be there.”

The Agora strategy also cut risk going into the UK Brexit vote by reducing both long and short exposure to UK stocks. Similarly, the long and short books in France were scaled back before the first round of French presidential poll in 2017, when there seemed to be a real risk of Marine Le Pen winning. Not every election leads to risk reduction however. “We did not perceive risks at the European large cap level around the US Presidential election, the Italian elections and the Catalonian referendum, so did not make adjustments to gross exposure. We only cut back the book when we expect an asymmetric impact,” Aktug explains.

High conviction views in early 2018
In late 2017 Agora expanded gross exposure to over 250%, the highest level of the past five years, as Aktug judged that the climate for stock selection had improved: “an environment of declining correlation, and increasing dispersion is more attractive.”

Though factor exposures are marginal, opportunities the team is taking advantage of in early 2018 have a slight tilt to being long value and short quality. Aktug reckons that the long, multi-year, under-performance of value could be coming to an end. “Value under-performed due to monetary policy and risk aversion around the Eurozone. Low and negative rates encouraged investors into bond proxies: quality stocks with high multiples. Now that the economic recovery in Europe is gathering momentum, we are at an inflection point. Interest rates are no longer decreasing, and should start increasing at some point.”

“The last two years have coincided with a pickup in M&A in Europe, which fits in well with our focus on catalysts and identifying events ahead of time. At the start of the cycle we made more money through acquirers. Now the focus has shifted to targets and we have had success in identifying the sectors where M&A will continue, such as leisure, telecoms, real estate, chemicals, aerospace and defence.”

“The Eurozone recovery is happening now in the context of global synchronized growth. We think this is not appropriately priced into some sub-segments. We have had many false starts and noise with reflation trades and infrastructure. The big need for infrastructure in the US and Europe makes us very bullish on construction and particularly on operationally leveraged names (such as CRH and St Gobain) where we expect the earnings will start coming through.”

“Eurozone banks are linked to the dual theme of Eurozone recovery and yields going up. They are a trading sector, but we expect that some French and Italian banks will finally gather some real interest from long only investors.”

On the short side, a pickup in inflation “could increase costs and wages. Inflation and wages could normalise across the Eurozone. Wages in Germany may catch up due to the new Grand Coalition. Higher energy prices will also pressure some companies, particularly in sectors such as business services and retail, where they lack pricing power.”

All of this top-down thematic thinking is of course expressed through precise stock picks and trade structures, to match the guiding principles of the Agora strategy.

A real contender for illiquid strategies