Originally published in the June 2018 issue

We spend a great deal of time talking to overseas investors about the UK. As a fund with a specific focus on secured lending in the UK market, it is natural that they will want to ask us about the current political and economic climate in the UK, as the national debate on Brexit will fill much of the news agenda overseas investors see coming out of the UK.

But the investment case for UK private debt is much wider than simply Brexit. There are a number of other important fiscal and business factors that are creating opportunities for investors in the UK at the moment, along with fundamental changes in the way business is being financed and how business is seeking to improve efficiency and productivity.

In this article we look at the case for alternative lending in the UK, why its role is becoming more important and also what is driving the increased institutional investor interest in this asset class.

The challenges for small businesses

Owners and managers of small and medium-sized enterprises (SMEs) in the UK may sometimes feel that the world is out to get them. Running a small business is tough enough without the panoply of obstacles that have been inadvertently created for UK companies over the past few years with the generation of mountains of post-2008 ‘red tape’.

A week does not seem to go past without issues being thrown up for businesses owners around one or more marquee names in the banking industry.

For example, the Royal Bank of Scotland announced in May that it would be closing 162 branches across England and Wales. This followed other announcements to close 52 branches in Scotland and a further 197 NatWest branches, part of the same group. According to the Unite trade union, this will force many customers in rural communities to make a return journey of 25 miles to reach an alternative bank branch. 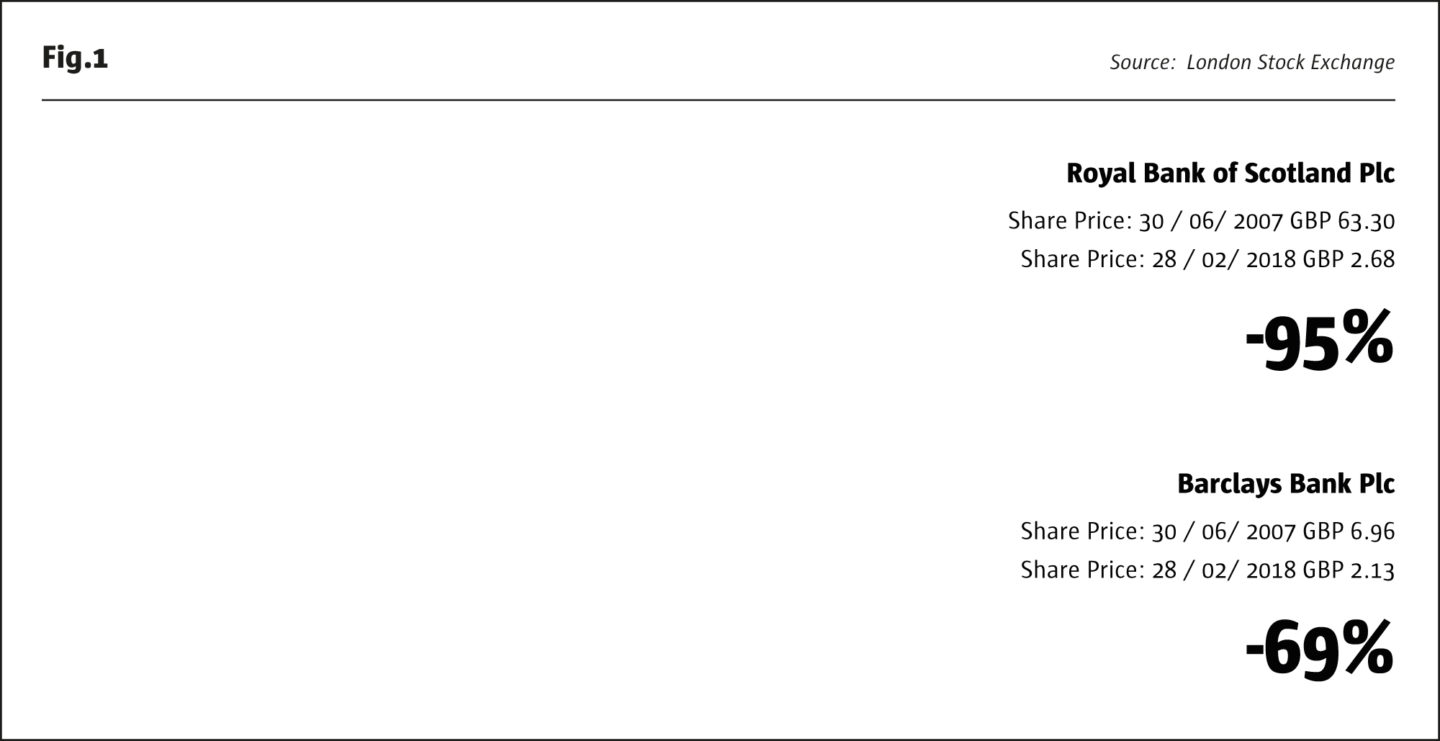 Why this is important is because banks have acted as critical nodes of knowledge and relationships that could help to inform lending decisions in the UK SME sector, particularly in rural areas. Banks are conceding this ability to lend directly to smaller businesses, but are also vacating the market entirely, making further problems for firms that need finance to expand their enterprises.

Yet all this bad news comes in the wake of the introduction of some of the toughest banking and capital adequacy regimes the industry has ever seen. M4 net lending to small and medium enterprises in the UK, and it is a pattern that is reflected in other markets, fell off a cliff in 2009-10 and has never returned to what it was.

Beyond that, however, banks also look less profitable due to the introduction of IFRS 9 accounting standards which apply to institutions in more than 120 countries. The standards came into force on 1 January of this year and will mean banks will have to increase their provisions against credit losses. We believe this may further restrict or delay lending to SMEs, leaving private lenders including private debt funds to play a more important role in this market.

On top of this the UK government has also required its largest banks (those with a three-year average of more than GBP 25 billion in core deposits) to ring fence their essential banking services (e.g. plain vanilla retail banking activity) from their other banking activities.

The overall impact on business lending in the UK is going to be significant. In total, forty per cent of the UK’s bank branch network has closed over the last five years, with over 1000 branches shuttered in the last two. This is choking a traditional artery of essential business finance into the UK economy, particularly in rural areas. 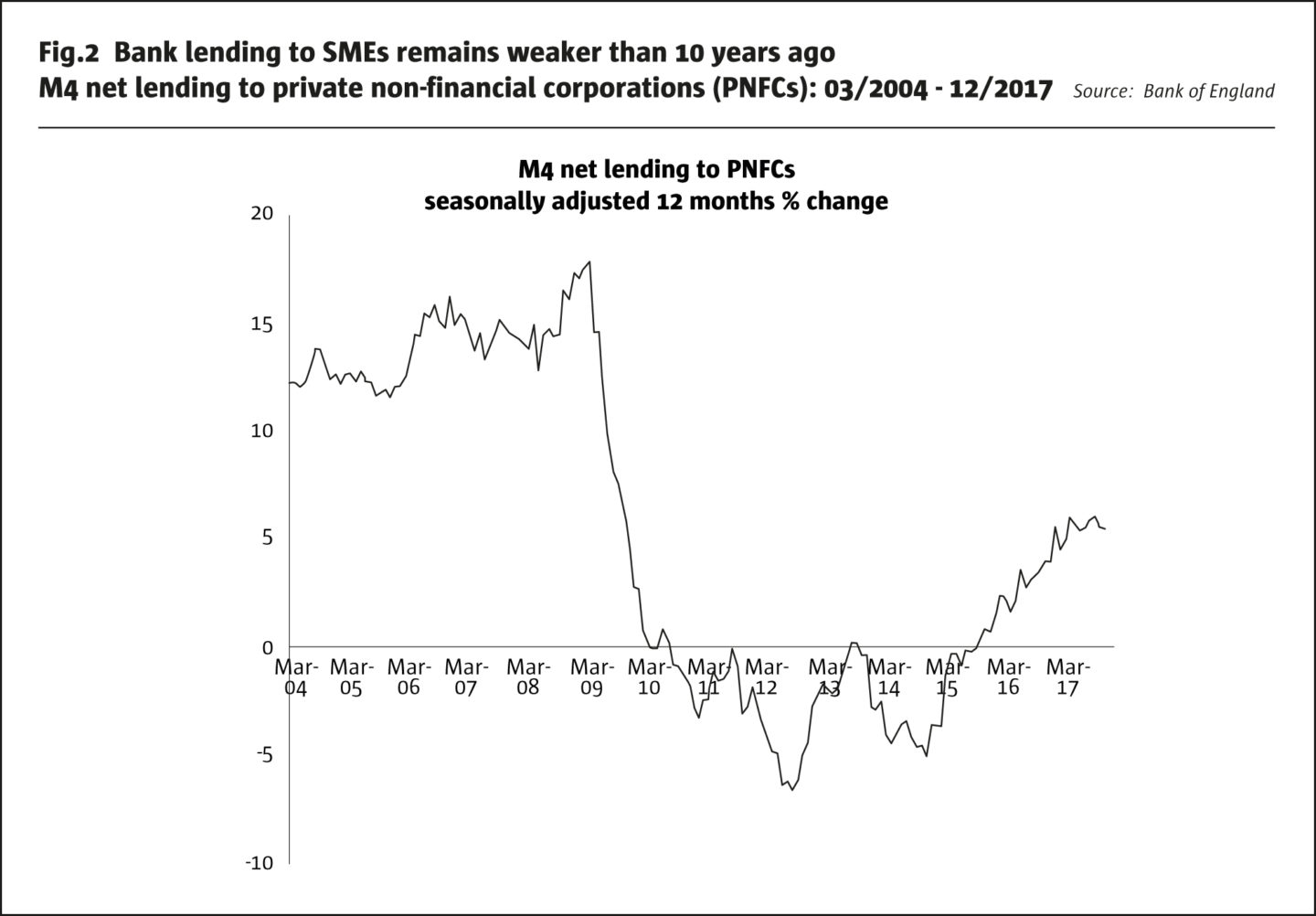 Another area of valuable financial assistance for many SMEs in the rural economy in the UK has been renewable energy subsidies. They have now been excluded from Enterprise Investment Schemes (EIS) and Venture Capital Trusts (VCTs). Tax-based investment schemes that benefited from initiatives like the Renewables Obligation Certificates (ROCs) were removed in 2014 and have impacted the closed-ended EIS and VCT vehicles that were investing in renewable energy projects and were starting to mature.

These funds will now need to sell complete and incomplete projects in order to raise cash. In addition, newer renewables projects that are so essential if the UK is going to achieve its clean energy targets, will not be able to source the funding they will need in the future from these sources.

The introduction of both MiFID II and the accompanying MiFIR directive, which also arrived on the scene in January, have expanded the scope of MiFID to cover a broader range of companies and financial products. These directives are starting to create additional costs and bureaucracy for SMEs across Europe, as well as considerably raising the cost of capital for traditional bank lenders that offer wealth management or lending. We think this will restrict or delay the provision of finance to smaller European businesses. 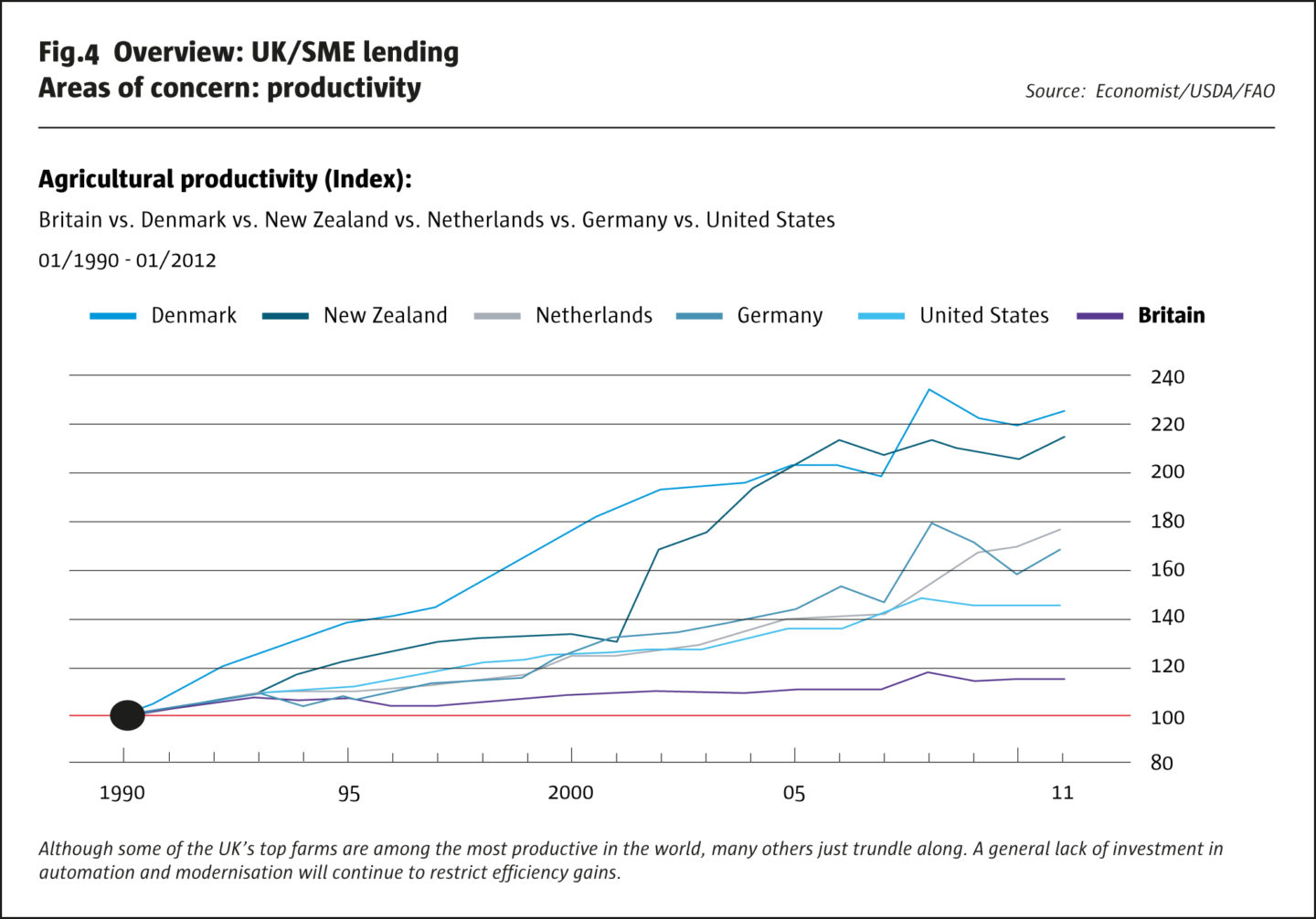 You might not see all this doom and gloom reflected in the economic outlook for the UK: it currently has some of the lowest unemployment in Europe with levels not seen since the 1970s. There has been a marked increase in overall productivity and there is still a significant flow of net inbound migration which the economy continues to absorb. According to Migration Watch UK, while numbers have dropped since the Brexit vote, net migration into the UK is still over 200,000 per annum (based on 2017 figures).

The UK economy is still a good place to be if you are a private debt manager: inflation seems to have been contained, the Bank of England has stepped away from a rate hike and UK 10-year government bond yields are currently lower than Australia, Canada, Italy, Spain, New Zealand or the USA. Additionally, a weaker British Pound makes UK/Sterling-denominated assets more attractive to Euro and USD based investors.

Why are investors allocating to private debt?

But in both the UK and more broadly across Europe, private debt remains a compelling asset class for institutional investors, despite these political and fiscal factors.

According to data compiled by Preqin, allocators like Partners Group in Switzerland, the African Development Bank, the New York State Teachers’ Retirement System and the Netherlands Development Finance Company have all allocated billions of dollars to private debt strategies. At Prestige we have raised almost USD 500 million for our own secured lending funds since the Brexit vote was held. Over 80% of this has come from non-UK investors. Europe remains one of the favourite destinations for private debt investment. We have seen interest from investors from as far afield as China and Korea, and this is matched by intelligence from Preqin, which has noted a surge in interest from Asia-based investors in private debt, who now account for 11% of the total investor base, up from 6% of active investors in 2016.

Aviva Investors recently announced findings that support this trend, with both UK and European pension schemes announcing their intentions to increase allocations to alternative income strategies by 40-50%, as they seek the downside protection and diversification benefits such assets can provide. Private business debt remains the most popular asset for such schemes.

But what is the attraction of private debt strategies?

Interest rates remain low in the UK and Europe. Investors like insurance companies are seeking higher and more consistent yields than they can achieve from traditional government debt investment. The private debt asset class is very different from Treasuries or standard corporate issues – it is not rated and it is not included in benchmarks. But that is not a deterrent.

According to research carried out by PwC and Lendity [1], alternative lending has the potential to produce solid returns at a fraction of the volatility of other asset classes. They used the Orchard US Consumer Online Lending Index as a proxy due to a lack of index data for the European market at the moment, but it illustrated that between 2011 and 2017 alternative lending was able to achieve an annual return of 6.44% versus 3.90% for 10 year Treasury notes and 2.65% for investment grade corporate bonds.

Alternative lending was able to achieve this with an annualised volatility of 0.59% versus, for example, 5.58% for Treasuries and 11.30% for US equities.

The research also shed light on what is driving the returns for alternative lending and why it has been able to outperform public markets so starkly over the last eight years. Apart from filling the credit void left by the banks, something I have highlighted above, alternative lending brings with a different type of credit risk premium that comes from accessing the SME and consumer sector. There is no leverage or tranching involved – which means the strategy is accessing credit at its purest level and in the case of Prestige we operate without a performance fee.

Because there is no exposure to public markets, the level of volatility within alternative lending is also very low: while the market is semi-liquid and some might argue this makes it an unfair comparison with public markets, the nature of the asset class is that business loans are still generating a monthly income in a very stable and predictable manner. This can also be set against diversification across literally thousands of creditors; in our case we only participate in secured lending, with its additional risk reduction characteristics.

Taking the case of the UK I have illustrated above, one of the ongoing attractions for investors is that alternative lending offers them a route to exposure to the economy at a granular level. Investors have woken up to the differences in behaviour from SMEs depending on their location: there are differences between a portfolio of loans in the US compared with, say, France. This provides bigger international investors with the scope to manage their overall private debt on a geographical basis or by sector of the economy.

In terms of overall portfolio modelling, alternative lending can assist with reducing the annualised volatility while also raising the overall return, particularly if the allocation is made from the fixed income part of a portfolio. 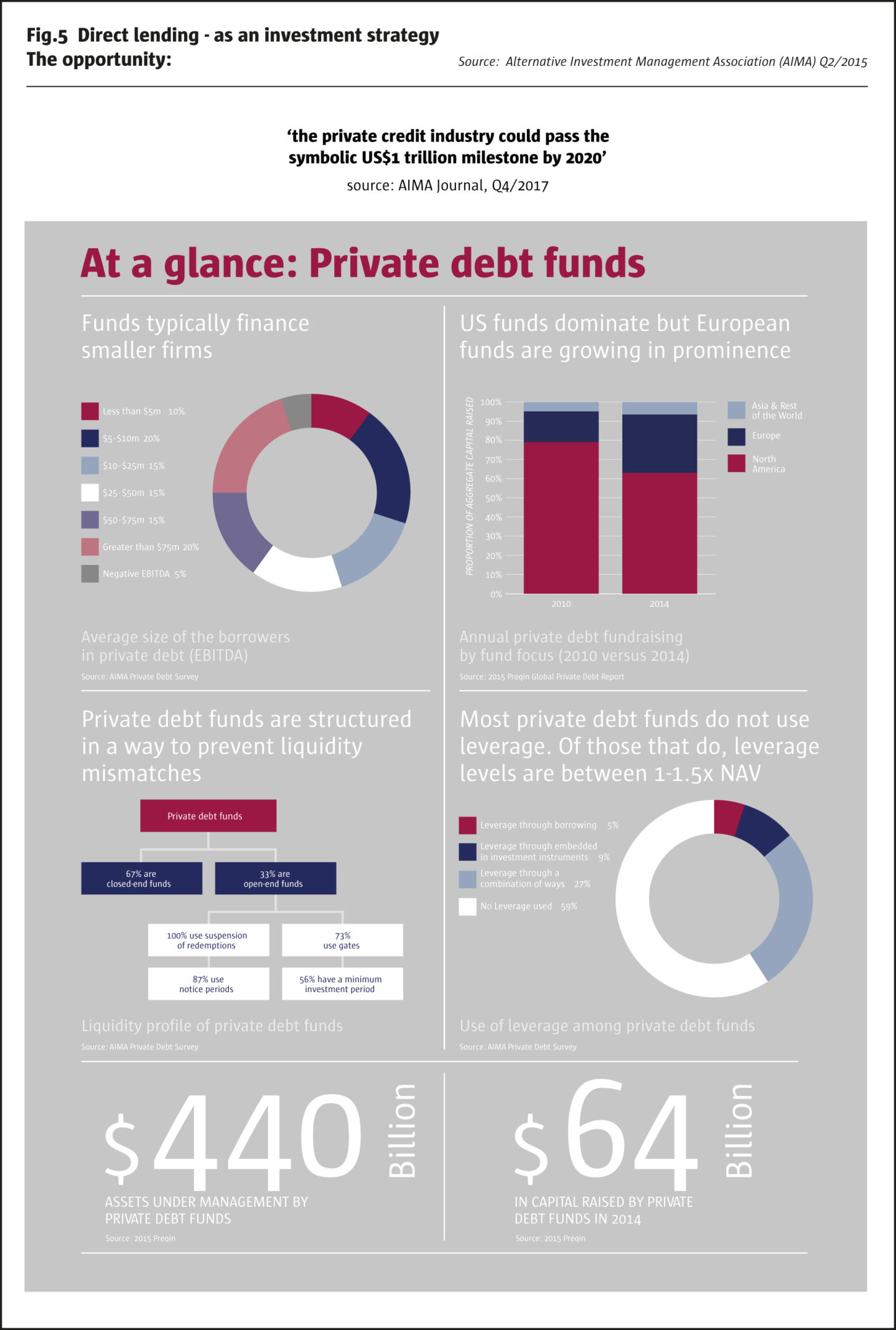 Private debt is becoming a mainstream asset class. Institutional investors have indicated their willingness to allocate to it and they are embracing it wholeheartedly. According to Preqin, there are now over 3000 institutional investors allocating to private debt globally, up 27% from last year. At Prestige Funds we continue to see significant interest in UK-directed lending from across the global investor base, from wealth managers and IFAs through to sovereign wealth funds. We don’t expect the banks to return to this market for a range of reasons cited above. It means private debt providers will have an important role to play for some time to come.

Private debt is also playing a more critical role than ever before within the UK economy. Britain is more reliant on its SMEs for employment and productivity at a time when traditional forms of lending are evaporating. Prestige is just one of a number of specialist private lending fund operations in Europe, and we have not seen a wider opportunity set than we see today within the industries we are focused on, such as agriculture, construction, engineering, manufacturing, renewable energy and many other old economy sectors. 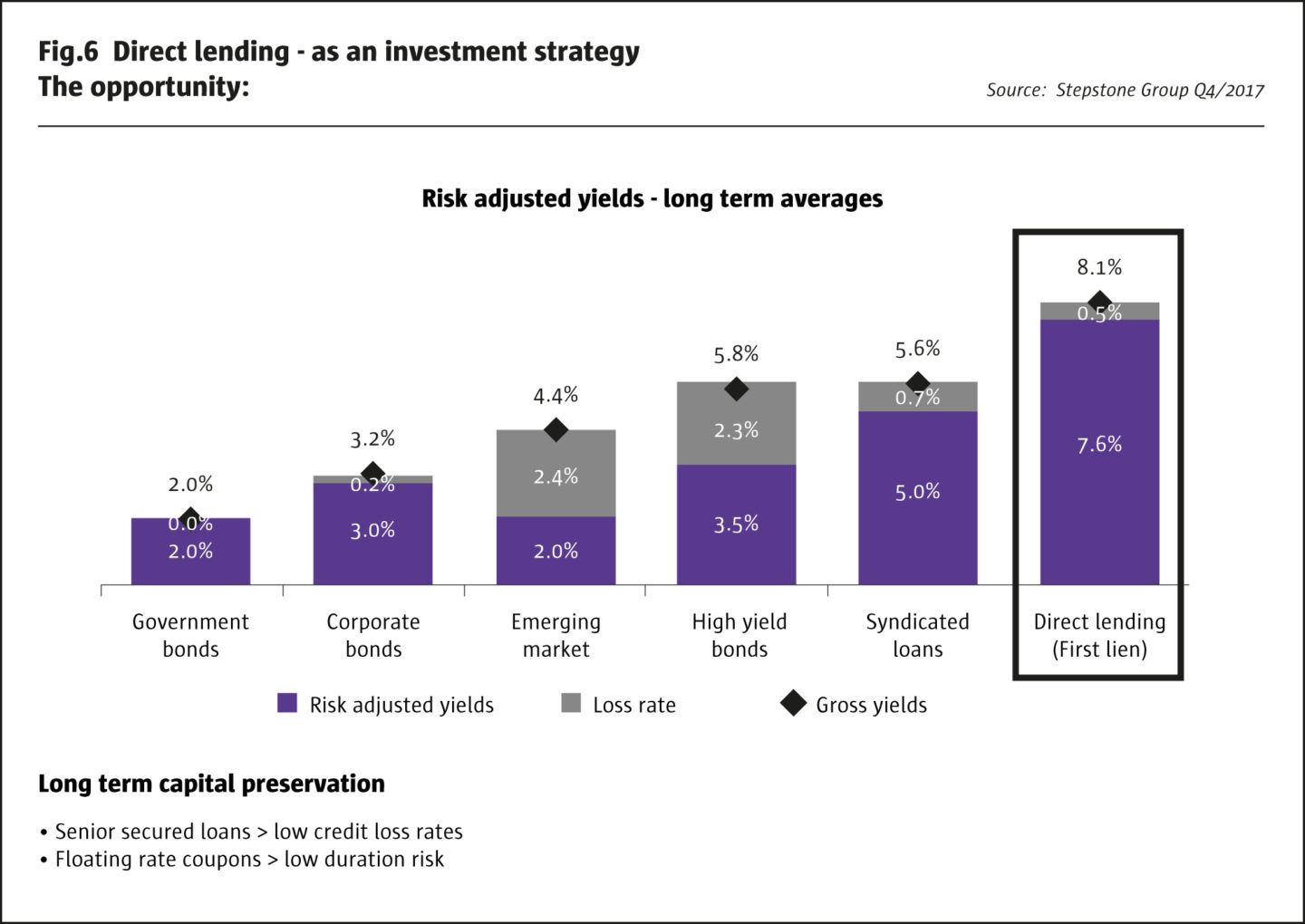