When will it hit bottom?

It’s been a rough seven years or so for the euro (EUR). Since the end of 2012, EUR has fallen 17% versus the US dollar (USD). As bad as that is, it’s much better than the Swedish krona (SEK), which, over the same period, slid 21% versus EUR and 34% versus USD. SEK hasn’t traded this low versus EUR since the depths of the financial crisis in early 2009 (Fig.1). Currently, SEKEUR is about 15% below its average level of the past two decades since EUR came into existence. 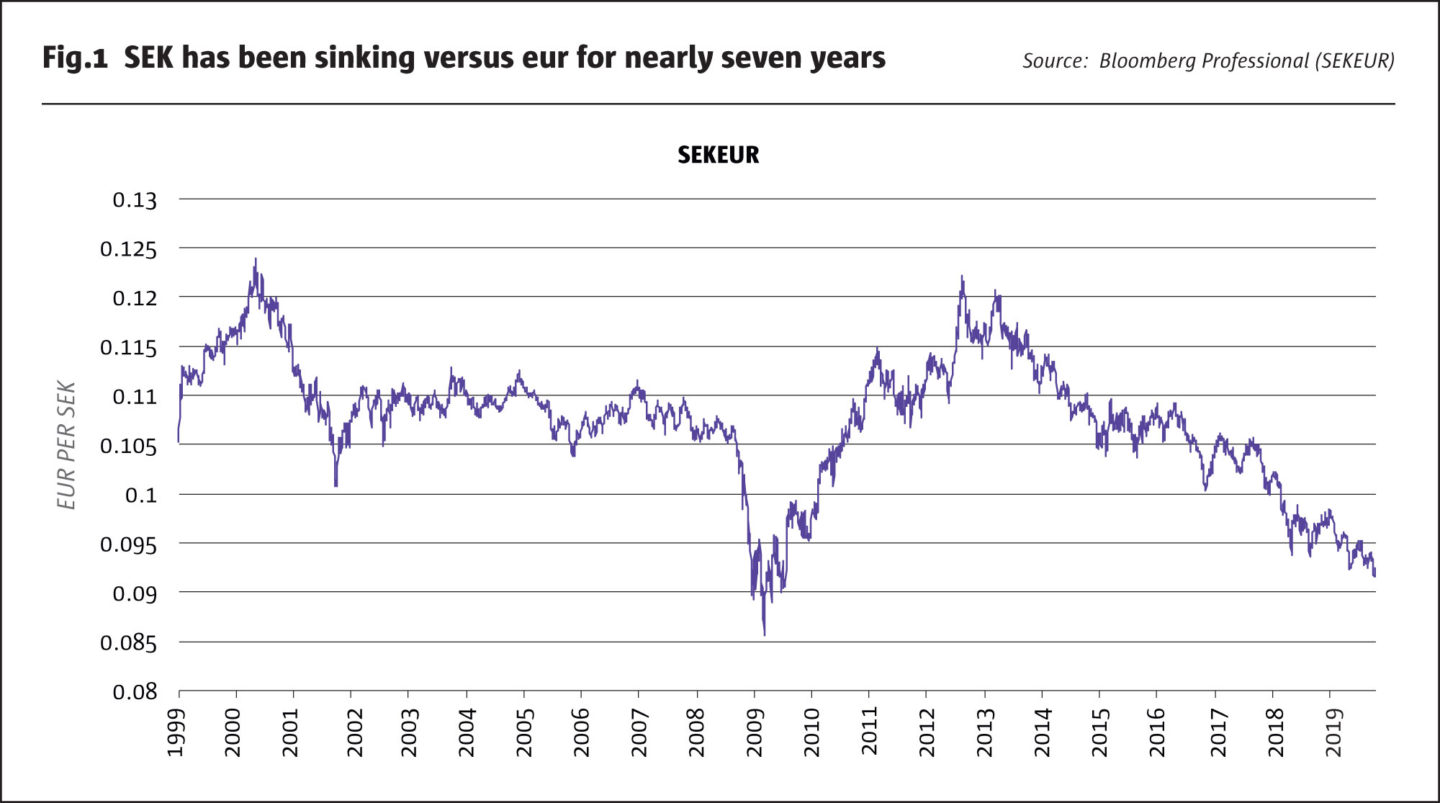 Superficially, Sweden’s economy looks similar to that of the eurozone. Both the Riksbank and the European Central Bank (ECB) had dabbled with negative deposit rates (Fig.2). The negative deposit rates haven’t improved the pace of economic growth in either case. Swedish and eurozone GDP growth rates have been similar since 2016 and both Sweden and eurozone growth has weakened recently (Fig.3). 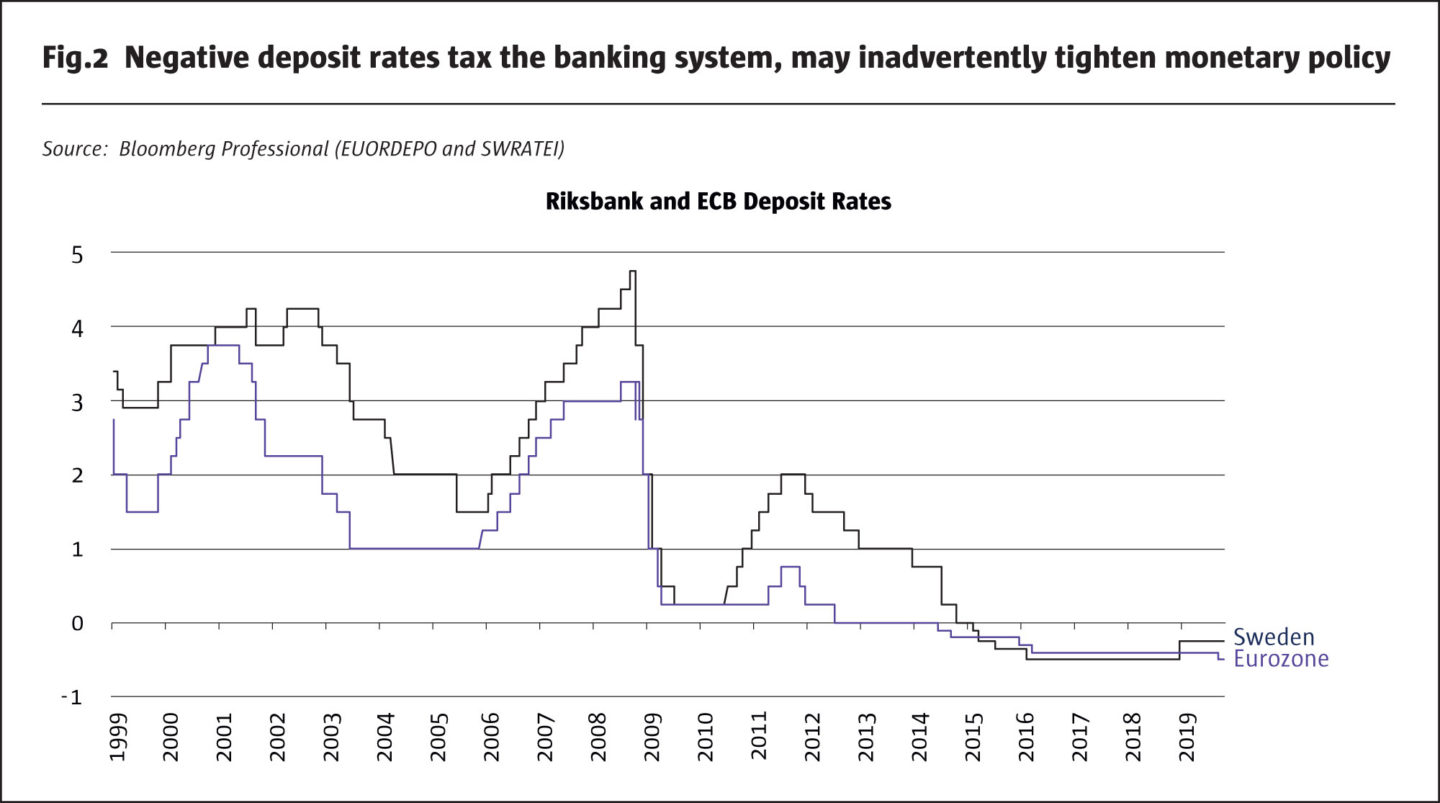 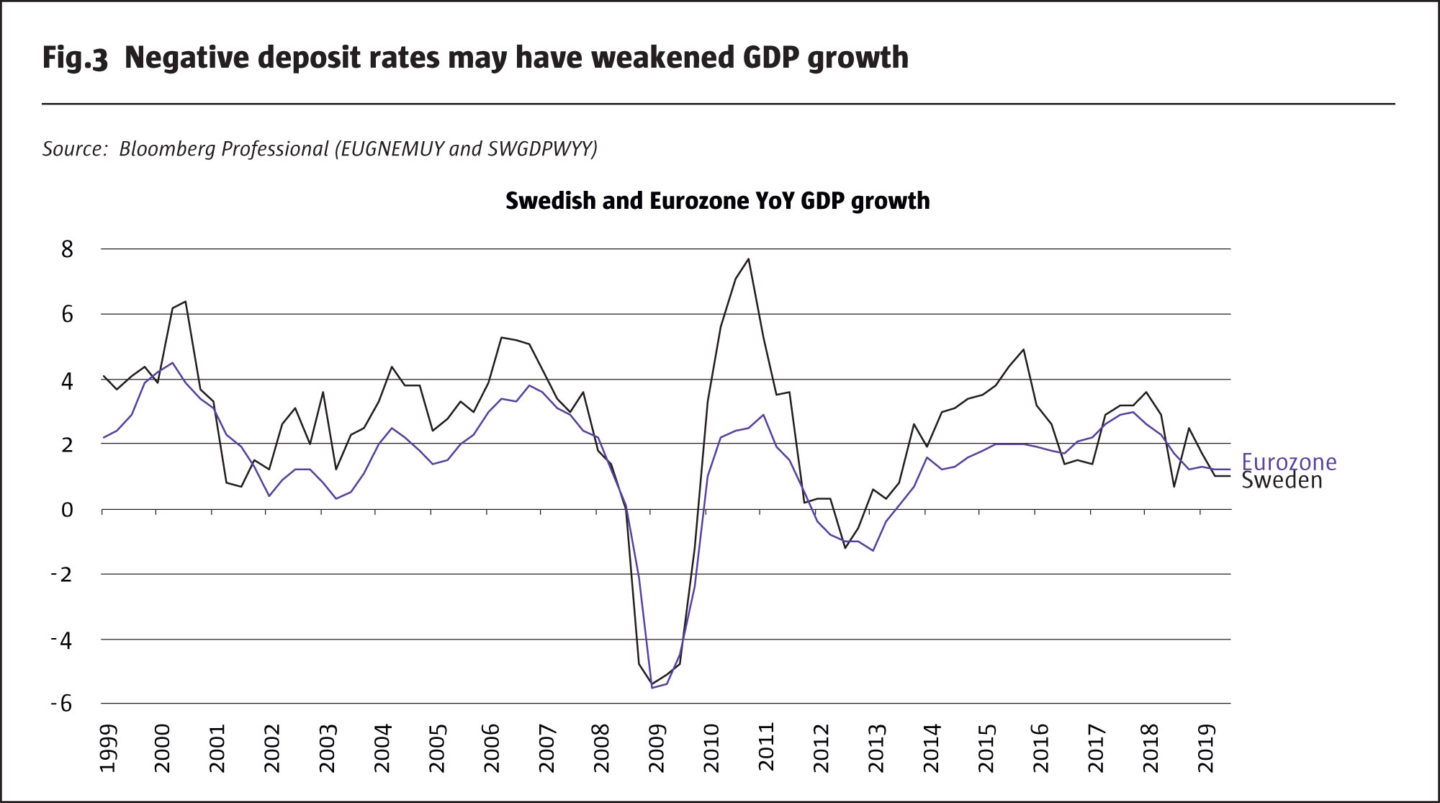 Swedish and eurozone data diverge a bit when it comes to unemployment and inflation. Eurozone unemployment has been falling at a much steadier pace than Sweden’s, though, in fairness, it also began from a much higher level. What’s especially alarming for Sweden, and for SEK, in the near term is that Sweden’s unemployment rate began to soar over the summer, spiking higher in July and August while eurozone unemployment continued to fall (Fig.4). This hasn’t been reflected yet in Sweden’s GDP data for Q3, which isn’t scheduled for release until November 29. When that number comes out, there is a significant risk of a negative print. If Sweden’s economy is already in a recession, it could provoke further near-term weakening of SEKEUR. 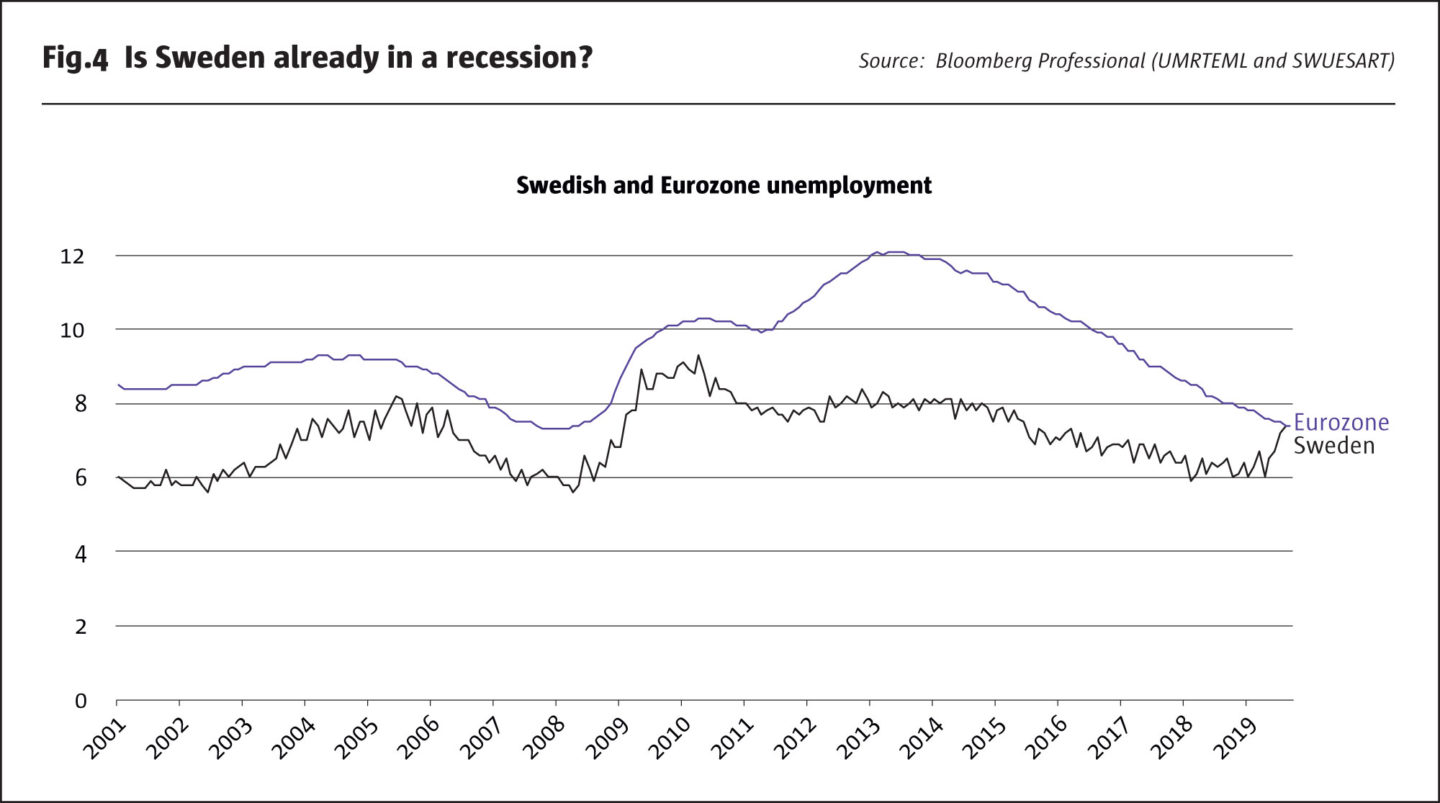 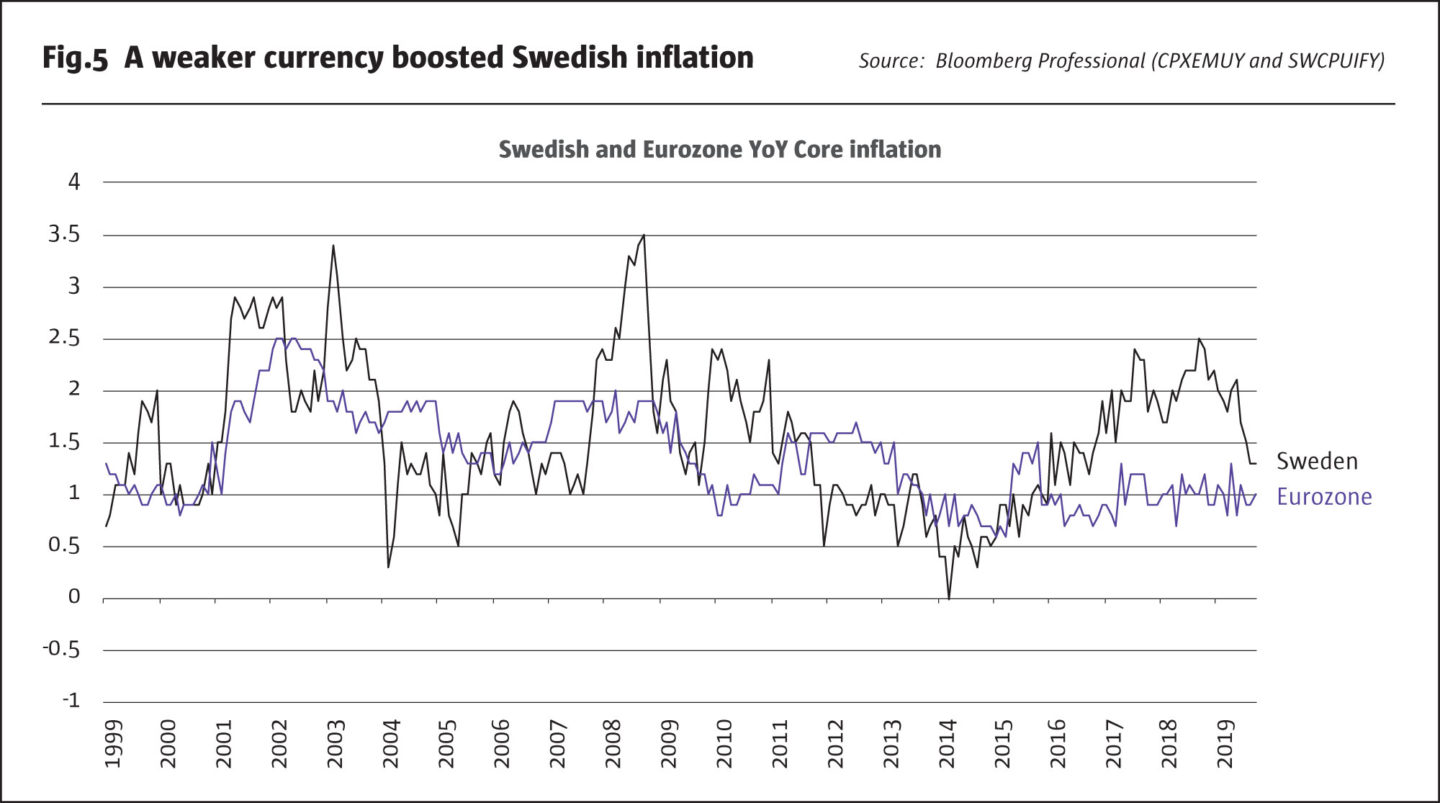 For example, when Japan went to negative deposit rates in January 2016, the yen stopped weakening and began to strengthen. EUR weakened as the ECB went first to -0.1% and then to -0.2% deposit rates. Then as the ECB went to -0.3% and -0.4% rates trade weighted EUR soared. Trade weighted EUR has shown little response to the latest move to -0.5% deposit rates. If going more deeply negative in terms of deposit rates strengthens a currency, then it’s a small leap to imagine that raising rates back towards zero might weaken the currency and spur lending. Welcome to the bizarre world of negative rates.

So, if central bank policy, GDP growth, unemployment and inflation don’t explain why SEK has weakened, what does? The answer seems to come down to one word: trade. Sweden is losing competitiveness. SEK’s weakening versus EUR appears to have a lot to do with shrinking Swedish trade surpluses (from 7.5% to 3.5% of GDP) at the same time as the eurozone has gone from small trade deficits to surpluses of nearly 3% of GDP (Fig.6). 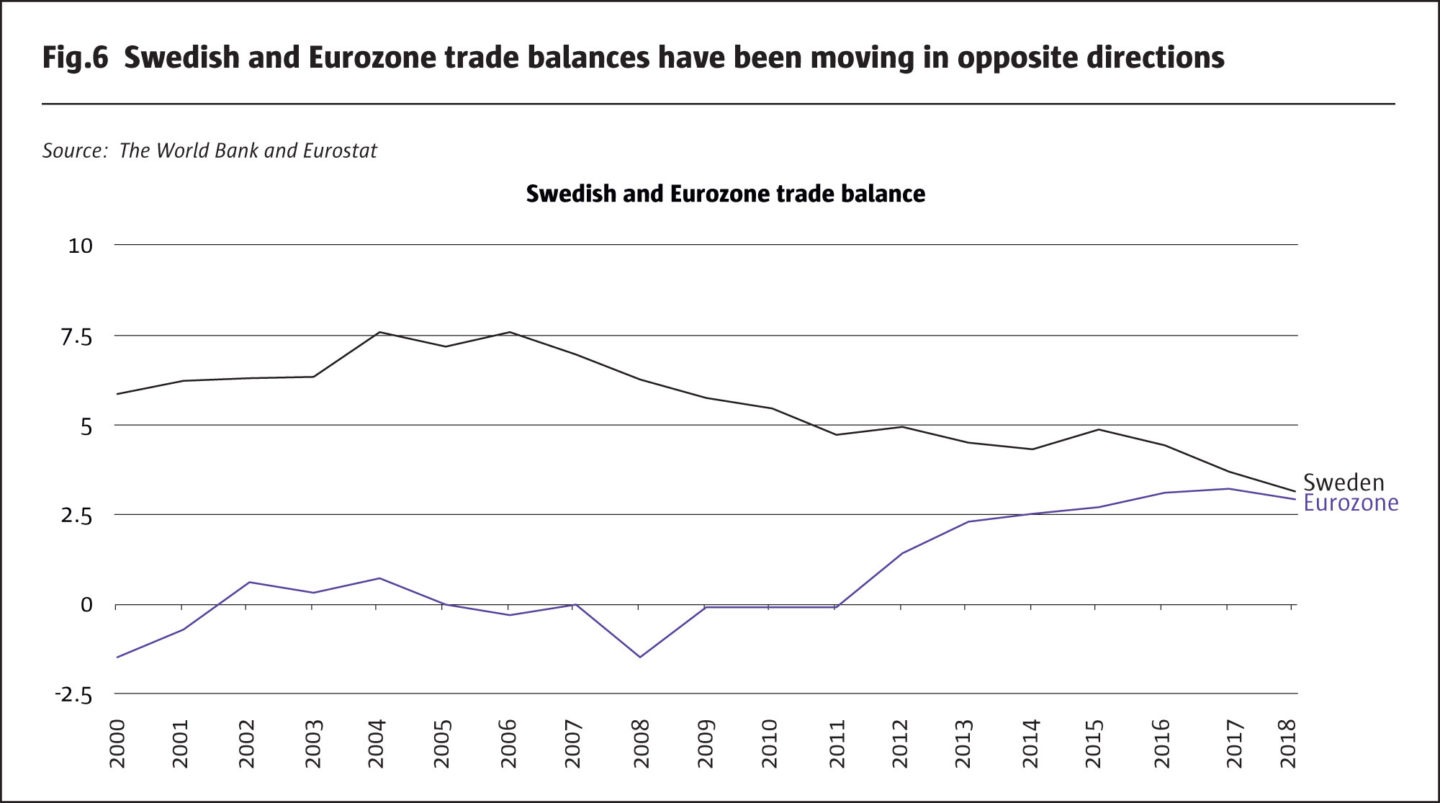 What’s especially disturbing for Sweden is that a weaker currency hasn’t prevented a shrinking of its trade surplus. In the short term, of course, a weaker currency can expand the trade deficit by raising import costs faster than its spurs export growth. The problem, though, is that SEK’s decline isn’t short-term: it’s been going on for nearly seven years and Sweden’s terms of trade have worsened anyway.

So, if one must sum up all of SEK’s weakness in one word, that would be trade. However, if given a second word, that word would be housing. The real value of Swedish home prices cratered twice previously: once in the early 1980s and again in the early 1990s. In both cases, SEK plunged versus USD. Swedish real estate prices hit a snag in 2008 and the currency also weakened a fair amount then, too. Swedish property prices peaked in 2016 and have begun to fall a bit since then (Fig.7). This has probably compounded SEK’s woes, especially given the substantial outstanding mortgage debt in the country. 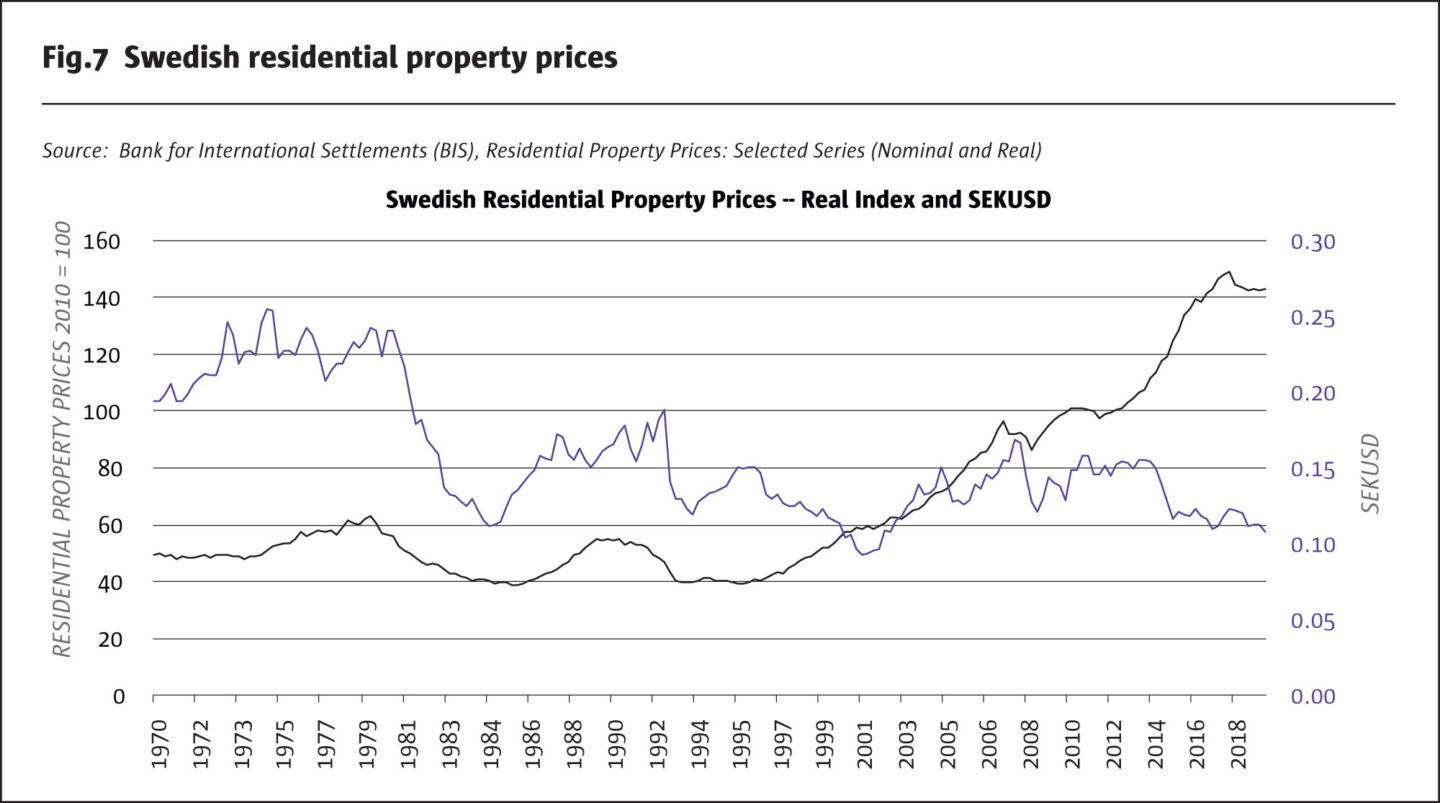 Swedish household debt accounts for 88% of GDP, well above the 58% average across the eurozone and 75% in the US. While Swedish household debt levels are high, they pale in comparison to the 119% in Australia and 100% of GDP in Canada. It should be noted, however, that the Australian and Canadian dollars have also been exceptionally weak currencies in their own right in recent years. Also, Sweden’s household debt are also much lower than in the US pre-crisis when it totaled as much as 98% of GDP in late 2007.

As such, Sweden is probably not on the verge of a financial crisis. That said, any sharp decline in real estate values that impairs the value of the collateral behind mortgage loans would be an unwelcome development. With slow population growth, an ageing population and a retiring baby boom, it’s not abundantly clear what would cause Swedish real estate prices to resume their upward trek. Moreover, falling interest rates, which is probably the main reason why real estate prices soared in Sweden in the first place, has probably run its course.

Elsewhere, Sweden also has extremely high corporate debt relative to GDP. The good news here is that GDP probably isn’t a relevant yardstick by which to measure Swedish corporate debt. Most of that debt is issued by Swedish multinationals and they derive their revenues world-wide. Revenues generated abroad can help them service those debts but revenues from abroad don’t add to Sweden’s gross domestic product.

Finally, the best piece of news of all for anyone hoping for a stronger SEK: while the Riksbank may be out of traditional ammunition, the Swedish government is not. Swedish government debt is only 36% of GDP – very low compared to the eurozone average of 86% (Fig.8). Even Germany, which least indebted country in the eurozone, has a public debt to GDP ratio of 62%. In the US its 100%. In Japan, its over 200%. As such, Sweden enormous borrowing capacity gives it the ability to slash taxes and raise spending, if needed. In Sweden’s highly open economy, much of the benefits of fiscal stimulus would likely spill over to Sweden’s trading partners but some of those benefits would stay at home. SEKEUR and SEKUSD might hit bottom when Sweden adopts fiscal stimulus. With unemployment rising and an election in 2022, that day might not be too far away. 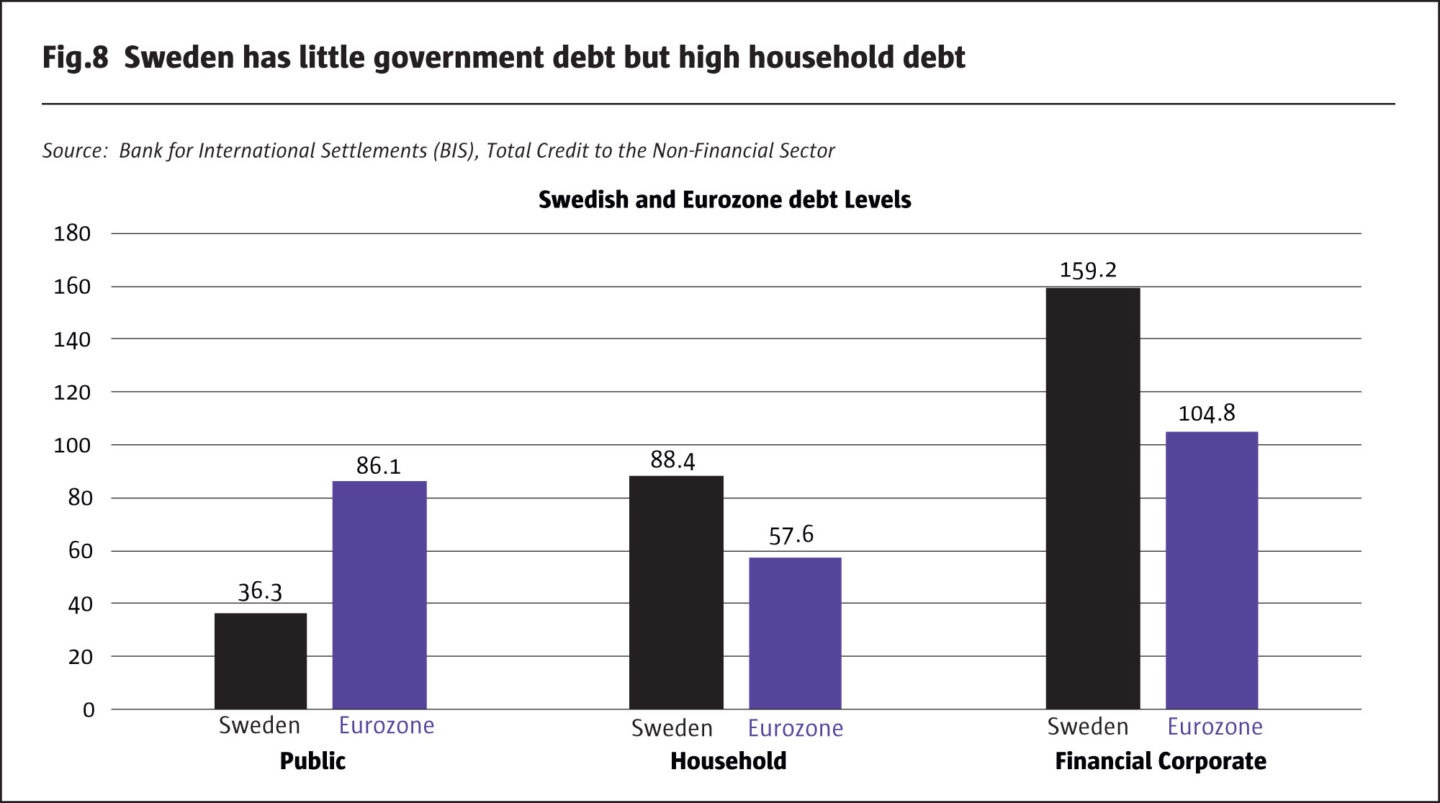 • SEK has fallen versus EUR as terms of trade have weakened.
• Negative deposit rates have not boosted Swedish or eurozone growth.
• SEK is also sensitive to Swedish real estate prices and levels of household debt.
• Sweden has enormous public borrowing capacity and lots of space for fiscal stimulus.