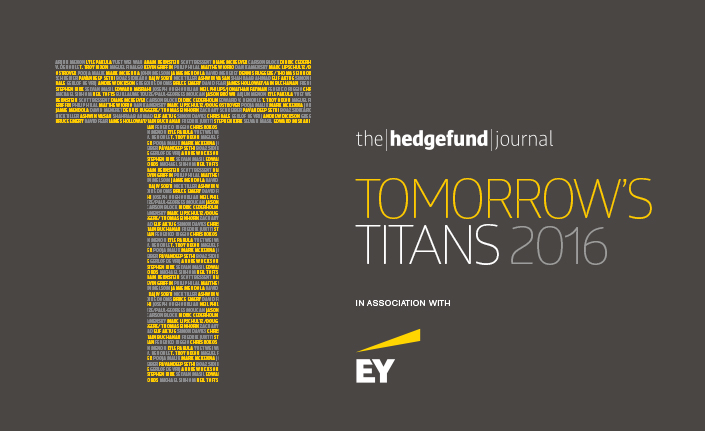 The Hedge Fund Journal’s fourth biennial Tomorrow’s Titans survey, generously sponsored by EY, illuminates a microcosm of a dynamic hedge fund industry that continues to spawn new funds, strategies and management companies. All the names in our 2016 Tomorrow’s Titans survey are new names, meaning they have not featured in our previous surveys in 2014, 2012 or 2010.

Fewer hedge fund launches may be reported if a higher proportion of managers trade sleeves within multi-strategy funds; stay below registration thresholds while building track records; only run managed accounts; or start strategies inside family offices, endowments or pension funds. Many managers doing these things keep a low profile, and also do not feature here for other reasons. We like to see regulatory filings, as some rumoured launches never materialise. Though some funds in this survey have rapidly raised substantial assets, we do not set a hard minimum, partly because some strategies, such as shorter term trading or small cap equities, are inherently less scalable than others. No hard maximum applies to age and we did receive a nomination for a famous physicist who started a fund at the age of 78! In many cases we are aware of strong performance, but not all managers will have reportable i.e. personal, portable, and public track records. Our nominators, who include allocators, brokers, advisers, former colleagues and even friendly competitors, exercise judgment in identifying managers who have potential to become leaders within their strategy. We showcase a broad cross section of managers, who are examples of rising stars rather than an exclusive list. We reiterate the customary disclaimer that many nominations received are worthy of inclusion.

If fewer launches partly reflect a diminished number of dedicated hedge fund seeders, including regulation-hampered banks, day one asset numbers may not always be huge. Seeders, or day one investors, in this survey include Blackstone, GCM Grosvenor, Old Mutual Wealth, KKR and Protégé Partners. But some managers have swiftly multiplied their assets within years – or even months – of launching. Managers are well aware that the rise of liquid alternatives has seen UCITS assets grow faster than offshore fund assets in recent years. Platforms, including those of Lyxor, MontLake, UBP, and Rothschild, are raising assets, and some managers have gathered most, or even all, of their assets via these and other platforms.

A smaller number have come from endowments (e.g. Harvard), pension funds (e.g. APG) or family offices (e.g. Duquesne, Point72, Soros, ZBI) and some may be essentially external family, or multi-family, offices. Predictably, given investment banks’ retreat from proprietary trading, only a handful of more recent launches came from banks (e.g. BAML, Deutsche Bank, Goldman Sachs, UBS). Some 43 of the 50 have set up their own management companies while seven have launched funds and/or grown their careers within larger organisations (e.g. BlackRock, Highbridge, Kairos, Och Ziff, Pelham, Pictet and Systematica).

The above broadly applied to previous Titans surveys but a few new trends are evident in this one. Hedge fund managers have, for some years, been quietly running separate accounts for specific clients using Environmental, Social and Governance (ESG) criteria, yet very seldom branding as ESG investors. Now some funds, including Nick Tiller’s Precocity, are starting to clearly state that ESG enters their process. The growing proportion of inflows coming from pension funds with ESG policies may explain more public utterances on ESG. For instance, Europe’s largest pension fund, APG of the Netherlands, which has around $25 billion invested in hedge funds, avoids investments in cluster bombs. Other pensions have more extensive and prescriptive ESG policies.
The ‘G’ in ESG, namely governance, has of course been the province of activist hedge funds for decades. Activism is most visible in the US, where at least three of our 2016 names, Diane McKeever, Carson Block and Didric Cederholm, pursue some activism. Activists are increasingly emboldened by successes in Europe. Southern Europe in particular offers great scope to improve corporate governance, and Joseph Oughourlian is a respected player in the region.

This survey contains only four women, partly because many nominations we received had already appeared in the previous three Tomorrow’s Titans surveys or the four biennial 50 Leading Women In Hedge Funds surveys. Whilst we regret not having more women in the survey, in percentage terms 8% is above the proportion of women portfolio managers in the industry. The 2015 paper The Performance of Female Hedge Fund Managers, by Rajesh Aggarwal and Nicole M. Boyson, (who is ex-EY) identified 439 funds with at least one female portfolio manager against 9,081 with male managers, between 1994 and 2013, but not all of these funds survived. The paper concluded that male and female portfolio managers perform no differently, but women have more difficulty raising assets. Indeed, several of the female nominations we received in early 2016, had liquidated funds a few months later. In 2017, we expect to feature more women portfolio managers in our 50 Leading Women in Hedge Funds survey (which will also include non-investment professionals).

As hedge funds are ‘the new banks’ we received many nominations for those doing direct lending, and the survey includes two managers, MGG Investment Group and Owl Rock Capital Advisors, in the space. Some in the hedge fund industry have high hopes that banks’ support for early stage hedge funds could be revived if the new US administration repeals the Volcker Rule, while rolling back Dodd Frank could reduce regulatory burdens. If the regulatory pendulum swings back, the numbers of hedge fund launches could perk up.

EY is pleased to congratulate the fifty leaders being recognized as The Hedge Fund Journal’s Tomorrow’s Titans. As the industry continues to explore innovative growth opportunities, EY remains committed to helping hedge funds around the world build new strategies and products, and develop distribution networks and channels in which they have traditionally not been engaged.

As a leading global service provider to the industry, we have helped many firms develop from start-ups to some of the largest players in the financial community. Our dedicated team of hedge fund professionals is proud to provide tax services to approximately half of the top 100 Global Billion Dollar Club hedge funds and to audit approximately 40 percent of these institutions. EY is also proud to audit approximately 40% of the top 50 European and top 10 Asian funds. This depth of experience gives us a unique view of the new challenges facing fund managers, along with the ability to quickly provide innovative guidance that firms need.

Looking over the list of Tomorrow’s Titans, we are confident in the talent that is emerging across the globe. EY looks forward to collaborating closely with Tomorrow’s Titans and their colleagues for many years to come.

Getting back to a steady-state growth equilibrium

Impact of Covid-19 on the Senior Managers and Certification Regime

Unfortunately, My CTA Was Diversified!