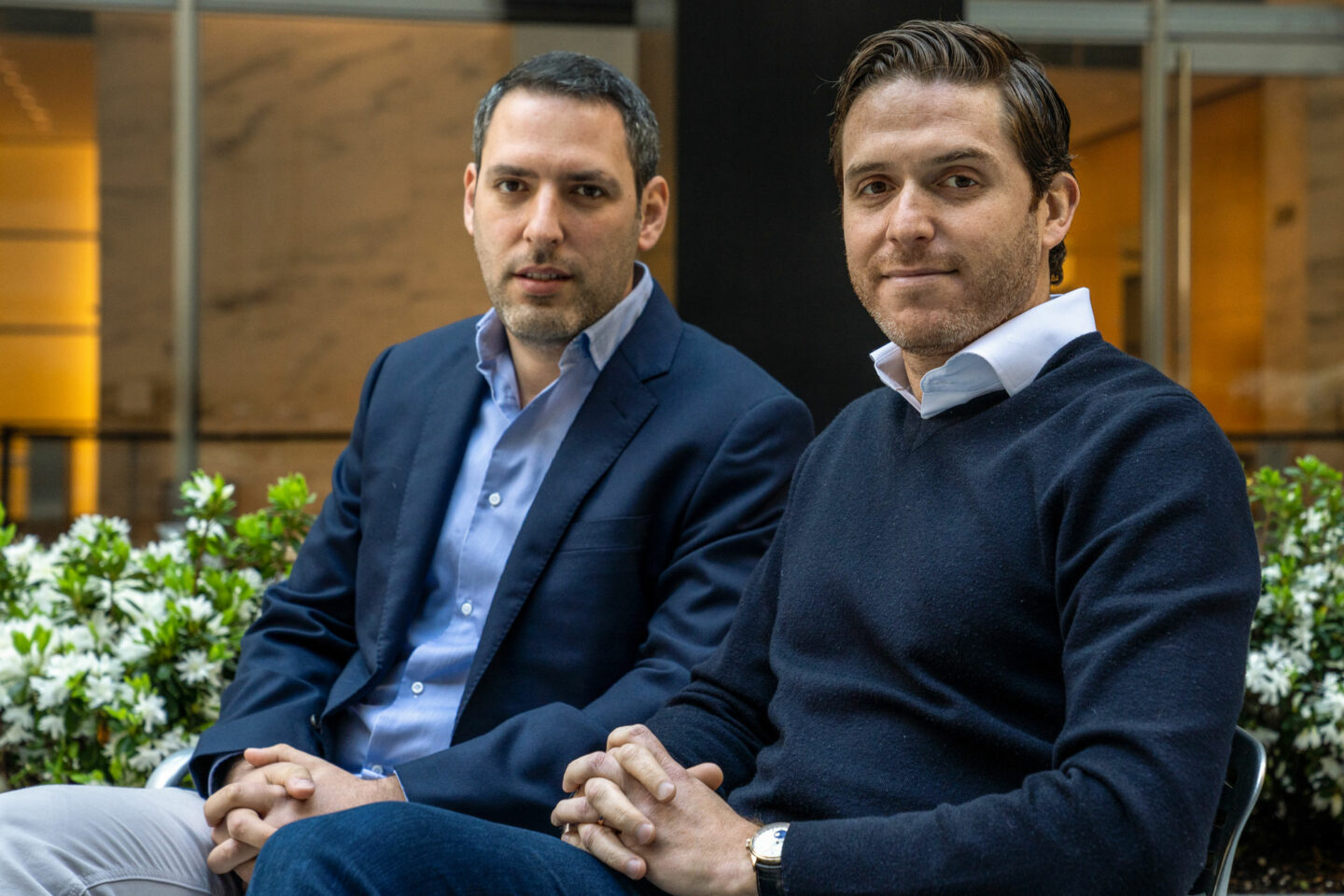 Back in 2016, while Ian Lieberman and Andrew Fruchter were attending a MIT university symposium on artificial intelligence and machine learning which was targeted for academics and professionals in the technology space, unbeknown to each other the duo showed up and were sitting next to each other as they began networking with experts in the space. At that point it became clear their investment process and philosophy were in sync with each other.

Fast forward to today, and they are partners at Nymeria where their highly selective investment process focuses on identifying themes and positions that best express their views, using a deep fundamental research process drawing on their overlapping history, personal investing experience, and broader intellectual curiosity. They have known each other for over 16 years and see eye to eye on the investment process having collaborated on many investment ideas over the course of their careers – PayPal post spinoff from eBay, Micron below ten dollars a share, Broadcom, and many others.

We have a culture that encourages each individual to think creatively and dynamically.

They are animated advocates for technology, such as how technological progress in the cloud, social media, and remote working made society and the economy more resilient amid the pandemic. However, this does not translate into a volatile or high beta style – and Nymeria is also very different from most lower beta funds.

Nymeria combines low beta and moderate factor exposures with a high conviction focused portfolio of long-term holdings, comprised of many smaller and less crowded names. These investments are identified through deep fundamental research tapping into different sources of intelligence including networks in Asia, venture capital and the tech industry. Nymeria also employs strong, derivatives-savvy risk management in order to drive rigour not just on the position entrance, but also on its exit.

The strategy is backed by Robert Citrone’s Discovery Capital Management. The strong relationship has come with many benefits of working together, bridging fundamental with macro views, and providing all of the business, risk and operational support so they can focus on managing their portfolio.

The long-term and annualized return target, through the cycle, was surpassed in 2020 and the strategy held steady amid the broad equity rout in the first quarter, and the technology sector setback seen in the third quarter, while profiting during the violent shift from growth to value seen in the fourth quarter. During these months of heightened volatility, Nymeria‘s volatility decoupled from that of the market’s and remained at structurally lower levels. In fact, their volatility in September was completely unchanged month over month despite market volatility nearly doubling. This is just one example of the output from a fundamentally driven investment process, with a sharp focus on risk management.

While Nymeria are fundamental investors, they are fundamental investors who will run the portfolio while being factor aware. Their Q3 investor letter stated that, “In a modern market we believe ignoring factors, especially in moments of extremis, is tantamount to burying your head in the sand. As such, in early September we determined our crowding factor to be too high putting the portfolio at risk in the event of a broad market selloff. We addressed this by reducing and hedging part of the factor exposure”.

Whereas some TMT managers have a clear bias to the growth factor, Nymeria’s performance attribution shows low sensitivity to traditional factors like value, momentum and growth as well as other transient, but impactful factors such as “work from home” and “recovery”.

In 20 years’ time our most important legacy will be generating quality returns for our partners where people find it a great place to work.

The low factor sensitivity is partly explained by Nymeria viewing growth versus value as a false dichotomy – and identifying stocks with multiple factor exposures. Their investment in Eventbrite was viewed as one with both a recovery factor exposure that is often correlated with how value stocks trade, while also clearly having a growth factor exposure due to the tremendous potential trajectory of their business in the coming years between online events and the recovery of physical events.

Nymeria’s sensitivity to the crowding factor is low, but also more nuanced. As fundamental investors, the crowding factor does not determine whether they enter or exit a position. That being said, it does inform their sizing and timing, which would require them to have a thesis that diverges further from consensus in terms of earnings estimates, cycle duration or general outlook.

Thus, idiosyncratic or stock-specific alpha was the main performance driver, with sector and sub-sector selection also helpful. Longs and shorts are underwritten independently and will not be intra-sector pairs by design. Their investment universe includes over six hundred TMT companies globally, meeting liquidity and trading criteria (above $15 million average daily volume). The sharper focus is on 5-6 investment themes at any time, which narrows it down to a smaller watchlist of around 15-20 ideas per thematic framework or 100-120 companies at any given time.

Ian Lieberman previously worked for Discovery Capital Management founder and Tiger cub Robert Citrone, who was a key mentor to him. The Tiger style process is highlighted in many different pieces in their investment process – duration, concentration, and deep primary fundamental research. Similarly, Andrew Fruchter, grew his investment acumen by working with Morris Mark, founder of Mark Asset Management, a deep-rooted research organization.

Alertness to how nascent Covid-19 was impacting Asian supply chains (as well as European demand levels) informed some timely adjustments on their long and short investments in early 2020, and this partly leverages Lieberman’s extensive network in Asia. Lieberman has visited factories and met with management teams in China, Japan, Korea and Taiwan multiple times a year for many years now. This has led the strategy to invest both long and short in off the beaten path opportunities such as Renesas Electronics, Comba Telecom System Holdings, Murata Manufacturing, Walsin Technology Corp, MediaTek, and Lasertec. In 2014, Fruchter also spent time in Hong Kong and Beijing as he earned a MS in Global Finance through NYU Stern and Hong Kong University of Science and Technology. Being on the ground in Hong Kong and Beijing allowed him at the time to take advantage of grassroots research on existing names his fund was invested in such as Yum Brands in China and Wynn Macau.

While Nymeria are public investors, smaller and earlier stage companies in the private space are also followed as private equity and venture capital investors are another historical and ongoing influence. Fruchter has personally invested directly into private technology companies since 2006. Nymeria keeps in touch with the venture capital community and industry experts across the globe to have an ongoing dialogue on emerging trends in the space.

Nymeria does not cross over into private market investing nor do they invest pre-IPO as the portfolio is fully liquid, but trends in unlisted companies feed into their analysis of public companies, which can also be very innovative: “We look to bridge knowledge between private markets and public markets to work out who is disrupting whom and the new emerging trends we should be paying attention to,” says Fruchter.

Semiconductors: an early and long-term call

Nymeria’s contrarian views on semiconductors started out ahead of the curve in mid-2020 and in early 2021 their views remain non-consensus in expecting the cycle to persist for longer. Back in June 2020 the world seemed very bleak, but Nymeria saw a golden era for semiconductor memory chips as going into Covid-19 the industry had very low inventory after a destocking cycle, and this fell further after the ecosystem – much of which is in China – was disrupted. Meanwhile cyclical and secular drivers were behind huge restocking demand from computers, webcams, cellphones, iPads and autos given the public transport issues. Secular drivers included electric vehicles, AI and machine learning inference datasets. This was a true V-shaped bottom for demand. Semis were their biggest P&L contribution in 2020.

Per their 4Q investor letter, “For reasons we have now argued throughout this letter, we would suggest we are still in the middle of this cycle. We have moved our exposure to investments that are experiencing only the first stages of “tightness” such as Sumco (Japan), Micron, and Samsung (Korea), or in the case of Microchip are levered to broad based recovery with a capital allocation story on the come”.

Nymeria remains bullish while other investors fear semiconductors are peaking based on historical relationships with metrics such as PMIs, but this cycle is different. There have also been freak events impinging on supply, such as power cuts in Texas and earthquakes and fires in Japan. Meanwhile automakers and other end customers should raise inventories to levels not seen in 30 years if not more, which could further elongate the cycle. This illustrates time arbitrage as Nymeria highlights one of their many differentiators. While many investors have a sightline measured in days or weeks, Nymeria takes a longer-term view on longs. Nymeria’s duration profile is again evident in their largest position [Sumco], a Japanese maker of bare wafers used in the semiconductor manufacturing process. “Consolidation of the industry from five to four players should increase pricing power, for several years, and it takes two years to add more capacity. With limited industry supply intentions and the explosion of demand for bare wafers to feed semiconductor demand, we believe we are on the cusp of a powerful multi-year pricing cycle that should serve to drive tremendous upside in the stock,” says Lieberman.

Though Nymeria may take a multi-year view on stocks, they also fine tune their exposures on a shorter-term basis with derivatives. Per their investor presentation, their option overlay over-writing and under-writing strategy – only on a covered basis – helps them exit risk with discipline and rigour and without emotional attachment to winners or thesis creep, while adding to P&L – partly since most options expire out of the money. This option strategy allows them to maintain a larger position as they approach their price target rather than selling prematurely. Occasionally options are also used to get more upside in catalyst driven situations.

A great place to work

They are building the culture from the ground up, with a research-oriented process that brings on people who are passionate about the space, seek out opportunities with fervor and are excited to come into work, and be at the precipice of change in TMT. The world is constantly evolving, and strategies need to evolve. “We have a culture that encourages each individual to think creatively and dynamically, allowing us to constantly adjust our thinking to the environment, not just stay within a box,” says Fruchter. “In 20 years’ time our most important legacy will be generating quality returns for our partners where people find it a great place to work,” sums up Lieberman.