Investing with a long-term mindset 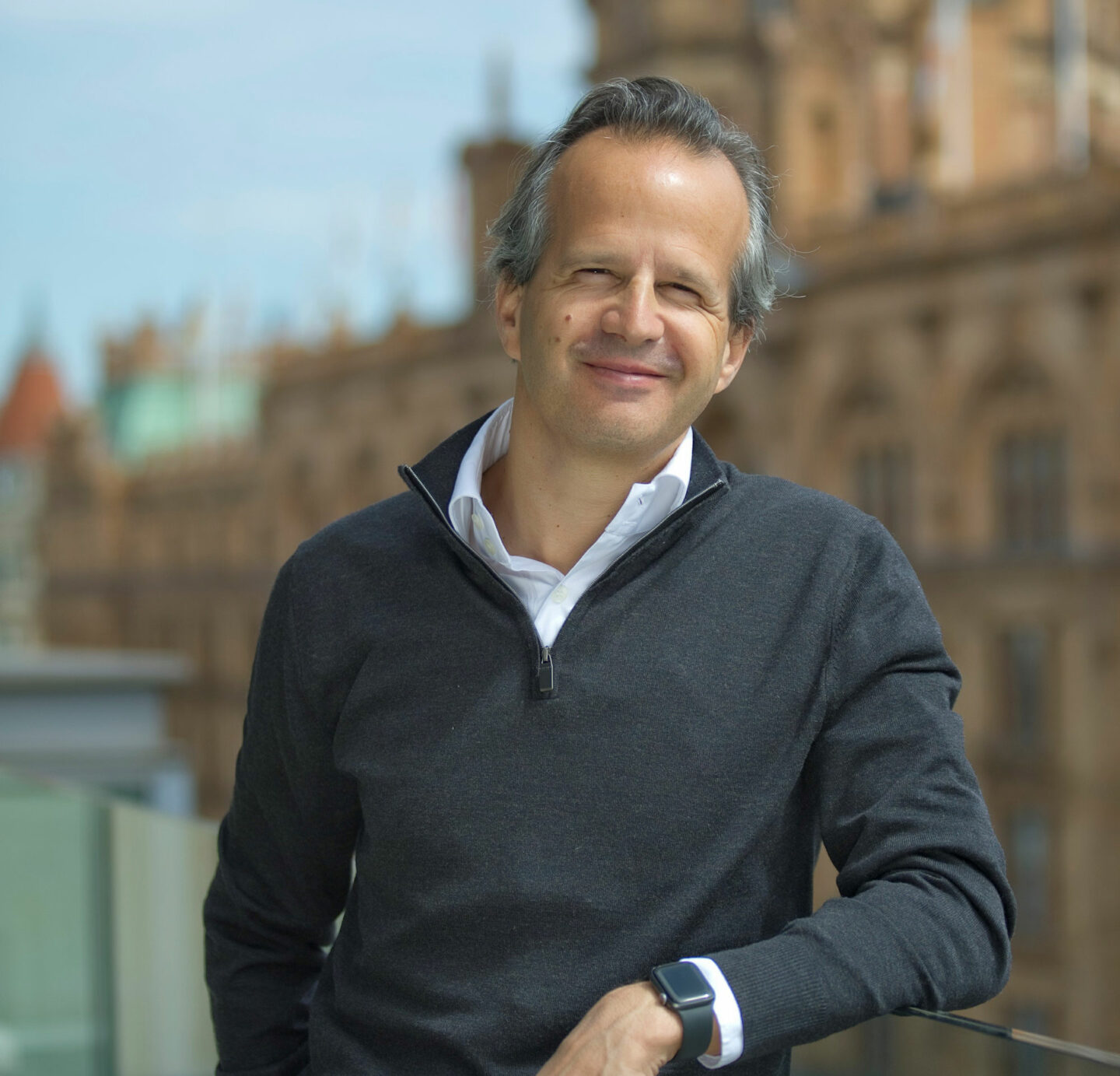 Louis Villa uses the word Ananda as a mantra for his meditation practice and it also speaks to the key ambition of the asset manager: a heaven of calm and serenity in equity markets which change ever more quickly. This made it an obvious choice for the company’s name when Louis Villa and Araceli Strassburger launched the London based company in late 2018. “Some managers seek to outperform by being faster – a task undoubtedly made harder by the rise of algorithms; others by being smarter – and here competition is very intense. We aim to generate alpha by following a simple – but not easy – process: deeply research quality assets that we buy from pessimists and sell to optimists. Not by being quicker, or smarter, but by being calm and maintaining a long-term focus,” says Villa.

With a research driven and bottom-up investment process, Ananda is not scared of making contrarian calls on individual stocks, making the fund generally short the momentum factor. Ananda eschews macro directional calls and therefore more macro-driven sectors, such as banks and energy, but rather favors investing in consumer, industrials, technology, niche financials and healthcare. Ananda invests mainly in European and US equities with a typical 70/30 split, in line with what Villa did first at SAC and then at Moore Capital where he was running a $600 million book.

We aim to generate alpha by following a simple – but not easy – process: deeply research quality assets that we buy from pessimists and sell to optimists.

Ananda’s target is to generate annual alpha of c.5% per turn of leverage through the cycle. This alpha target might seem ambitious, especially considering the large cap focus, but it is consistent with Villa’s career track record in long/short equity over the last 15 years. The team has long-term confidence about their return objectives, but also shorter-term humility: “Looking back, annual alpha performance varied through those years from great to slightly negative. Trust me, we worked equally hard in both cases. Sadly, one can only control the process, not the outcome,” says Villa.

This alpha, coupled with a gross exposure ranging from 250% to 320%, should translate into mid-teens annual outperformance. The net market exposure has been kept fixed ever since the launch of the flagship strategy, Ananda Long Term Opportunities (ALTO), as Villa does not believe he can time the market. In fact, he does not believe anyone can, at least not in a consistent and repeatable way.

By adding hefty alpha to moderate beta, Villa aims to compound around 15% over the long-term, a target the team has substantially exceeded since launch. “The last two years have been very testing, with dramatic news-flow and volatility. Through that period most of the alpha has come from longs. It will not always be the case, but compounding and human ingenuity work heavily in favor of longs. Whereas the asymmetrical limited upside and unlimited downside make shorting inherently more difficult. To avoid being in shorts we do not like or being too big in shorts that we do, the team uses indices to complement single stocks,” explains Villa. Shorts are sized smaller, but Ananda still devotes a big research effort to seek out fundamentally challenged companies and sectors, over-leveraged firms, those going ex-growth, or those with over-optimistic or deceptive management teams.

Since inception (April 2019 to April 2021), ALTO’s L share class (with 2% management fee), has annualized 31% versus 14% for its equity market benchmark (which is composed of 30% US and 70% European equities), exceeding significantly their alpha target. “The extraordinary events of the last two years have provided plenty of opportunities for a contrarian and fundamental research team. It has been a good period for the calm crowd. To be fair, I suspect there will be plenty more drama in the years to come as extreme central banks policies and rising political volatility create a very fruitful environment for our strategy,” says Villa.

Helping Villa manage the research process is co-founder and Head of Research, Araceli Strassburger. Previously a Managing Director at UBS where she spent 18 years, Strassburger met Villa early in her career whilst a research analyst. The two have developed a deep and trusting relationship spanning more than 15 years.

Ananda’s research process blends quantitative scoring together with old school human qualitative analysis. On the quantitative side, the team focuses on return on capital, balance sheet quality, and margin volatility. The qualitative side focuses on identifying disruption risks, judging alignment of interests, and ability to allocate capital. The team of three additional analysts meets management teams, competitors, and experts, conducting in-depth due diligence. The result of this effort is a dream list of close to 200 “Forever” stocks, assets the team would love to hold for decades. A few examples are found in Ananda’s Heroes newsletter on its website, which identifies key influences as including Fiat’s Sergio Marchionne; Bruno Cucinelli of the eponymous firm; Constellation Software’s Mark Leonard, and Berkshire Hathaway’s Warren Buffet.

Villa has invested in all these companies at various times, but not all the time. “Given our 3 to 5 years investment horizon, we invest our capital in the 30 to 40 most attractively valued assets among our dream list, those which offer the best risk-reward, and where Ananda’s view differs the most from consensus. Quality is non-negotiable, but we are very cognizant of the fact that three years out, the price you pay significantly impacts the return you get,” explains Villa.

A very large majority of Ananda’s long book are names that have been there for the full two years. If the name turnover is remarkably low for a hedge fund, the dollar turnover is higher because the short book turnover is higher, and because Ananda is not scared of trading around names. “Performance attribution since inception has been a healthy balance between the operational excellence of the companies we invest in and dynamic rebalancing of the portfolio,” says Villa. “Market sentiment varies greatly, and the last 10 years have shown that the manic-depressive aptly described 80 years ago by Benjamin Graham is alive and kicking.”

The hit rate has been very high: Ananda’s internal data show that more than 75% of the longs generated positive alpha since inception, and the fund has posted seven quarters of positive alpha and only one quarter of negative alpha. “As we do not optimize for the short-term, and focus on long-term capital preservation, some volatility should be expected. Q1 is a good example of negative alpha. We invest in large caps, high ROCE assets and do not invest in energy, commodities or banks, which rallied along with mid-caps and low returns companies. In this context, we were happy to end the quarter with positive performance,” says Villa.

Though the alpha has by far been the main driver of returns, there are some gentle nuances around styles and factors. Over the years, Villa has found that gauging style and factor exposures is more art than science, but a helpful way of monitoring risk. “The portfolio is broadly style neutral, with a slightly short momentum bias which generally acts as a headwind under normal circumstances but is very helpful in periods of stress or deleveraging.”

Though Ananda’s quantitative screens and quality compounders populating the long book might sound like tell-tale growth stocks, in fact, “the style is closer to GARP [growth at a reasonable price] than pure growth, though again there is not a strong bias,” says Villa.

On the ESG front, the best corporate citizens are Ananda’s natural business partners. Villa finds that, “companies that focus on treating their stakeholders in the best possible way tend to outperform in the long-term”. As a result, 2/3rd of the companies comprising the long book are rated top 20% amongst their peers by ESG experts from Sustainalytics.

Creating a good home for their own capital and a place where they would enjoy working was the original ambition driving Villa and Strassburger in creating Ananda. Paying homage to Bridgewater’s Ray Dalio, the team wants meaningful relationships with meaningful people and their own version of radical transparency. “Radical transparency was natural when we started with Araceli. Today, with a team of eight, it is of course more challenging, but we want non-judgmental radical transparency to be at the core of everything we do.” The team is diverse, with two other senior women besides Strassburger (heading investor relations and operations) and multiple nationalities.

Villa defines himself as a constructive bear or a reluctant bull, as central banks’ policies fuel bubbles across asset classes, leaving equities as one of the few reasonably priced. He has discovered through the fundraising process how contrarian the strategy followed by Ananda really is, at least compared to the current attraction of private equity. “Investing in a hedge fund today feels more contrarian than raising a subprime real estate fund in the early 2010s, and trust me, it was contrarian back then,” says Villa who made significant personal investments in Florida subprime real estate, before helping with the creation of NY based Lafayette Real Estate after the Great Financial Crisis. “I suspect returns will be as good or even better this time,” says Villa.

Ananda’s newsletter Debasement sums up the long book with the acronym: LIQRR (Liquid, Inflation protected, Quality equities that are Relatively Reasonably priced). Villa has no strong views on aggregate equity market directions. He would not be surprised if equities returned only average returns over the next decade given the elevated starting point but thinks markets will provide plenty of opportunities for stock picking. Liquidity is important since populism, fiscal instability, and general political volatility will favor the most agile. Inflation protection sounds a must have after 40 years of disinflation. “Inflation may or may not be around the corner, but the asymmetry is clearly the upside”. Quality is sought as a natural part of the research process and because Villa has concerns about “zombie” companies being kept artificially alive with government support. Price matters to maintain a margin of safety and protect capital.

Ananda has just become a full scope AIFM regulated by the FCA but has not yet started marketing in earnest due to Covid. Assets are now at $200 million and were raised from family offices, institutions, and Villa’s extended professional network. He is pleased to have found the right types of clients. “In just over two years, we have been through very volatile markets, and I am glad we have the support of long-term investors. Having the right clients who are aligned with what you are trying to achieve is critical, and we are grateful to every single one of them,” says Villa.