The perils of escalation

Originally published in the April | May 2019 issue

What a difference a weekend makes. Equities closed higher in the first week of May, buoyed by a strong US employment report and hopes that the US and China would finalize a trade deal in Washington this week. Then, on Sunday afternoon (early Monday in China), Washington announced that the 10% tariffs on $200 billion of Chinese goods would increase to 25% on Friday and that 25% tariffs could, perhaps, be applied to an additional $300 billion of Chinese goods. This news sent shockwaves through equity, fixed income, currency and commodity markets.

Our analysis of the impact of the trade war has been pretty much spot on thus far. We estimated that a 10% tariff on $200 billion of goods in addition to higher tariffs on a smaller set of goods would slow China’s economy by about 0.1-0.2%. In fact, according to China’s official GDP estimates, growth has slowed from 6.5% to 6.4%. Fallout from the trade dispute has been limited thus far by a weaker Chinese currency and an easing of Chinese monetary and fiscal policies. 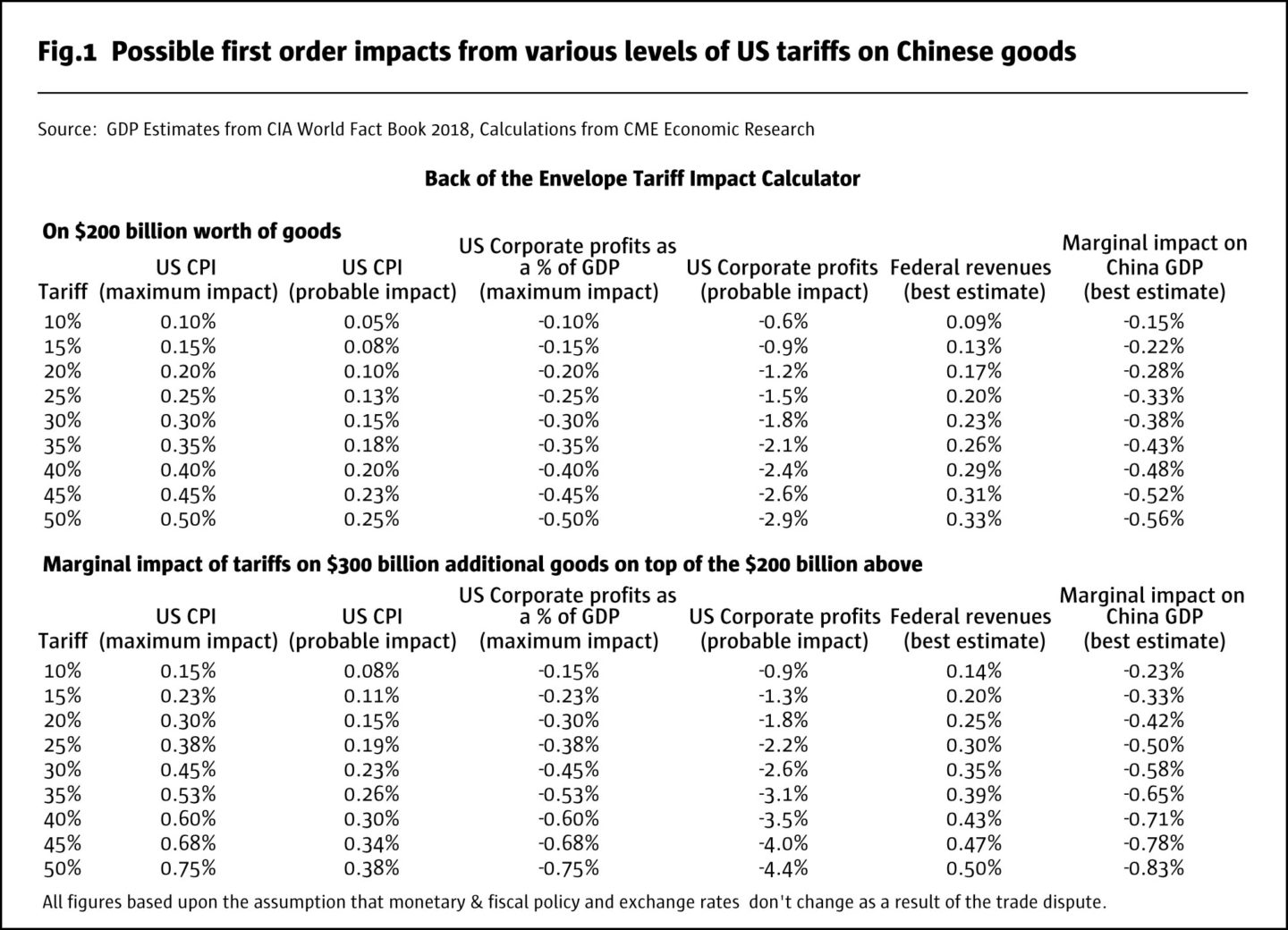 The dispute is not without consequence to the US either. Although advocates of Washington’s approach to trade seem to think that China will bear most of the cost of the tariffs, the tariffs are also a tax on US consumers and on US businesses. Boosting the tariff to 25% on $200 billion of Chinese goods will probably raise US consumer prices by about 0.1% and could shave perhaps 1% of US corporate earnings. If a 25% tariff was applied to all $500+ billion of Chinese goods entering the US, consumer prices could easily rise 0.3% and corporate profits could fall by perhaps 3% or more.

Bear in mind that these estimates are back-of-the-envelope calculations. The actual impact could be either greater or lesser than what these estimates suggest. The case for a greater impact lies in multiplier effects and second- and third-round impacts from the trade war. If hopes for a deal are dashed and further escalation negatively impact business confidence, it could slow investment on both sides of the Pacific more than these numbers would suggest is likely. Moreover, it could lead China to devalue the renminbi, taking emerging-market currencies and commodity prices down with it. This would offset some of the potential for higher US inflation as well as insulate Chinese exports from some portion of the impact of higher tariffs, but it would do so at the cost of harming US exports to other countries and potentially devastate the US farm sector, especially if the Brazilian real and the Russian ruble sink as they did after last year’s round of increased tariffs. Finally, if China growth does slow, it could make it more difficult to service China’s debts. 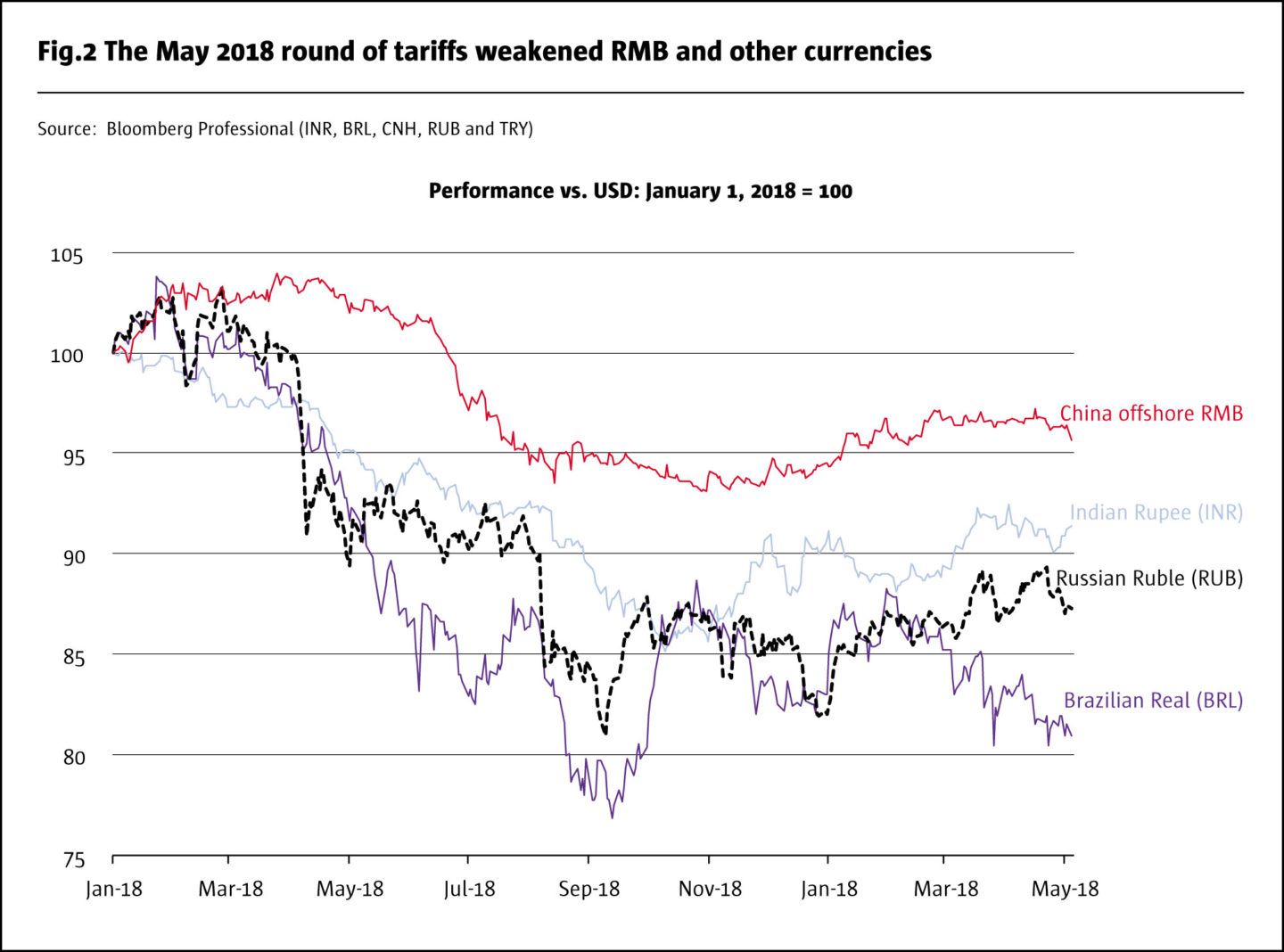 The case that the impact could be less than what we suggest is predicated on the idea that Chinese and US authorities could offset some of the impact of the trade dispute. In the US, for example, the Federal Reserve (Fed) could ease monetary policy – though doing so might risk having to live with increased inflation. Moreover, continued overt Administration pressure on the Fed to ease policy could backfire, forcing the Fed to keep rates steady even if growth does begin to suffer because of the trade dispute, an overly tight monetary policy or other factors. In the current political climate in Washington, it is difficult to see how a fiscal stimulus could be enacted, especially with a 4.5% of GDP budget deficit.

Meanwhile the Chinese have options as well. In addition to currency devaluation, they could ease fiscal policy further, though doing so would risk accelerating the Chinese government’s accumulation of debt. China could also cut interest rates, an approach to easing monetary policy that they haven’t used since 2016. Cutting rates could increase the pressure for capital flight and could exacerbate downward pressure on their currency. Finally, the People’s Bank of China (PBOC) could also further reduce the reserve requirement ratio. 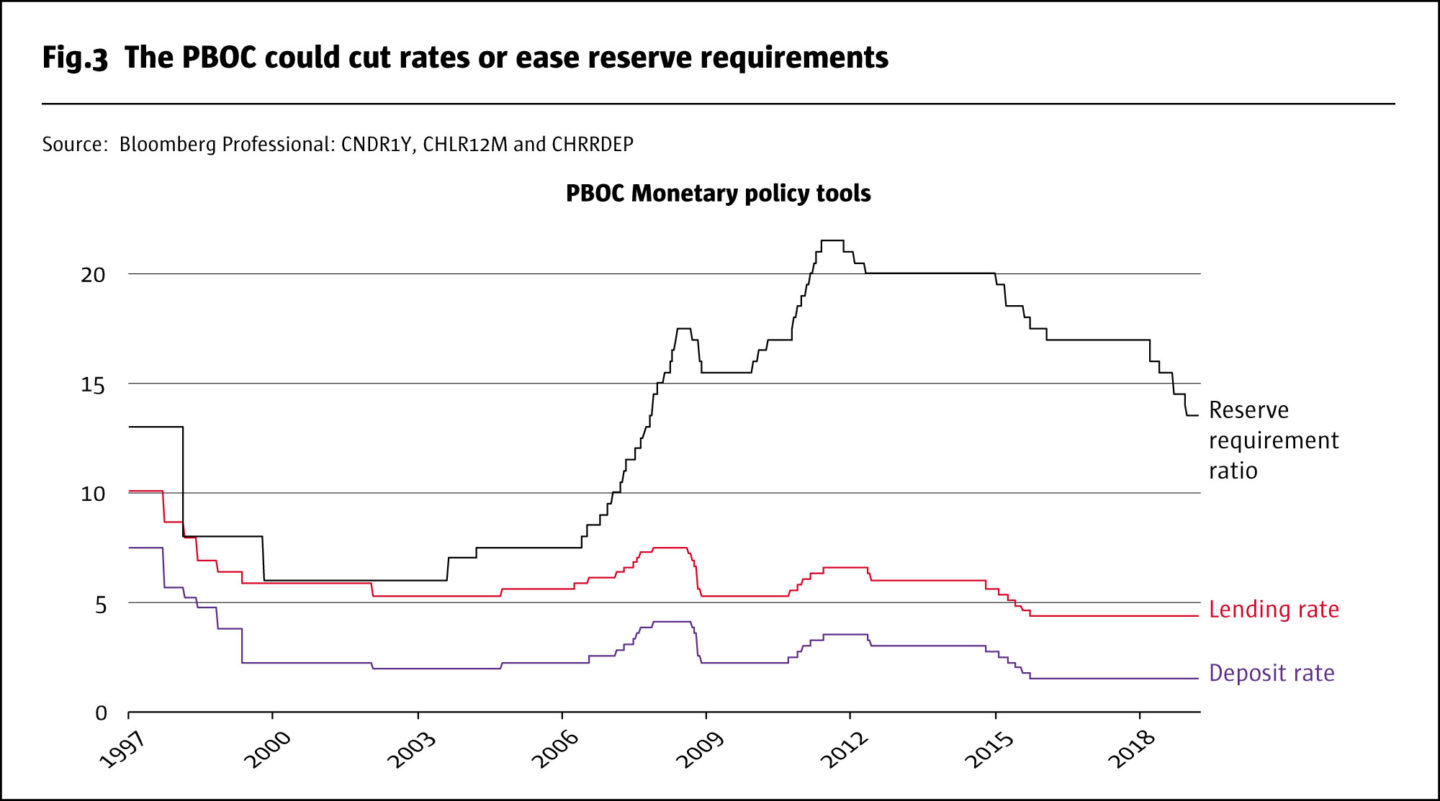 Doing so would allow the banks to lend more but whether they do so would depend upon both the confidence of bankers as well as the appetite of consumers and businesses for more loans. If the PBOC succeeded in creating a lending boom, it could give a short-term boost to growth but at the long-term expense of adding to China’s debt burden. 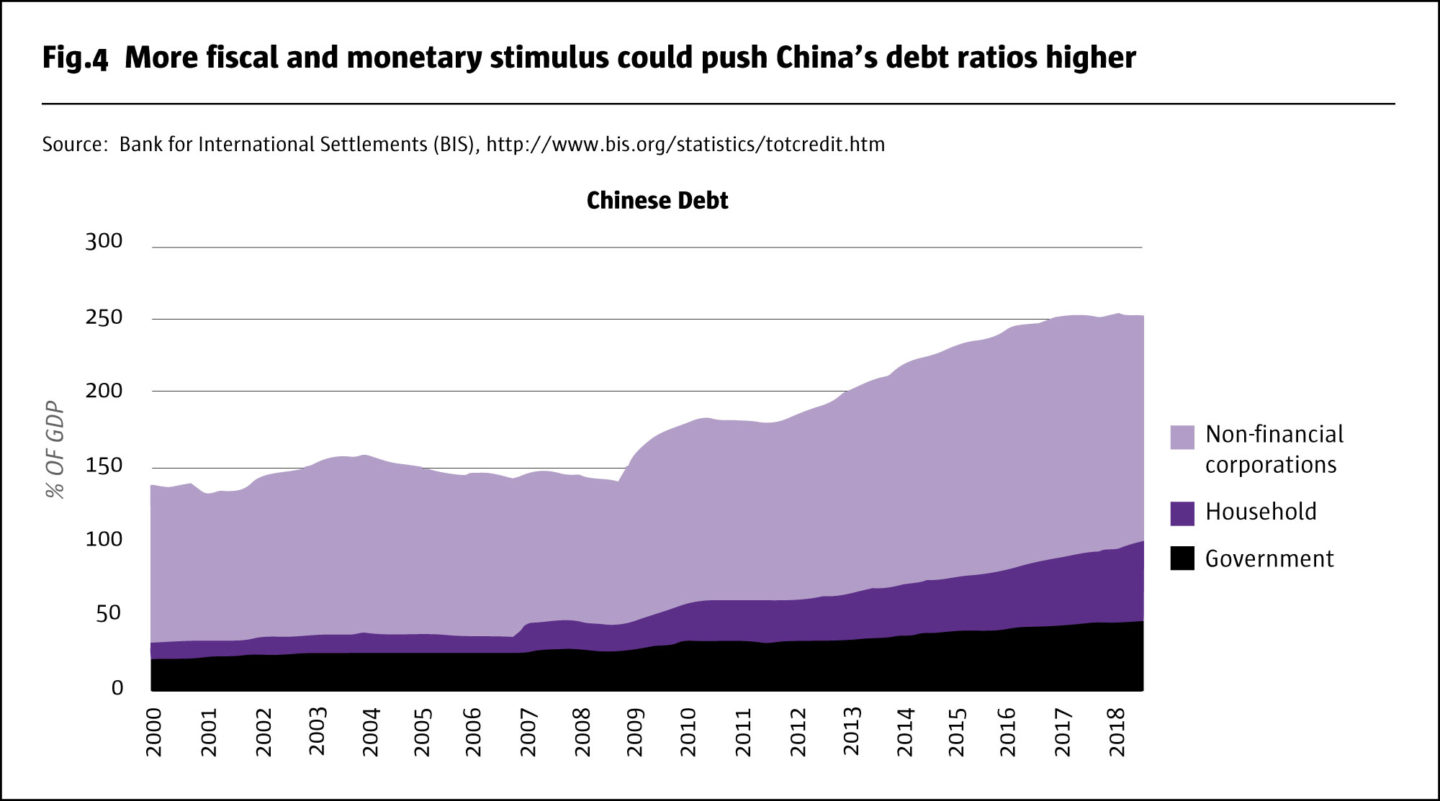 Finally, we could emphasize the strong correlation between Chinese growth and subsequent movements in the price levels and exchange rates of both commodities and currencies of commodity-exporting nations. 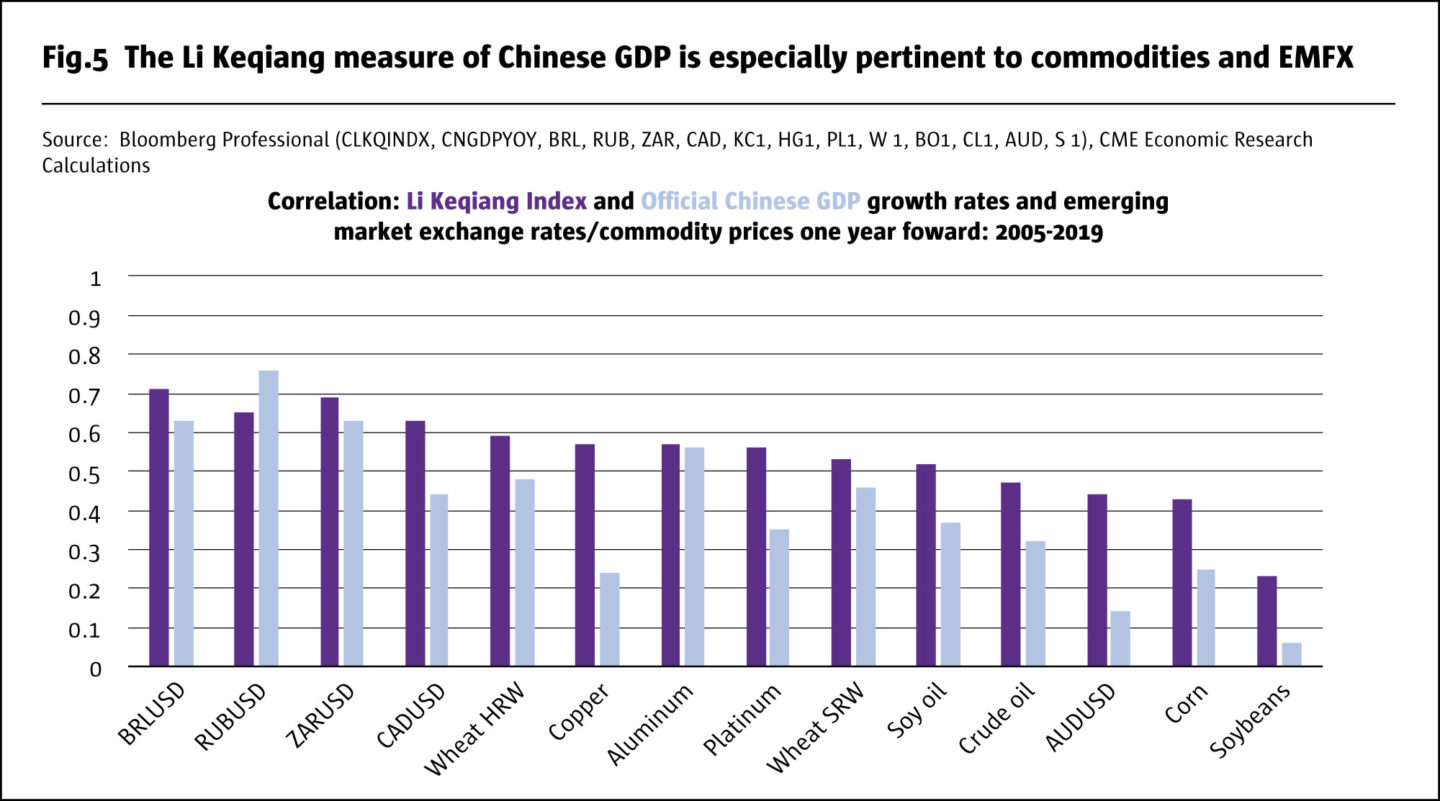 It could be that the trade dispute is resolved quickly and all of this worry is for naught. But if the higher tariffs do come into effect and the talks break down because there is not a face-saving way out for either country, the fate of commodity markets and the currencies of commodity exporting nations will depend to a great extent on how successful US and Chinese policy makers are in offsetting the negative consequences of the trade dispute.