Originally published in the November 2020 issue

The Final Rule will result in a combination of near- and longer-term trading compliance obligations for private fund managers, including the following:

The addition of economically equivalent swaps may necessitate an industry-wide investment in systems and technology that should be assessed sooner rather than later.

Due to the phased-in compliance for “economically equivalent swaps” accounting, and because current exchange-level position limits on the core referenced contracts are at least as restrictive as the new federal requirements, the Final Rule may have a negligible short-term impact on many managers’ trading processes. However, managers should note that the number of contracts subject to position limits that, if violated, would cause a private fund manager to violate federal law (as opposed to an exchange rule) will basically triple in fourteen months.

The longer-term impacts of the Final Rule, and the knock-on impact that the Final Rule will have on the subsidiary position limits regimes maintained and enforced by the futures exchanges (e.g., CME Group and ICE Futures US) and other futures and swaps marketplaces, will affect nearly all managers of private funds and commodity trading advisers. In particular, the addition of economically equivalent swaps may necessitate an industry-wide investment in systems and technology that should be assessed sooner rather than later. Therefore, all managers that trade in futures and CFTC-jurisdiction swaps should promptly consider the CFTC’s new rules and their implications.

Trading in futures contracts has long been subject to positon limits (i.e., an absolute cap on the number of futures contracts that a given fund can hold, irrespective of the size of the fund). The position limits regime, however, has historically been a fractured one, with a small number of position limits at the federal level, a large number of limits being imposed by the exchanges themselves (that extend only to contracts on that exchange), and only limited controls on commodity-linked swaps.

The CFTC has sought to address this situation and to implement a broader-position limit regime for some time. The Final Rule represents the culmination of a decade-long rulemaking process, the Final Rule imposes new trading limits that cover:

The CFTC’s Final Rule specifies limits for the nine legacy positions for the spot month (i.e., the futures contract that is, as of any date of determination, the next contract that is due to be delivered; note that a “spot month” can be longer than one calendar month) and for longer-dated legacy contracts. While only spot month limits are provided for the 16 new core referenced contracts, the Final Rule requires exchanges to establish “exchange-set” position limits or position accountability levels in the non-spot months for the 16 non-legacy core referenced futures contracts and any “associated” contracts (but, again, such limits were effectively already implemented by exchanges on a voluntary basis in response to the CFTC’s previous proposals for amendments to the position limits rules). 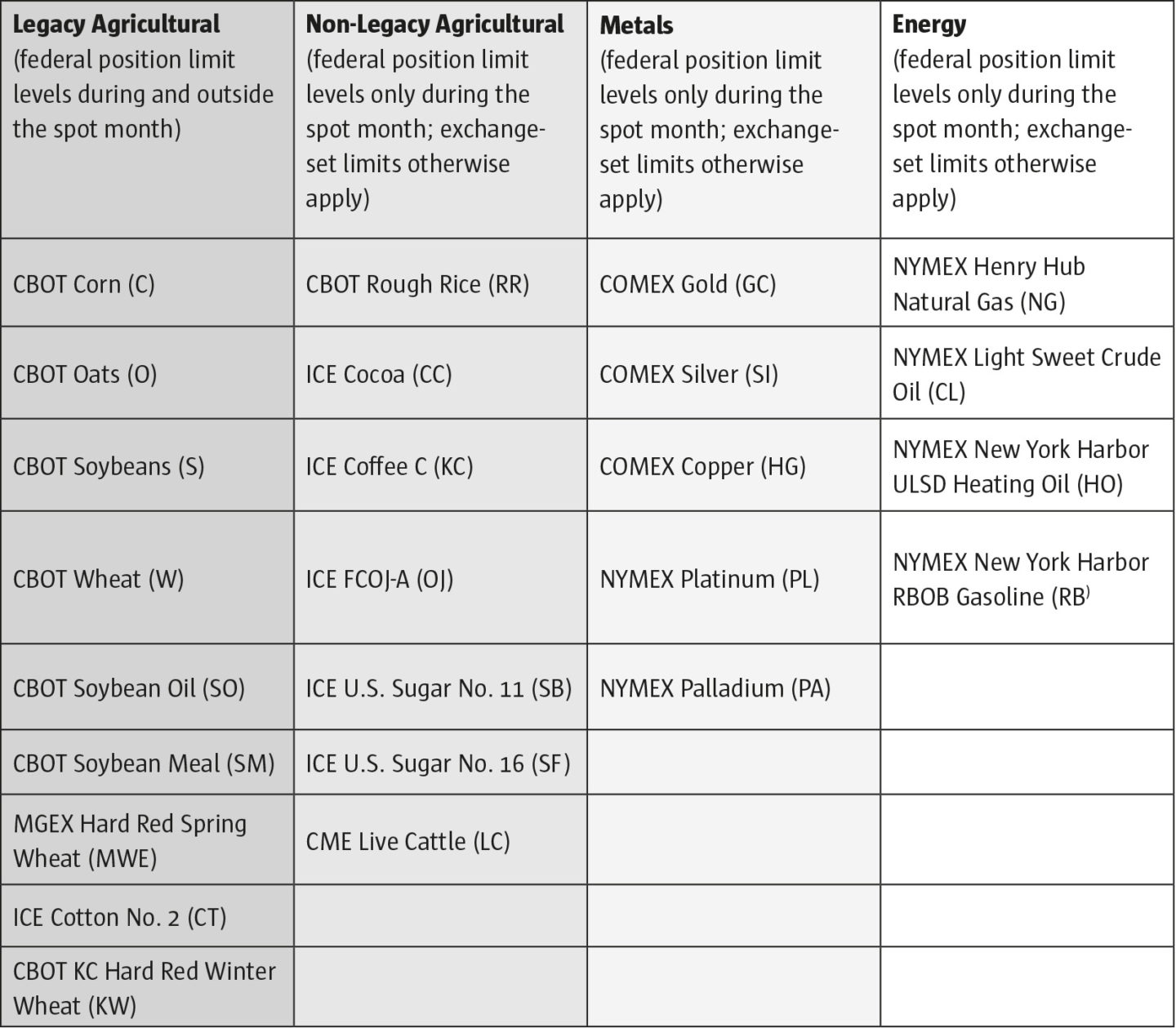 Compliance with the position limits for the new non-legacy contracts (and by extension their associated contracts) is required by Jan. 1, 2022.

Associated Contracts. The position limits applicable to each of the core referenced contracts also apply to any “associated contract,” i.e., a contract that (with certain exceptions) is:

In a major change from the current position limits regime, the Final Rule eventually applies each position limit applicable to a core referenced contract to an “economically equivalent swap”2 (with certain limited grandfathering provisions).

Generally, an economically equivalent swap is one that has the same “material” specifications, terms and conditions as its referenced contract. Precise equivalence is not required for every attribute: minor differences in lot sizes, notional amounts, delivery dates or “post-trade risk management” (e.g., a particular clearing requirement), will not render a swap non-economically equivalent. Swap agreements that are excluded from the CFTC’s jurisdiction (such as physically-settled forward contracts, which do not count as CFTC “swaps” under the Dodd Frank rules) will not count as economically equivalent swaps, even if they might otherwise technically meet the definition.

Compliance with the CFTC’s economically equivalent swap rule for swaps linked to core referenced contracts will be required by Jan. 1, 2023.

While this will not be relevant to all private fund managers, the Final Rule expands the list of designated bona fide commercial hedging exemptions from the position limits regime (which are self-executing and effective absent notice) and provides a streamlined process for petitioning for relief for undesignated hedges.4 Relatedly, the CFTC has also rescinded monthly filing of Forms 204 and 304 with cash market information for entities that avail themselves of the bona fide hedging exemptions.5

Potentially more relevant are exemptions for certain enumerated spread transactions6 and a financial distress exemption7 which permits a market participant to take on positions in excess of federal limits during a default or bankruptcy, on a case-by-case basis. Note that, in practice, a manager may only avail itself of a federal position limits exemption if this would be compatible with exchange-level requirements as well.

While the CFTC’s new position limits for the 25 core referenced contracts are essentially consistent with, or are more lenient than, the exchange-level position limits currently in effect, this expansion will increase the likelihood that a position limits violation could expose a manager to a CFTC enforcement action (in addition to sanctions from a futures exchange).

The “economically equivalent swap” requirement, which will not take effect until 2023, increases the risk of a CFTC-level violation and may implicate serious considerations by many managers of their compliance programs and portfolio management surveillance and reporting tools. As a result, all managers of private funds that trade in futures contracts, options on futures contracts or swaps should (1) promptly identify their direct and derivative exposure to the 25 core referenced contracts and (2) begin discussions with counterparties, software vendors, administrators and other service providers to determine what trading, accounting, compliance and other system changes will be necessary to track exposures and comply with the changes effected by the Final Rule.