Originally published in the April 2018 issue

Since launch in June 2015, the Nomura Equity Volatility Risk Premium (“NEVRP”) daily-dealing UCITS strategy has seen the best of times and the worst of times.

Its 2017 performance of 24.9% and volatility of 5.35%, delivering a Sharpe ratio of 4.65, earned it The Hedge Fund Journal’s UCITS Hedge 2018 award for best risk-adjusted returns in the volatility arbitrage category. And early 2018 has provided a useful stress test for the strategy. As the VIX spiked to 50 on Monday, February 6th, NEVRP saw a loss of 23%, which was mostly implied mark to market related. (This was consistent with Nomura’s own, internal stress tests). The following day, performance bounced back by 21%, as the VIX settled back down in the 20s. After the February 2018 drawdown, Nomura garnered some inflows from investors who judged that the surge in volatility provided an opportune moment to invest.

The Fund was also tested within months of its launch. In August 2015, the sudden spike in volatility cost it around 13%, and this had been recovered by early 2016. Clearly, the return profile is correlated with equity and credit markets, but Nomura argue that it can recover drawdowns more quickly than a long-only holding in conventional asset classes.

Nomura view the gap between implied and realised volatility as a persistent risk premium, akin to an insurance premium embedded in the price that options trade at, which can be harvested. “Historically there has been a positive pick up between implied and realised volatility around 80% of the time,” says Jean-Philippe Royer, Chief Executive Officer at Nomura Alternative Investment Management, Europe Limited (“NAIM”). The strategy is not designed to be vega neutral, but it is not taking a directional view on the level of implied or realised volatility either. Rather it just seeks to extract the difference between the two. This is a plain vanilla strategy, which is not expressing views on skew or term structure, on differences between regional volatility markets, trying to pick optimal strikes or delta hedging at optimal points in the day by gamma trading, arbitraging OTC against exchange traded instruments, or a whole host of other volatility strategies. Nor is it trading volatility across multiple asset classes or equity indices – it only trades volatility on the S&P 500 US equity index. (Royer doubts whether adding European equity volatility would provide much diversification and finds Asian equity volatility markets to be less liquid).

Nomura are confident that structural forces should ensure that the volatility risk premium is here to stay. Regulations such as Basel III and Solvency II, both reduce the supply of volatility protection – and increase demand for it. “It is more costly for market makers to warehouse the risk now, due to regulatory changes, which also force more investors, such as pension funds and insurance companies, to buy portfolio insurance,” explains Royer. If some of the larger pension funds may be willing to implement a volatility strategy on their own, those who cannot could consider the Nomura strategy.

Various types of volatility risk premiums (and other sources of risk and return) can be accessed through different volatility instruments and strategies. Nomura argue that variance swaps provide one of the cleanest, purest and simplest ways to pursue their objective and believe that alternative approaches – such as shorting VIX futures or selling delta-hedged options – are not ideally suited to harvesting volatility risk premiums.

Shorting VIX futures was the strategy pursued by the exchange traded note (ETN), with ticker XIV, that was closed down by issuer Credit Suisse. For some observers, the demise of XIV is sufficient to rule out the strategy of shorting VIX futures, though a handful of other short volatility ETNs/ETFs still exist, generally down around 90% in the first two months of 2018.

In fact, a more sophisticated strategy of shorting VIX futures need not be doomed to blow up, if tail risks are hedged by, for instance, owning call options on the VIX future. Nomura identifies other issues with shorting VIX futures that complicate the trade however. “It is not a pure play on implied minus realised volatility. It is a strategy on the shape of the VIX futures curve,” points out Royer. A steepening, flattening or inversion of the term structure can change the optimal way of implementing the strategy, and require more trading and portfolio adjustments.

Selling delta-hedged options is also more complicated than it may sound. “It is in practice impossible to continuously hedge, meaning that some gap risk is being taken. It is also operationally complex, as the delta hedges need to be adjusted, daily or intraday, and throughout the volatility surface, and is prone to optimised backtests” explains Royer.

The variance swaps strategy is conceptually simpler and purer, but not entirely without its own complexities. For instance, Nomura diversifies its portfolio of variance swaps over multiple strikes and maturities, partly to avoid the ‘pin risk’ of having a concentrated exposure to a particular strike or maturity. The strategy thus owns a matrix of overlapping variance swaps positions between one day and two months ahead, at a ladder of strike prices, with a systematic daily implementation. “They are held to expiry to capture the difference between realised and implied volatility in a disciplined approach, which also reduces transaction costs, unless they need to be sold to meet redemption requests.”

Additionally, operational routines and best execution were challenges when Royer had experience of directly implementing a similar strategy: “we ended up with a big portfolio of variance swaps, which was resource intensive in terms of infrastructure, IT, and risk management. Using a QIS provider such as Nomura brings benefits: it avoids a lot of this operational burden without compromising on the quality of execution,” he says. 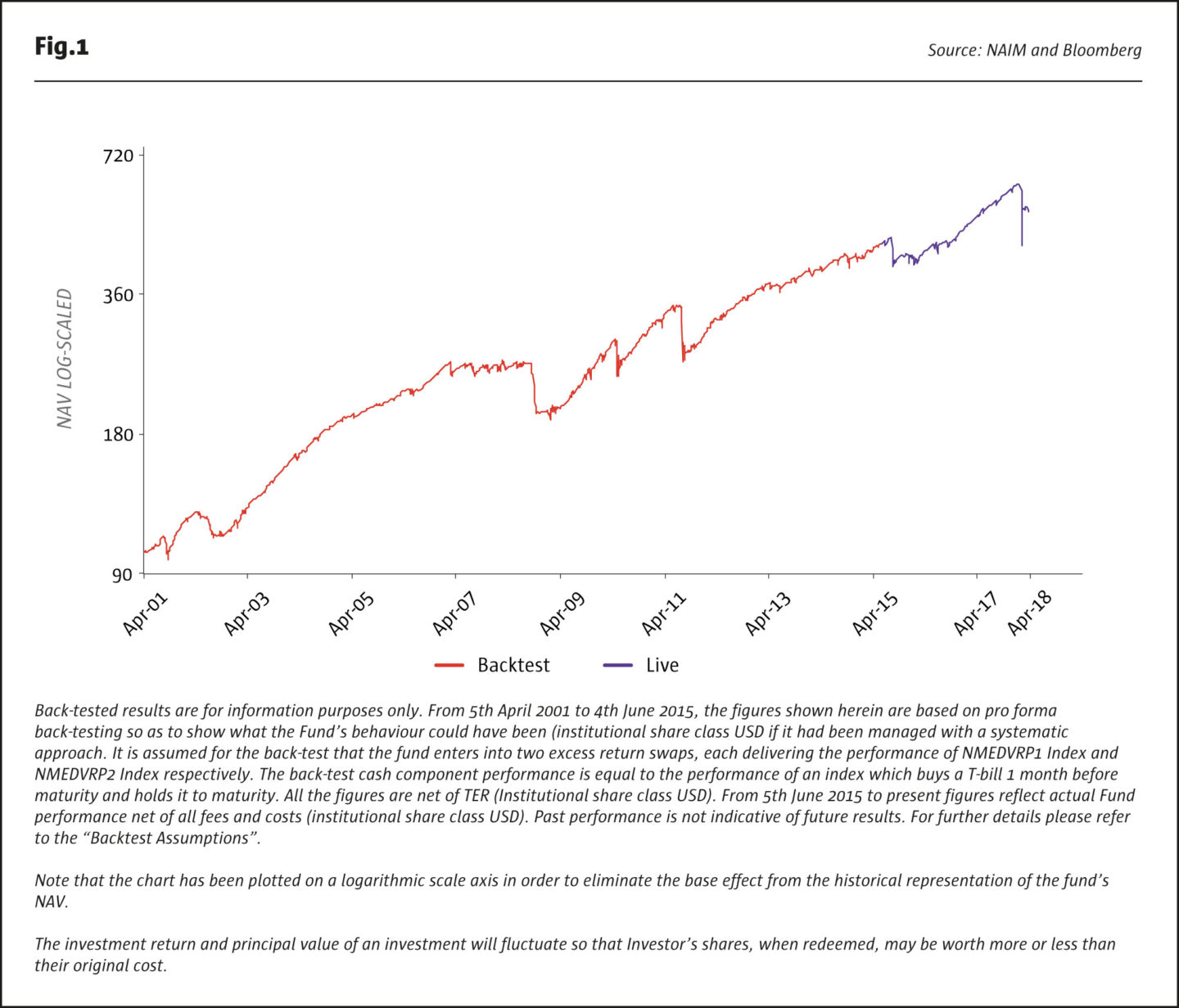 Nomura QIS acts as market maker, delivering a committed price, and performance level, on the swaps with NAIM. The strategy is transparent, published on Bloomberg, and can be accessed by investors directly via swap with Nomura QIS. However, Royer claims “our fund is the only one delivering a comprehensive access to the equity volatility risk premium in a UCITS daily liquid format”.

Though some variance swaps do now exist as exchange traded futures, the strategy implemented by the fund is based on over the counter (OTC) instruments. Nomura QIS is currently the only counterparty that NAIM trades with (the two are of course separated by “Chinese walls”) but other counterparties may be added as assets grow. The counterparty exposure is 100% collateralised by cash and bonds, as is typical for UCITS.

Cash is an incremental source of returns. The cash sits in investment grade bonds, which can include Treasury Bills, US agencies (ie Fannie, Freddie) municipals and supra-nationals. In 2017, the bonds portfolio of the Nomura Equity Volatility Risk Premium UCITS Fund, returned +1% from 29/12/2016 to 29/12/2017 and very low duration. It was invested in short-dated US Treasury bonds. This return has outperformed the index that NAIM uses internally for indicative benchmarking: the Bloomberg Barclays Short Treasury TR Index, which over the same period delivered a performance of +0.81%.

The vehicle has an anti-dilution levy, which is in effect a variable bid/offer spread. This is so that existing investors do not bear the transaction costs of buying and selling linked to other investors’ inflows and outflows. In 2017, the typical anti-dilution levy was around 30 basis points, but during the February 2018 volatility spike it had temporarily blown out to about 1%.
It is these transaction costs that partly act as a constraint on capacity. In mid-February 2018, the strategy manages USD 33 million, and Royer estimates that capacity could be between $200 million and $500 million, in current market conditions. “Capacity could be larger if we modified exposures and maturities,” he adds.

The UCITS presently offers USD, Euro, GBP and JPY share classes. Management fees of 0.7% for the institutional share class and 1.2% for the advisor share class, with no performance fee for either, are intended to be competitive. They are clearly lower than typical hedge fund fees and also somewhat below what some other alternative risk premia or style premia funds charge (but higher than many ETFs). Managed accounts could also be offered in response to investor demand.

Currently, NAIM’s risk premia UCITS offering has two main products, which are viewed as being complementary. The equity volatility risk premium strategy is a source of carry or risk premium, which clearly has a negatively skewed return profile. Conversely, the trend-following strategy managed by NAIM in the Nomura Cross Asset Momentum UCITS Fund, which runs around USD 500 million, has a positively skewed return profile. “Momentum and volatility risk premia are essential components of a portfolio allocation,” says Royer.

Momentum and volatility risk premia are essential components of a portfolio allocation.

Though NAIM’s take on risk premia is essentially systematic, discretion determines the design and ongoing evolution of strategies. Royer argues that this offers the best of both worlds: “we use systematic risk premia strategies as building blocks for our portfolios, but our Investment Committee uses some discretion to modify allocation or for some strategic decisions”. For instance, adding credit to the Cross Asset Momentum trend strategy, as a fifth asset class in September 2017, was worthwhile. “We were able to do this in full adherence with the fund’s investment objective, consistent with a long-term investment approach,” adds Royer.

NAIM are among a growing number of alternative asset managers that are signatories of UNPRI (United Nations Principles for Responsible Investment) guidelines on ESG (Environmental, Social and Governance) investing.

Prior to NAIM, Royer worked at Lehman Brothers Asset Management, structuring quantitative investment solutions, and before that he was a fund structurer developing capital protected funds at BNP Paribas Asset Management. Earlier, he had been an FX options trader and a private banker.

“Going forward, we are working on model portfolios to allocate amongst different risk premiums in the most efficient way,” says Royer.

In particular, Royer observes that “many systematic strategies and indices can become less relevant when regimes change. For instance, some did not work so well when QE was introduced”. NAIM’s long term aim is “to deliver clear and comprehensive access to risk premia, with a fiduciary approach,” he states.

NAIM is also working on “an evolving asset allocation model that can deliver some performance in a rising rate environment, where bonds and equities may be highly correlated”. Indeed, in February 2018, we saw a sell-off in government bonds coincide with, and arguably cause, a rout in equities, suggesting that investors cannot rely on government bonds to be a safe haven. Investors should watch this space for launches from NAIM.