Sneak Peek into Jobs Report Due April 5 and Beyond

What will happen to US employment gains

The past two employment reports took markets on a wild ride, with 311,000 jobs created in January but only 20,000 in February. If you average the two, however, US employers have been creating about 165,000 jobs per month so far in 2019, which is close to what our model suggests is the most likely outcome for the March employment report due out on April 5: +157,000 jobs. It may sound unusual to forecast the March jobs number this early. The month is not even half over, and no consensus estimate has yet formed. Therein lies the beauty of our simple three (and a half) factor model of non-farm payroll (NFP) monthly job gains and losses: using just three market-based factors whose data isn’t even especially recent, it explains nearly 75% of the month-to-month variation in NFP – better than the consensus estimate itself. 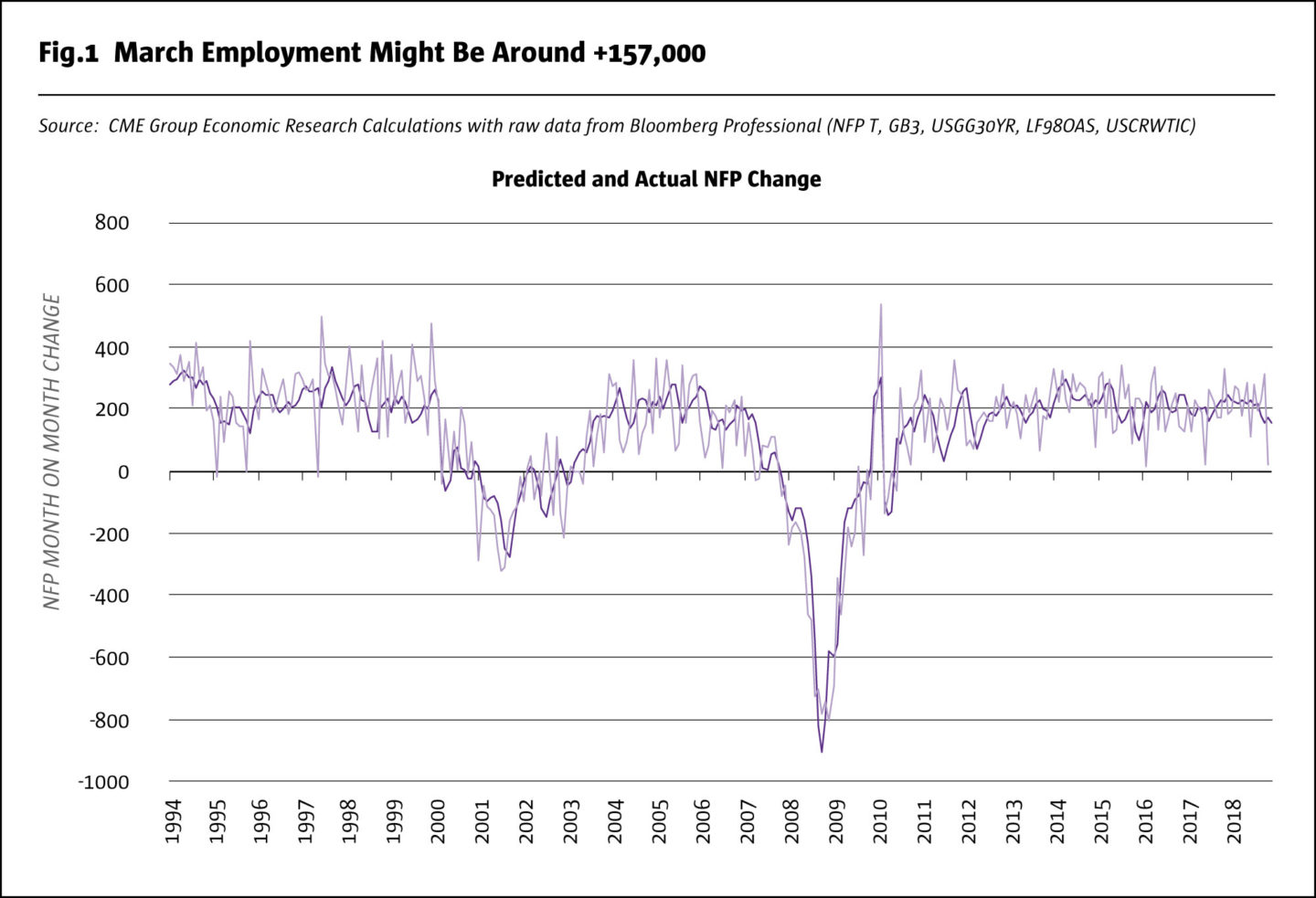 What’s more interesting than our model’s estimate of March job gains is what it says about how employment will evolve during the rest of 2019 and 2020 and why. The model suggests that US employment gains will gradually slow as a result of the Fed’s recent tightening cycle – and that relatively optimistic scenario assumes that credit spreads stay close to where they are currently. If credit spreads widen too much, US job creation could find itself in negative territory.

The models three major factors are: 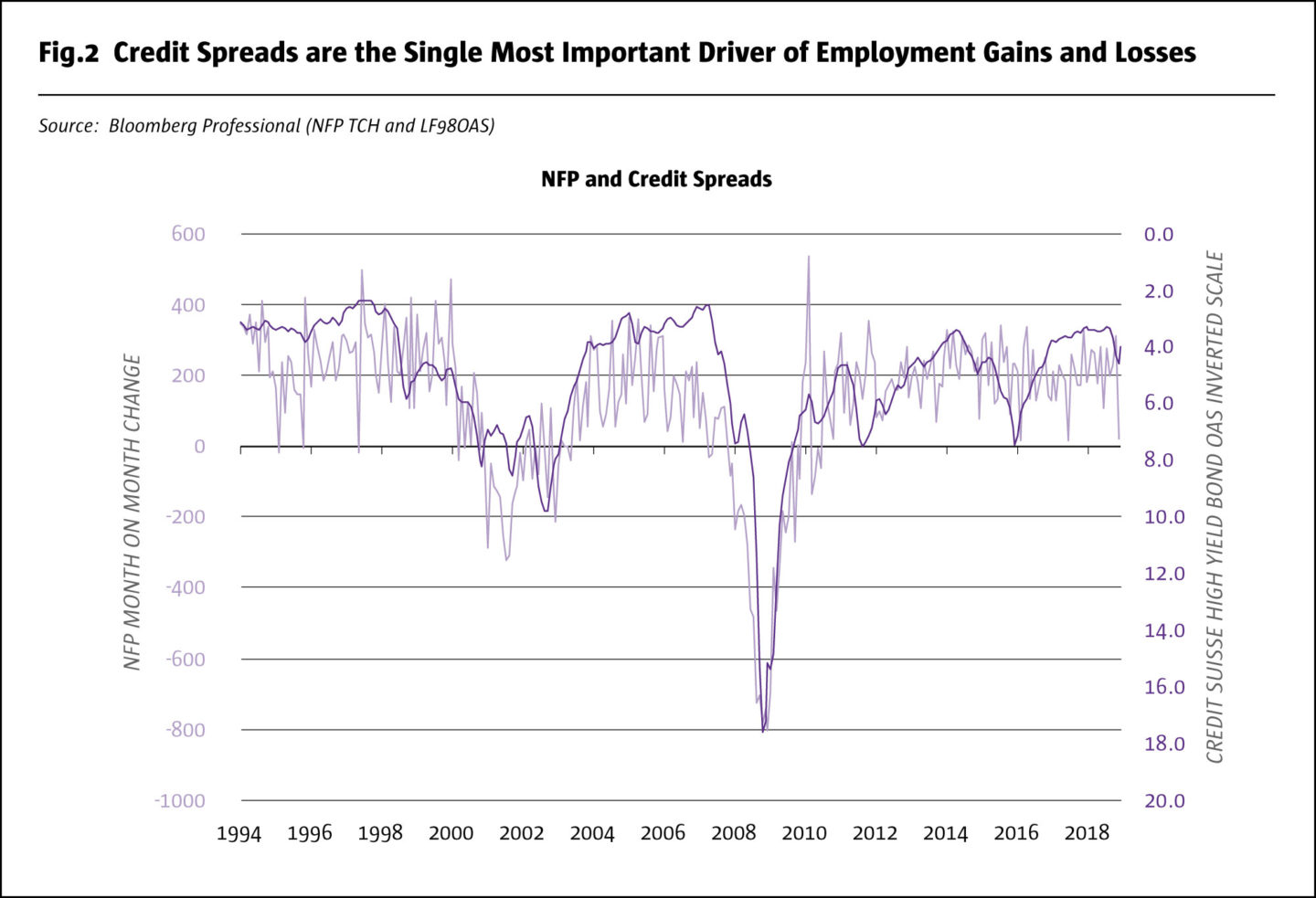 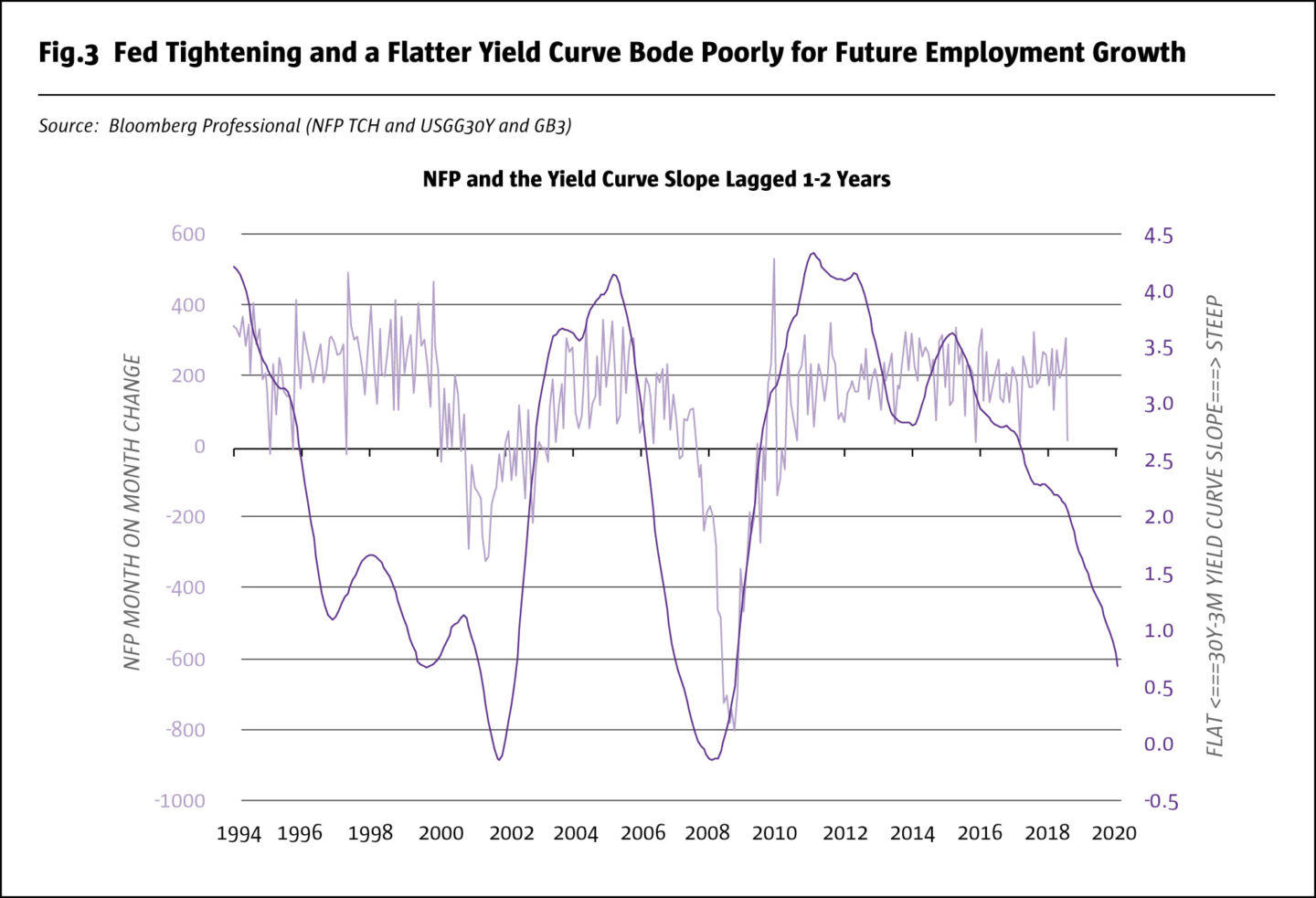 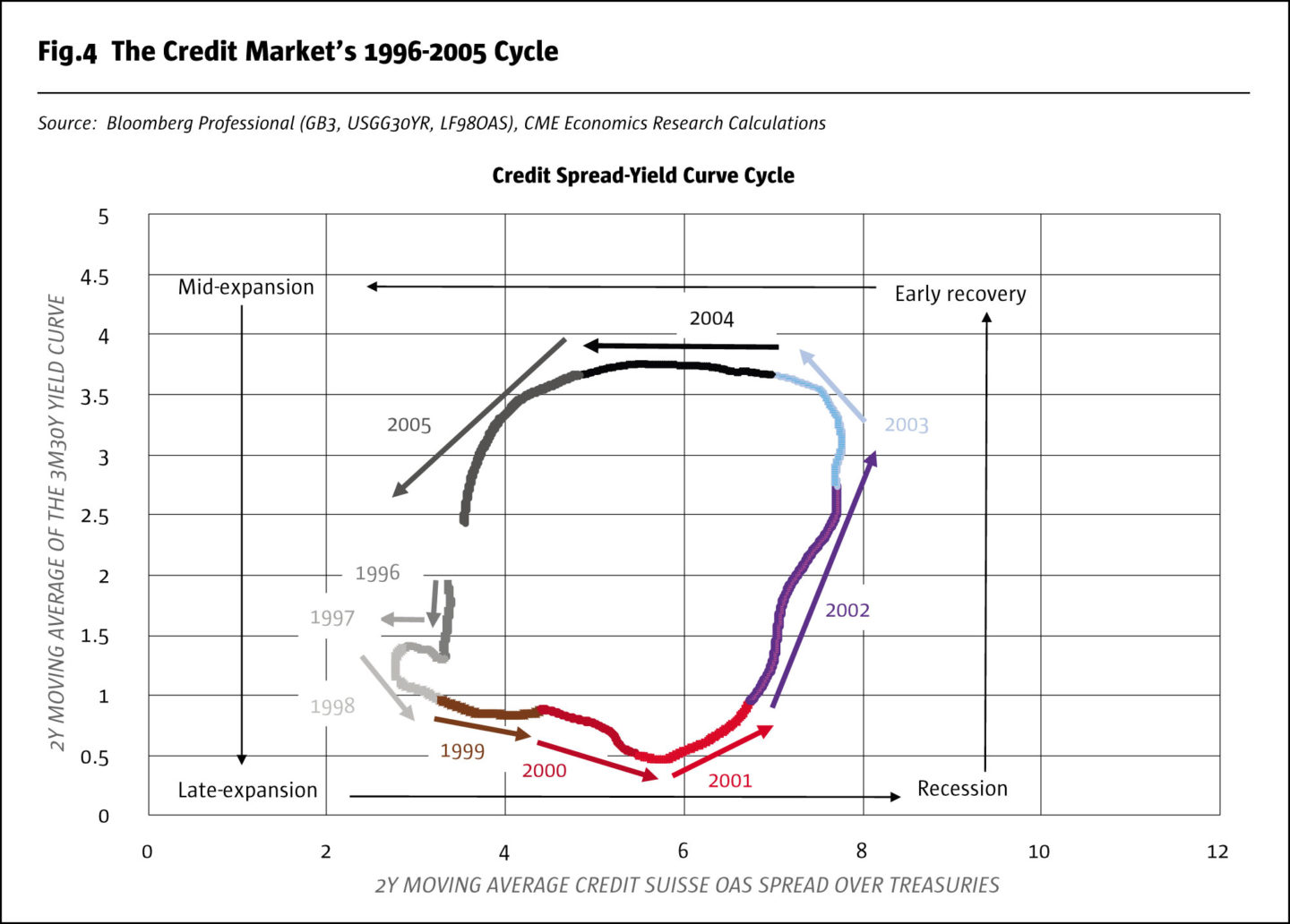 The remainder of the model is the residuals of the three previous month’s forecasts and a dummy variable to help explain exceptional job gains and losses during the decennial census hiring and layoff periods. That factor comes into play next in the spring and summer of 2020.

Unlike our model, which assumes that month-to-month changes in non-farm payrolls are a function of past credit spreads, yield curve shapes and movements in oil prices, the credit-unemployment-yield curve relationship is exactly that: a relationship and not a function. In mathematics, functions are not allowed to bend back on themselves, crossing the same territory twice. While functions are undeniably useful, they can also limit analysis as to what the true relationship between variables is, especially if that relationship involves cycles and feedback loops. When it comes to Fed policy, credit spreads and employment markets, they are all functions of one another and they are locked in a cyclical feedback loop that goes like this: 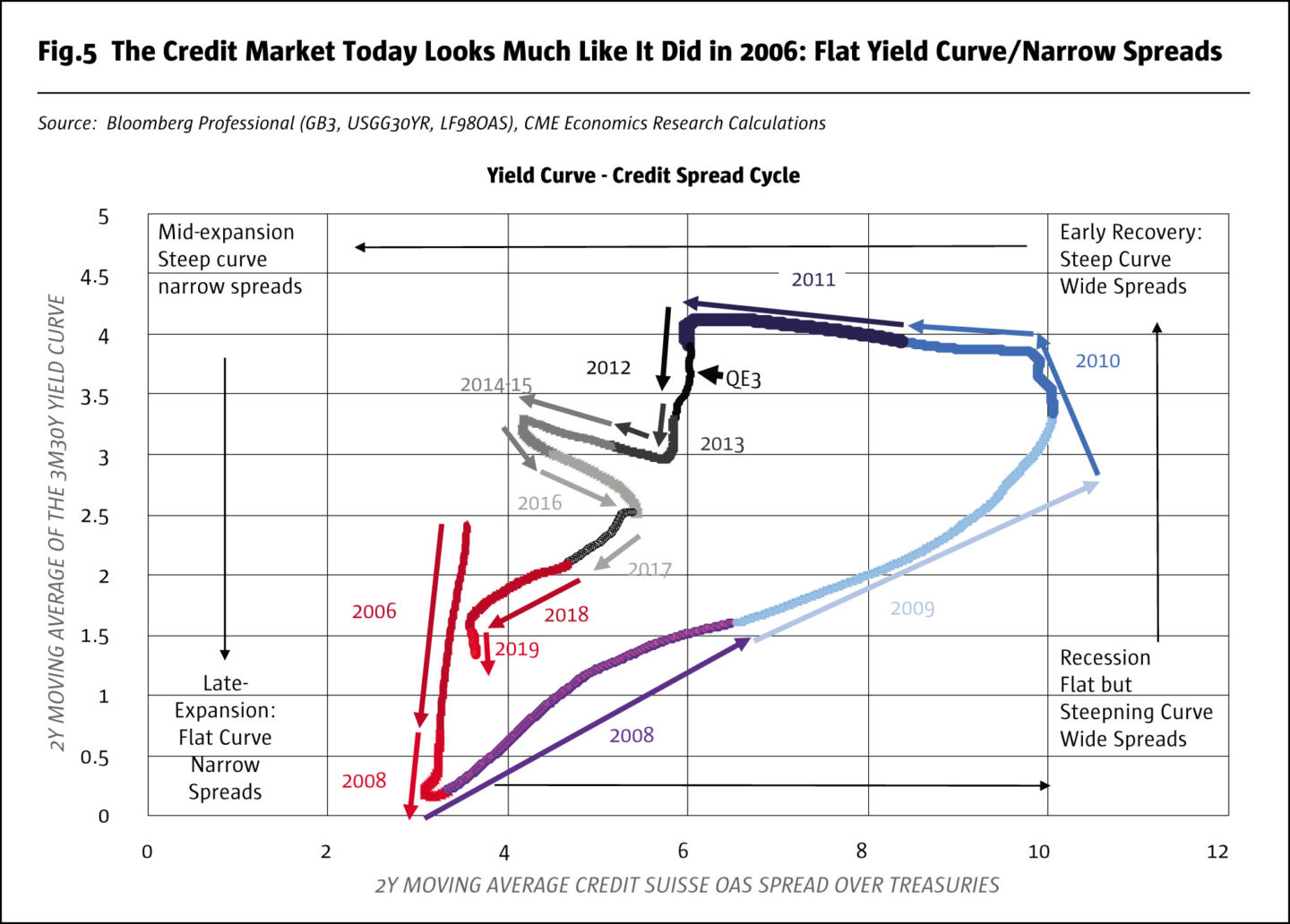 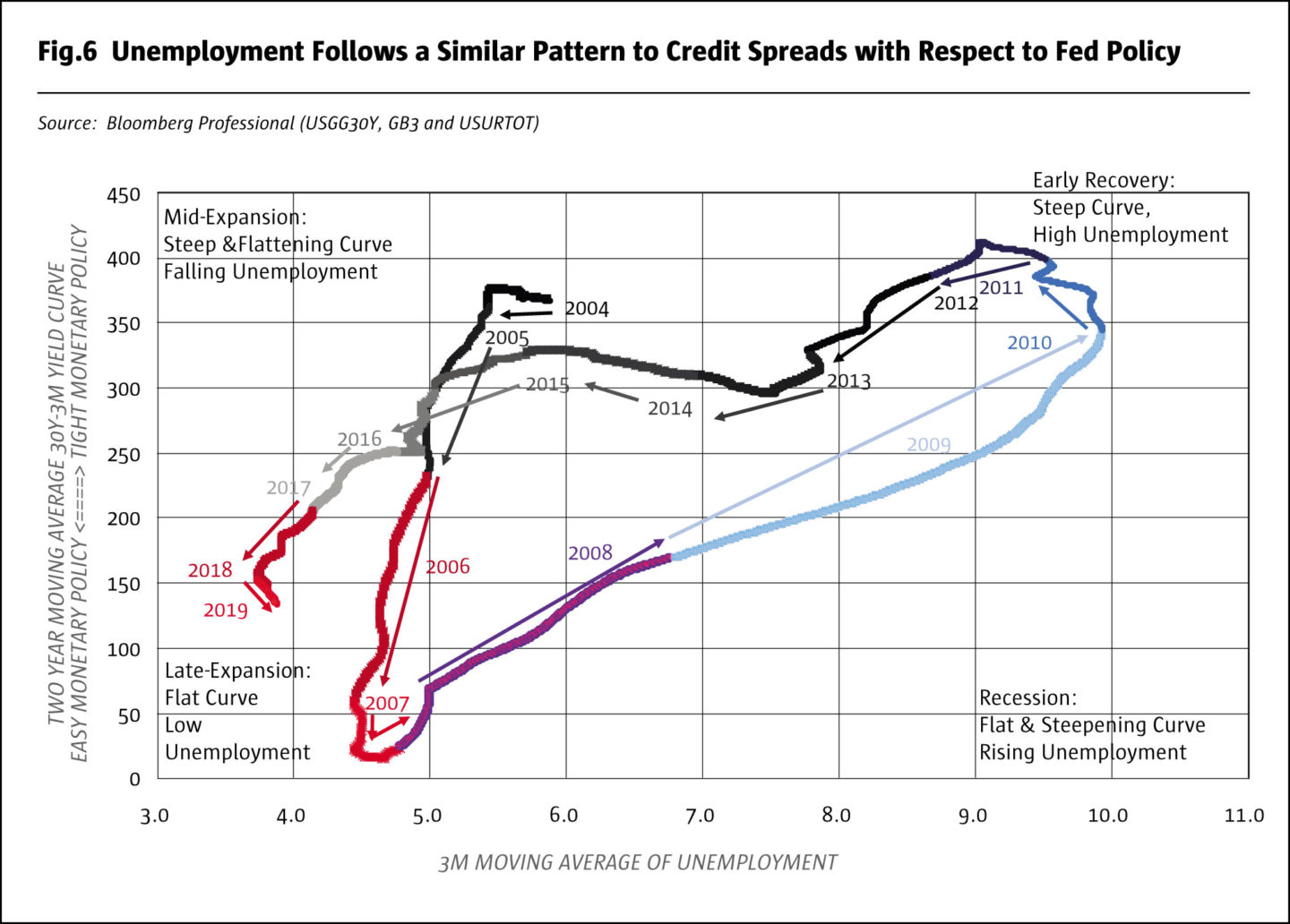 As of early 2019, it’s possible that we are already past the narrowest point for credit spreads. If so, that could be bad news for employment creation. If the Fed’s tight monetary policy (which they assume to be “neutral”), provokes a widening of credit spreads, the economy could quickly find itself with negative net job creation numbers. By our calculations, even just a 2% widening of high yield bond spreads over Treasuries from 4-6% could be enough to put job creation close to zero. In 2015 a credit spread widening of greater magnitude was absorbed by collapsing oil prices and an exceptionally steep yield curve. Oil prices aren’t guaranteed to offset wider credit spreads again and a steeper yield curve isn’t in the works unless the Fed rapidly cuts interest rates. In fact, only Fed easing can really derail the cycle that threatens to send credit spreads and unemployment spiraling higher if monetary policy were to remain too tight for too long.